and their role in recording Scottish music

During more than 110 years of existence the British recording industry has recorded thousands of artists performing in a bewildering range of styles and genres. 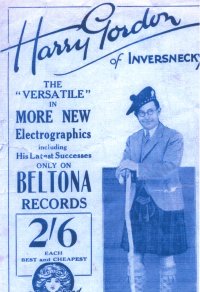 Driven by the profit motive, it actively sought to cater for every market that could be identified; if they could press and sell 200 copies (or fewer) of a record for a profit they would certainly feel it worthwhile to do so.  The hope was that customers, having seen a record they would like in a catalogue or supplement, would then buy a gramophone on which to play it, which would in turn, hopefully lead to the sales of more records.

Throughout Europe the recording engineers pursued this policy, and amongst the genres recorded was the folk music of the country in which they were operating.  As a result we have 100-year-old recordings of Spanish flamenco singers, Hungarian gypsy bands, Bavarian Country bands and much more.  However, for some unknown reason the folk music of the British Isles was almost totally ignored.  Apart from the famous 1908 G&T (Gramophone & Typewriter Company) records by Joseph Taylor, and various Scottish melodeon players on a variety of labels, little or no 'folk' music was commercially recorded until the 1920s.  Most sung performances of Scottish songs were by classically trained singers drawn from the concert stage whilst folk dance music was, as often as not, performed by military and brass bands.  The artists used could generally be found living in London and if a Scots artist couldn't be found, then any English performer could fill the bill. 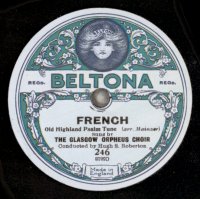 Apart from a solitary visit to Glasgow by the Berliner Company in 1899 and one by the Homophon Company, also to Glasgow, in 1909, it would be many years before any record company ventured across the Border.  Although a large number of record brands existed at this period the repertoire, as far as Scots music was concerned, varied very little from company to company.  Some cover versions of Harry Lauder hits, Burns' ballads by baritones and sopranos and perhaps a few bagpipe records were the general extent of their Scottishness.  In the case of recordings of solo bagpipers and bagpipe bands, the majority of these were provided by various battalions of the Scots Guards who were always conveniently available.

This was still the situation in 1923 when Beltona placed its first advertisement in the Glasgow Herald of 10th. December 1923. 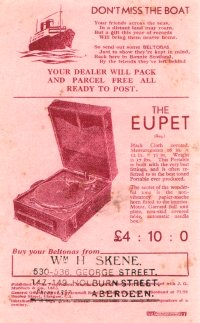 This advertised the first records made by the Glasgow Orpheus Choir, which, even then, had a reputation for excellence.  The catalogue in those days varied very little from that of its competitors except that it contained some 20% of Scots material, a figure that could only be matched by Regal, a cheap subsidiary of Columbia records.

Beltona was a part of John G Murdoch & Co Ltd, a company that had been founded in 1871 as a printer and publisher.  Later they branched out into music publishing, importers, retailers and manufacturers of organs and pianos, agents for Edison and Columbia, musical instrument wholesalers, pram, mangle and toy manufacturers and more.  Eventually they would have all these diverse enterprises plus a large chain of retail music and furniture shops.  This then was the background from which Beltona emerged.

After Beltona's initial block release of some 250 records of assorted repertoire a steady trickle of Scottish material continued to be released much of which was by studio orchestras or trained singers.  In these early days Beltona was still an all-purpose label that was trying to appeal to the general record buying public of Britain rather than just to that of Scotland.  In late 1927, however, a major shift took place.  In mid 1927 the Vocalion Record Company who had provided the recording and pressing facilities stopped all contract work and Beltona had to seek a new provider.  This turned out to be J E Hough & Co Ltd, producers of Edison Bell Winner records.

Tom Walker, born in Dundee in 1888, had worked for Murdoch's since 1914 in the capacity of salesman for the whole of Scotland and so had a thorough knowledge of the Scottish musical scene.  It seems highly probable that he was the man who persuaded the Murdoch family to change their marketing strategy from trying to be all things to all people to being a brand that appealed primarily to Scots. 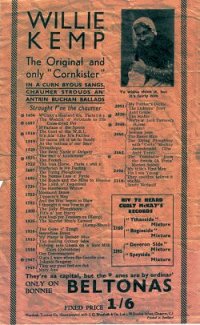 In the space of a couple of years (1927-29) the percentage of Scottish repertoire shifted from 23% to 75% and that of native artists from 44% to 92%.  In itself this was significant but what was just as important was a move to a more vernacular style.

Suddenly records were being issued that would have little or no appeal outside Scotland and even in Scotland would have perhaps been regarded with some suspicion by the more genteel record buyer.  The most popular of these new artists was undoubtedly the Aberdeen music hall artist Harry Gordon who was to be the mainstay of the catalogue for many years but he was in the company of such diverse artists as Dufton Scott (dialect monologues), Alec Sim (fiddle), John Henry (melodeon), Rev Dugald McNeil (gospel singer) and Donald Davidson (mouth organ).

An important session took place in July 1929 when the bothy ballad singer Willie Kemp made his first records.  Beltona was the first record company to record this genre and remained so until the post war period.  Willie and his cousin George Morris were to remain popular for many years; indeed some of their material was re-issued on LP.  Their versions of The Muckin' o' Geordie's Byre, The Barnyards of Delgaty, Drumgeldie and many other songs probably helped to keep the tradition alive and perhaps provided the inspiration for many 'folk' artists. 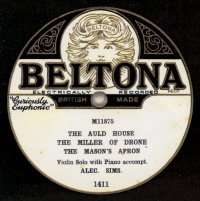 The Scottish Country Dance Society was formed in November 1923, one of its founders being J Michael Diack, a director of the Glasgow music publishing house of Pattersons.  He arranged for Beltona to record twelve sides of dance music by the Sutherland Orchestra (consisting of London studio musicians) to be recorded on behalf of the Society, the records would be for sale in the normal way.  So rapidly did the Society expand and so well did these acoustic records sell that in April 1927 fresh sides were made by the electrical method.  However, by now a new deal had been struck and the records were issued in the 'De Luxe' 6000 series at a price of 3/- rather than 2/6.  Once again, the records were advertised for sale in the general catalogue but now the Society would receive a royalty payment for every record sold. 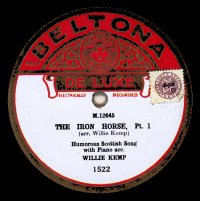 Further sessions fronted by the pianist Annie Shand and the fiddle player George Davie would be held up until 1939.  One unfortunate result of the influence of the Society would be an obsession with strict tempo that cast, and still does, a rather dead hand on most Scottish country dance bands.

When the company switched to the almost exclusive use of Scottish artists it also started to use many more part-timers rather than full time professionals.  Of those artists for whom some biographical information has been uncovered, some 21% from the period May 1923-July 1928 were semi-professional whilst in the period July 1928-November 1945 the figure was 60%.  Many of these artists had had no formal musical training and many could not read music, most had learnt their repertoire by oral transmission.  For example, neither Jim Cameron nor Jimmy Shand could read music so that when Shand visited the Cameron Family, Jim's daughter May used to play new tunes for them learn. 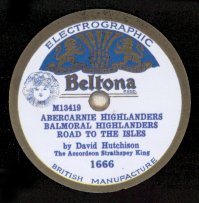 The same situation also applied in the Powrie household where young Ian would play new tunes for his father, William.

The previously mentioned Tom Walker acted as salesman, A&R man and talent scout for Beltona records.  In the course of his travels throughout Scotland he would be asking the record dealers if there was any local talent worth recording and at the same time he was keeping his eye on what was happening at the many music competitions that were taking place.  Jim & May Cameron, Angus Fitchett, Archie Grant, Allan MacLean, Ian Powrie and others all won medals and cups at local music festivals and Gaelic Mods.  As an example of an artist with a very local appeal one could instance James Dalgluish, known as Allan Ramsay 'The Border Tenor' whose records included such titles as The Hawick Common Riding and The Peebles Beltane Queen Festival.

Beltona advertising material was generally written in a chatty style and made a point of saying the hometown of the artist. 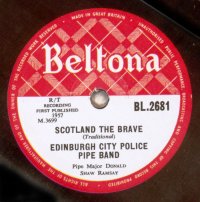 Boggyclairt's Roup and Pickin' the Banes by Peter Murcar (of Aberdeen) was described as '"The Orra Loon wie the daecent strouds" - a real topper.  Take home some happiness, and all will enjoy "Pickin' the banes"'.

Many records were recorded in dialect, the most common being broad Aberdeenshire and Glasgow.  The speech used by Willie Kemp, George Morris, Dufton Scott, Bob Smith and others is very difficult for a non-Scot to understand.  These records seem to have preserved for posterity patterns of speech and vocabulary that have all but disappeared.  Beltona even produced some Gaelic language leaflets advertising their catalogue of Gaelic recordings, the only company, as far as is known, to do this until the advent of Gaelfonn records in the late 1950s.

The post 1939-46 War period produced many new artists, only Jim Cameron and Ian Powrie survived from the old days.  A similar situation pertained at Parlophone Records, Beltona's main competitor, who only retained William Hannah from the pre-war period.  Cameron went on to be the best selling post war artist and sales of Scottish dance music by his band were the main competitors to Jimmy Shand. 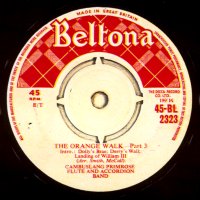 Shand had had considerable success with his records for Beltona for whom he recorded from 1935 until 1945 but this was totally eclipsed by his subsequent sales for Parlophone.  Until the Beatles released their first records, Shand was their best selling artist!

In the later years of Beltona's life there was less variety in the repertoire recorded the main emphasis being on country dance bands and singers of favourite Scots songs.  The company turned more to recordings of Irish material, an area in which they had considerable success with singers like Bridie Gallagher.  They also dabbled with jazz, skiffle and rock 'n' roll, but only in a very half-hearted way.  Beltona did enter the vinyl field and issued over 250 LPs and 100 EPs, some of which were re-issues of earlier material.  Their last single was issued in May 1974 and the final deletion of the last vinyl item took place in late 1982.  Thus ended 60 years of existence during which time they had seen the demise of hundreds of different labels. 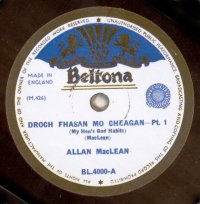 Apart from the Scots material they also issued interesting material from the Orange and Irish Republican tradition, one record of Lithuanian comic songs, two by a Jewish cantor and the only record of The Red Flag and The International obtainable over the counter and advertised in a readily available record catalogue.

During its life, Beltona provided a wide variety of material for its chosen market; it had a 'down home' approach to marketing that differed from the more upmarket one adopted by many of its competitors.  It had no delusions of grandeur; there is no evidence that any record was made for purely aesthetic reasons.  Profit was what motivated all their actions.  What enabled them to outlast scores of competitors was that they were able to identify what their Scottish customers wanted and to cope with changing shifts in demand.  They perhaps could be given the credit for recording a wide variety of ethnocentric music that had, hitherto, been neglected.  Even Parlophone, their major competitor (and imitator), with all its massive resources and distribution network was never able to match Beltona's success.