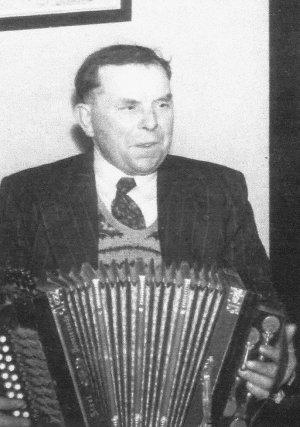 the life and times of a north Norfolk melodeon player

Melodeon player Herbert Mallett, who lived for much of his life in the north Norfolk village of Aldborough, was in many respects the archetypal traditional musician; a village performer who played for his community.  His noted and recorded repertoire comprises various jigs for social dancing, such as The Long Dance, and the ubiquitous Yarmouth Hornpipe to accompany step dancing.

He was born in Thurgarton on 29th March, 1889, and is listed in the 1901 census as 'scholar', aged 12.  He was one of eleven children and his older brother Albert, also a melodeon player, was born c1885, and is described in the same census as 'woodcutter', aged 16.  Herbert Mallett's niece June Sewell-Cooper remembers that his mother used to play the melodeon: "I had learnt that she used to have a little go," but it is unclear whether it was she who taught Herbert and Albert to play.

Both brothers played regularly around the area, not necessarily together, as Philip Knowles, Albert's grandson, recalls that there was a certain amount of rivalry between the two brothers, although they do seem to have played as part of a trio as a dance band for a while.  A family story recounts that Albert Mallett would return from the pub after a night's drinking and playing, in a horse and cart, with the instruments in the back of the cart, the horse managing to find its own way home.

Herbert Mallett was a gardener during his working life.  June Sewell-Cooper remembers that "I know at his home he had an old-fashioned organ, and what fascinated me was that he used to pull the stops out, and when you pressed the keys that made different noises," although whether he played the organ in any capacity outside of home is unknown. 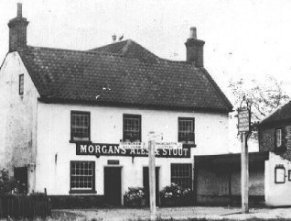 Aldborough has two pubs, The Black Boys and The Red Lion, and both seem to have been lively places for music, in which the Mallett brothers took part.  The village was particularly busy during the annual fair in June, held on 21st and 22nd of that month.  The first day was given over to the selling of livestock, "the second day of the Fair was the pleasure day.  There was plenty to eat, and all cheap enough - great hams that you could slice off with a hunk of bread for three pence; roast potatoes; cakes and pastries; sweets and biscuits.  There were steam horses and boxing booths and an entertainment enclosure where there was singing and country dancing and step dancing in clogs, and the music was provided by violins from Norwich."

1  An upstairs room at The Black Boys became a lively venue for music and step dancing.  Norris Winstone recalls that the step dancers performed on a one-foot square board which had been "lubricated with beer and dusted with sand."

Herbert also played for country dances in a venue known as "The Hut" on Aldborough Green, playing as part of a band, as recalled by June Sewell-Cooper: "In the year that they started, which was 1942, I was only nine years old, but I can remember going to them as a young girl, and they carried on.  That was a lovely little dance hall and I can remember him playing there.  It must have carried on after the war, for me to remember.  We lived in Norwich, so it was only weekends when I went up there, with my mum.  I think there was only three of them (musicians); there might've been four.  I suppose there was what you call the dances of the day, in that era, but there were always folk type of dancing.  I do believe you could talk about the Boston Two-Step, Veleta dance and those sort of things; Palais Glide." 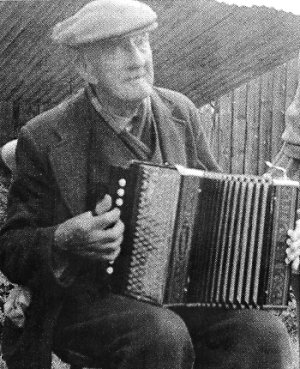 Another melodeon player from Aldborough, who seems to have played mainly in The Red Lion was Albert Temple (born c1873), known as "Giddybar", a carpenter who mainly lived in a caravan on the village green, as recalled by Cyril Bacon: "Well, he used to go in the pub with that (his melodeon) o'nights, that's how he got his beer; he would lay his hat on the floor, and play a tune, and they'd chuck the pennies in, or whatever; wasn't much; until he got enough for a pint; Red Lion, I never did see him in The Black Boys, never."

In neighbouring Thurgarton The Bull pub was also a lively one for music.  Mr Davey, whose family kept the pub in the 1930s and throughout the war years, recalls the step dancing: "The old bar place; the floor was covered with rather large flagstones, and two of them would be dancing, and they'd pass each other in the middle, and there'd be sparks coming off their hobnailed boots, off these hard floor flags.  One, who used to come from Sustead, he was called "Corns".  Another one was Davy Turner.  And one or two others would attempt to take part, but they were the chief stars." Another Mallett - seemingly no direct relation - provided the music on occasion: "Ollie Mallett, from Hanworth common (born c1886).  He had one or two special tunes which he played for the dancing.  I remember one was called Donkeys on the Beach.  I think that was one of his own homemade ones.  I'd never heard it before and I don't think anyone else knew it, apart from when he played it."

This music making continued throughout the war, despite the shortage of the vital ingredient: "Beer was sort of rationed there; we never did get enough to last the week, while all the army and air force and so on was around.  And they used to open perhaps at 8 o'clock instead of 6, and the regulars would creep round in the back door, and come in that way, so they could get an extra pint or two."

As well as the regular melodeon players, Mr Davey recalls the inventive ideas amongst the locals, used to join in the music-making, and perhaps gain a free pint or two: "Another one from Sustead.  He'd got a homemade thing made out of a garden sieve, with the lids of boot polish attached.  He would manage to shake that as well as play the accordion.  There was another chap; I try now to remember where he came from; he would bring a trumpet.  I don't think he ever blew more than two notes.  He always had it with him, and went through the motions he was about to play; but he never did.  And someone would treat him to another pint; try to get him in the mood, but that never did come off.  And he would come now and again, for months perhaps, but we never did get a proper recital.  I remember now somebody who was called "Sparks" and he was a chauffeur for somebody quite well off in the Sustead area; can't remember who that was now.  But when we had the entertainment with the accordions and so on, he had a piece of old car back axle on a piece of string, and he used to strike that and that sounded like a triangle.  He used to join in with that."

Mr Davey also remembers a dulcimer player from Wickmere who would turn up at the pub on occasion: "I believe his name was Simons.  He didn't turn up very often.  But I know he made this thing, and played it occasionally."

Herbert Mallett was a regular musician in all these places in his community, but he began to come to wider attention when visited by Joan Roe in August, 1935.  She was a Norwich piano teacher, country dance enthusiast and stalwart of the English Folk Dance and Song Society.  She seems to have been helped in this by a Mrs Gay, herself a keen dancer, who acted as chauffeur and also noted down tunes from traditional musicians.  Mrs Gay had noted down tunes from a Mr Newstead of Wickmere in 1932, a version of Starry Night for a Ramble and a Long Dance tune which is essentially Garyowen.  Herbert Mallett was Mrs Gay's gardener in the 1930s, and one story claims that he was only allowed to play when she permitted it.

4  Whatever the truth of that, Mrs Gay seems to have introduced Herbert Mallett to Joan Roe, who noted down five jigs from him in 1935: Haste to the Wedding, The Perfect Cure, Lass o'Dallogill, a loose variant of Trip to the Cottage and one untitled tune which is perhaps really a schottische.  In a talk given in 1938, she describes the meeting thus: "In August 1935, thanks to Mrs Gay once more, I was able to hear a feast of tunes, played by Mallett of Aldborough, who used to hear them from his uncle who lived at Gresham."

5  According to her manuscripts, the tunes were noted down in the neighbouring village of Wickmere.  The Perfect Cure was published in the English Folk Dance and Song Coronation book

6, and has become pretty much the standard version of the tune. 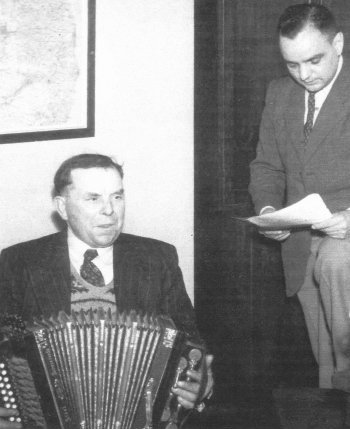 Haste to the Wedding and The Perfect Cure are common enough in East Anglia, the latter especially so.  However, Lass o'Dallogill is certainly not a common tune in the area, being associated with the North Skelton sword dance in Yorkshire.  Where Herbert Mallett might have got it from is unknown.  Unfortunately Joan Roe seems to have noted no more tunes from him than the five in 1935.

In about 1950, Herbert Mallett was invited to the BBC studios in Norwich to play some of his tunes.  The circumstances of this are unfortunately not known, June Sewell-Cooper only being able to recall that "I get that feeling that after he'd been down there, there was a bit of a disappointment because he didn't quite achieve what he went down there for." Be that as it may, the extant recordings consist of him playing very sprightly versions of three tunes: The Perfect Cure, Yarmouth Hornpipe and Haste to the Wedding.  He rattles through the two jigs at a fair speed and his Yarmouth Hornpipe is an unusual version, particularly in the B music, which he plays only once through each time, a common trait amongst East Anglian musicians playing for step dancing.

Herbert Mallett continued to play for social dancing, often accompanied by his daughter Connie, also playing accordion, and sometimes another Aldborough resident, Joan Tash, whose parents kept the village shop.  He died in 1963.  Of the pubs mentioned, Thurgarton Bull closed on 13.06.1957

8, although both Aldborough public houses have remained open to this day, sadly they no longer host evenings of traditional music making.

2.  Another north Norfolk melodeon player, Percy Brown, was a regular in the function room at Aldborough Black Boys.  See article MT211: Percy Brown: Aylsham Melodeon Player for more information about him and Aldborough Fair, together with a photograph of him playing with Jimmy Martins in the venue.

3.  Quoted in A Century of Faces and Places: A History of Aldborough and Thurgarton 1900-2000 by Keith Entwhistle (2002), from which the photograph of Giddybar comes as well.

4.  See the notes in Hawk and Harnser: A Compilation of Norfolk Dance Tunes by Alan Helsdon (Quanting Publications, 2004).  This also prints two of Herbert Mallett's tunes and has more information about Joan Roe.

5.  The talk was reconstructed by Alan Helsdon for Wymondham Music Festival in June, 2005, with myself playing the tunes.

7.  See article MT251: Name that Tune: Waifs and Strays of English Melody by Phil Heath-Coleman for more information about the tune.

8.  Information from www.norfolkpubs.co.uk, from where also came the photograph of Aldborough Black Boys.