I'm sorry to have tp tell you that on Sunday 30th January 2022, mid-afternoon, one of our best and oldest friends finally got a break from years of pain and ill-health.  She died in hospital, shortly after being visited by her family.  I suppose I'll have to face up to putting together an obituary, but can't face it fror a while yet.

I would say, however, that in my opinion, she was the finest English female singer of traditional songs of her generation that I ever had the pleasure of knowing.  Also a supremely kind and warm human being.  Our thoughts go out to Matin, Eliza, Tim and and all the family.

I've just had what turns out to be a really interesting email - even though I didn't think it would be at first glance of the message.  But the website itself is just fascinating - do give it a look.

Here's what Billy Bragg has to say about it:

"A new website went live last week, a massive project investigating the history and politics of English protest music from 1600 to 2020.  Based at the University of East Anglia, the project has compiled a database of 750 songs of which 250 are showcased as the most distinctive and important.

They came to speak with me while I was on my recent UK tour and the interview is available to hear on the website.  It's a brilliant resource for anybody interested in how song was used to register protest through the ages and a wealth of material for anyone inspired by this tradition."

Besides the songs in a searchable database, we also feature interviews, case studies, guest blogs, and an extensive bibliography.

We'd really appreciate a mention in your news or editorial sections.  Thanks so much, and best wishes,

Further to my review of the excellent A Secret Stream book, Nick Dow had kindly sent me a ZIP file of the 126 sound files, which reproduce all the tunes of the songs and fiddle tunes covered in this book.  It unzips into 73 files for the songs in the main part of the book, plus separate folders for the Carols, Fiddle Tunes and Anglo-Romani songs.  That makes it quite big - 74,843Kb - so it will take a while to download.  But, from what I've heard so far, it will be well worth it - Ed.  Download it HERE

The judges expressed their appreciation of the continued high standard of our productions, but we didn't win it for a third time!

The Stroud Singing Session is now back up and running - but on a different day.  Now First and Third Tuesdays of the month, 8:00 onwards, The Little Vic at The Queen Victoria, Gloucester Street, Stroud.

For some reason, I can't get my mass-mailout system working at the moment - so this is to inform you of a new release. 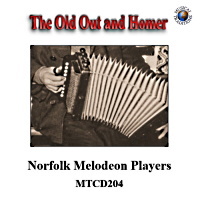 You can get to it on the MT Records website HERE.

The Old Out and Homer

I'm very pleased to pass on something I've just heard from John:

I've been writing and talking about Irish songs for over fifty years.  For some of those, friends have been suggesting I gather my published work together.  I'm afraid these suggestions have now been acted upon.  Under pandemical pressure, I've constructed a website "John Moulden On Irish Songs" with the address https://johnmouldenonirishsongs.wordpress.com/.  At present it has some introductory items built into a structure which, I hope, can be easily followed.  Eventually, a few items each month, it is intended to hold house all my papers and a good number of presentations.  Essentially, it's to be quarried, according to each user's interest and inclination, though it would be best to start at Home and follow suggestions.  Feedback will be welcomed; my full arguments will only become clear when it's all been posted.

A quick browse has shown it to already be very interesting, and John's plans indicate that it will become exceptionally so as time goes by. 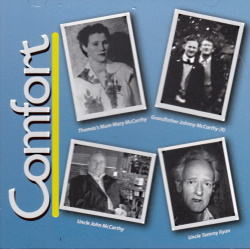 Wonderful to have these ten new recordings on Comfort by Irish Traveller Thomas McCarthy.  Only a few of these (Green Brooms, Lord Lovett/Lovel, plus Month of Spring - a version of Sailing's a Weary Life - on companion CD Last Man Standing) are commonly sung.  Most are songs particular to Thomas' family branch of the Irish Travelling community, several being written by family members over several generations. Family photographs adorn the front cover.

Thomas is very aware of the importance of sharing these rare songs more widely before the tradition is lost.  This concern was shared by recorder /producer Brian Despard who secured a grant from the Heritage Lottery Foundation to extensively record Thomas McCarthy and produce Comfort for sale, plus a companion CD Last Man Standing (entitled as he perceives himself) to be distributed free of charge to schools, libraries, community centres etc.- not easy in these lockdown days.

There are 20 tracks on LMS (8 repeated from Comfort), all unaccompanied.  The notes are in Thomas' own words, unmoderated, (one might say unencumbered) by Child or Roud numbers.  They give a tantalising glimpse into his family background and rich cultural history.  £12 plus £1.65 p&p (UK).  Available from me, Peta Webb. 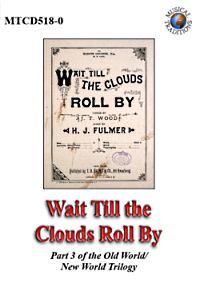 As promised, part 3 of the Old World/New Word Trilogy is now available.  It is a 3-CD Set containing 79 tracks, of 222 minutes duration, plus a 52 page integral booklet in DVD case.

There are commercial recordings of American songs that have made it back to the Old World via 78rpm discs and/or printed music, together with how they sounded when taken up by the British oral tradition.  Quite a few of the songs here you probably never knew were American, nor could imagine what the 'original' sounded like.

As usual, it's available from the MT Records' website, priced just £20.00

All our nights are now held in the Calthorpe Arms, 252 Gray's Inn Road, WC1X 8JR (on the corner of Wren Street; 020 7278 4732).  King's Cross, Russell Square and Chancery Lane tube stations are about 10 minutes walk away, and various buses go down (and up) Gray's Inn Road.   For information, call 020 7281 7700, sheilamiller55@yahoo.co.uk or cellarupstairs@aol.com Information: 020 7281 7700, sheilamiller55@yahoo.co.uk or www.cellarupstairs.org.uk
Entrance: Members: £6, non-members: £8, except on nights marked *, when it will be £7 and £9.
Membership: £4 for the year
Resident Performers: Gail Williams and Jim Younger, Peta Webb and Ken Hall, Sue Williams & Frankie Cleeve, Bob Wakeling, Katrina Rublowska.

Songs of the North Riding (MTCD406-7).  This release will make generally available a large number of recordings which were previously scarcely known about.  Of the 22 singers to be heard here, only Arthur Wood and Billy Pennock's names are likely to be remotely familiar.

In 1962 Colin S Wharton published his Leeds University degree thesis 'Folk Songs from the North Riding'.  This thesis was the culmination of his collecting in the North Riding of Yorkshire.  The finished work was 149 pages long and divided into five sections, according to subject matter: Songs of Love and Courtship, Songs from the Farm, Hunting Songs, Occasional Songs, and Songs of Sorrow.  This release contains almost all the recordings he made.

It's one of our rare '400 Series' releases (like the Pop Maynard and Martin Carthy ones - the latter being no longer available) with 2 CDs in a double jewel case, and fairly brief notes.

Among the purchasers of our most recent CD release, Freda Palmer: Leafield Lass (MTCD375-6), was Tom Pettitt, Affiliate Research Professor at the Centre for Medieval Literature and Cultural Studies Institute at the University of Southern Denmark.  Tom has alerted me to something which really ought to have been commented upon in the booklet notes; that the song Maria Marten (Roud 18814) is not the one normally known by this name.  Indeed, there have been at least nine broadside ballads dealing with the murder of Maria Marten, although only two appear to have made it into the oral tradition.  The 'usual' one (Roud 215), titled The Murder of Maria Marten, which usually has the first line: "Come all you thoughtless young men", was published by many of the main broadside printers and was collected extensively from performance tradition in England in course of the 20th century.  Indeed, it was long thought that it was only this version that had passed into oral tradition.

However, another song on the same subject was collected by George Gardiner from George Digweed, of Micheldever, Hampshire, in 1906.  Subsequently it was found in the repertoire of both Sally Sloane, of Lithgow, New South Wales, and the Bobbin family, also of New South Wales.  Subsequent to that, Mike Yates recorded it from Freda Palmer in 1972.  It appears that this song was titled The Suffolk Tragedy, or the Red Barn Murder in its broadside printing, with a first line: "Young lovers all I pray draw near and listen unto me".

Tom Pettitt has very kindly created a special composite document for publication as MT Article 316, of which he writes:

This document and my 'discursive' bibliographies on other murdered sweetheart ballads are available on academia.edu, but access seems increasingly complex, and the fact that there is more than one broadside ballad about Maria Marten seems not to have gained much of a foothold in discussion.  I am accordingly grateful to Musical Traditions for facilitating this supplementary mediation.  The exercise has also resulted in some updating of the material and the mending of broken links.

I would suggest that this article, together with the links to other works found within it, should tell you pretty-much all you might ever need to know about Maria Marten and her place among the 'murdered sweetheart' ballads.  Had I read this first, I wouldn't have written notes about the wrong song in the booklet!

New versions of web browsers will soon start requiring HTTPS, a secure version of the commonly used HTTP protocol, for websites you visit.  You may see a notification like this (right) when you try to visit a site that doesn't use HTTPS.

As with most new things, getting an HTTPS certificate will have a cost - in the case of Musical Traditions Magazine and MT Records, the cost would be £160 in the first year, rising to £320 in the second and subsequent years.  Added to that, there would be many hours of re-writing our web pages, and problems for users if I didn't get it perfectly right the first time.

And what benefit would you, as an MT reader, gain?  Absolutely nothing, because nothing in the magazine is ineractive, requiring any of your personal details.  Purchasers of MT Records' CDs or Downloads also gain nothing because all the financial transactions are dealt with by PayPal - which is a secure HTTPS service.

So - I will not be converting either the Magazine or the Records website to HTTPS because there is nothing here which is insecure.  You can click the 'Not Secure' button if/when you see one, without any concern.