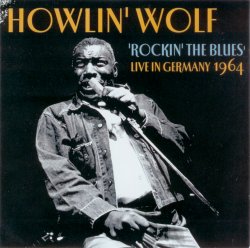 Although he had been performing his own brand of downhome blues for over 30 years, starting off as a Charlie Patton imitator and ending as the ultimate voice of Chicago's South Side, Howlin' Wolf's name was not a familiar one in Europe in the mid sixties.  Better known as an influence on considerably lesser talents, the Wolf largely remained a mystery beyond Delta fish fries, Memphis recording studios and seedy Windy City clubs.  So his audience in Bremen, West Germany, on November 1964, most of whom would only have heard of him as the originator of the Stones' hit Little Red Rooster or for his minor Top 40 hit Smokestack Lightnin, were hardly prepared to witness a bluesman at his peak, in total command of his material and supported by some of the finest back-up musicians to visit the continent.

Although the sound quality is understandably not great, sounding as if recorded in row 38, it does little to impair the majesty and power of such a unique performer whose very physical presence would have been enough to terrify the more timid listener.  And bear in mind that he had been asked to tone his act down for European consumption!

Most of the numbers here will be familiar to fans of the Wolf's Sixties' output, only Dust my Broom, a tribute to his great friend Elmore James, and I Didn't Mean to Hurt your Feelings, with fine piano work from Sunnyland, not being recorded commercially.  Most are mid-tempo rockers guaranteed to fill a dance floor, but tedium is avoided by the slow, tortuous version of St Louis Jimmy's Going Down Slow with biting guitar from the great Hubert Sumlin (?) and the frenetic stand out track Howlin' for my Darling.

This is classic blues indeed, a master at work performing a set of familiar tunes with his regular support band to a receptive, if decidedly polite, audience.  Whatever the good people of Bremen made of it all I do not know, but I thoroughly enjoyed the set and it comes highly recommended. 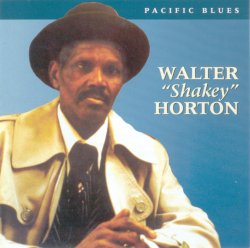 In stark contrast, Pacific Blues offers us eight tracks from a gig at the Union Bar in Minneapolis, recorded live in January 1979.  Now there is no question that Shakey Horton was a paramount bluesman, far superior in harmonica technique to, say, Howlin' Wolf, and with a recording pedigree, albeit primarily as an accompanist, the envy of anyone.  However, the drawback here is the length of the individual tunes.  On any recording, if you cannot get your message, often a very limited theme, across in three minutes then there is something seriously wrong.  Most blues have a distinctly sparse story to tell that neither requires nor benefits from lengthy exposure, while with instrumentals the problem is made even worse.  It should be noted, however, that not all tracks are so blighted, the opener, Union Shuffle, being a bouncy instrumental that clearly demonstrates Horton's impressive technique, while Come on Little Girl with its Howlin' Wolf imitation overcomes this niggle, and a rather top-heavy drummer, to become a fine performance - but nothing that could not have been achieved in half the time.

By the time of these recordings Shakey Horton was an old man with years of scuffling round Chicago's seedy South Side bars and lounges behind him, and it is to his credit that he could still turn in such a display of harmonica pyrotechnics, particularly on the standards Little Boy Blue and Shake Your Moneymaker, but the effect of nine long mid-tempo pieces can be very wearing even if they closely resemble the current practices of today.  Unfortunately for the benefit of MT readers, I cannot take the easy option, pack up and go home, unlike the audience who appear to have done exactly that.

The survival of Delmark Records for fifty years is surely cause enough for celebration, but here the pleasure is doubly enhanced by the release of a series of 'Best of ...'s to mark this triumph.  Founded and still run by Bob Koester, Delmark have consistently released first rate collections, boogie woogie, BeBop and Avant Garde jazz performed by masters of their art for fifty years in the face of changing trends, indifference and commercial pressures.

Here we are treated to ten great tracks compiled from the extensive back catalogue that encompasses South Side Chicago blues from it immediate post war inception through to its most recent releases. 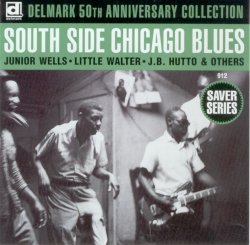 But the emphasis here is the Seventies and Eighties when styles, often fifty years old themselves, are reinvigorated by amplification and contemporary musical stylings.  Nothing new in this - 'twas ever thus and the main reason for the Blues' survival and progression.

Little Walter was easily Muddy Waters' best harp player and here he is given the spotlight on one of those mid-tempo shuffle boogies so beloved of harmonica players to this day, and is a reissue (a practice Delmark infrequently but most successfully indulged in) and comes from the late Forties.

A member of Walter's recording group, The Aces, Robert Jr Lockwood had a love for jazz and was often infuriated by interviewers concentrating on his early years in the Delta, while ignoring his own preferences which are clearly demonstrated on the fine Can't Stand the Pain.  Another artist with a long pedigree, having recorded in the 1940s as 'Doctor Clayton's Buddy', was fellow Mississippian Sunnyland Slim.  A fine pianist with a lazy vocal technique, Slim excels on Smile on My Face with superb guitar back up.

Another of Muddy's recording crew, Junior Wells, clearly shows the influence of Sonny Boy Williamson I (ie.  not Rice Miller) which gives ample evidence for the long success of this well liked harmonica player, while Elmore James is the inspiraiton for the work of J B Hutto whose slashing, hard driving bottleneck guitar work is at the forefront of the long instrumental Slidewinder.  Jimmy Rogers was Muddy's longest serving sidekick and sings I'm in Love with one of those laid back voices so evocative of late nights and sweaty bars.

The tempo is raised a tad for Carey Bell, a master of the chromatic harp on Walking in the Park, but the real stand out track by some distance is the exquisite doom laden All Over Again by his son Lurrie Bell, a B B King-inspired offering.  A man who has gone through more than his share of personal difficulties, Lurrie's offering, backed by a superb organist, Ken Saydak, and guitarist, is a masterful example of the route the music was to take and a classic example of its current state.

But its back to basics with Cried Like a Baby Child, a hard driving blues from the less well-known Byther Smith.  Chicago has a seemingly endless capacity to throw up such artists and Smith is certainly one I will investigate further on the evidence here.  Finally, Chicago's long tradition of women singers is sampled here by Big Time Sarah on the gospel warhorse Train I Ride suitably updated to fit in with the company, and accompanied by some inspired guitar and organ work.

Chicago is a magnificent city, full of variety and contrast and easily my favourite in America, and we are indeed fortunate that its generosity extends to these three fine, if not faultless, CDs.