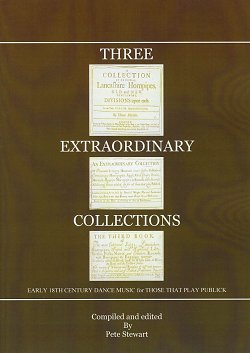 At last, all the music from these three unique publications in one fully-annotated edition.  Includes concordances and transpositions for fixed-key instruments, plus an appendix on the hornpipe in the 16th and 17th centuries.  A4 perfect bound; 120 pages; B&W Illustrations.

This is a real treat for all instrumentalists interested in British music: three extraordinary collections (as it says on the cover!) of fiddle music of the late 17th/early 18th century. The originals were down to one complete copy apiece in the British Museum, so we are very lucky they still exist, and very lucky too that Pete Stewart has republished them.

A good way to get a flavour of what we are getting here is to have a look at the original descriptions.  Thomas Marsden's collection, 1705, is described as 'A Collection of original Lancashire Hornpipes, Old and New, containing Divisions upon each'.  Next up, published by Daniel Wright in 1713, is 'An Extraordinary Collection of Pleasant and Merry Humour's, never before published, Containing Hornpipe's, Jigg's, North Cuntry Frisks, Morris's, Bagpipe Hornpipe's &Round's, with Severall Additional fancis added, fit for all those that play Publick.'  Lastly, from c.1730 (not sure how accurate this guess is) we get John Walsh's collection, 'The Third Book of The most Celebrated Jiggs, Lancashire Hornpipes, Scotch and Highland Lilts, Northern Frisks, Morris's and Cheshire Rounds, with Hornpipes the Bagpipe manner.  To which is added the Black Joak, the White Joak, the Brown the Red and the Yellow Joaks. With variety of Whims and Fancies of diff'rent humour.'  Can you resist rushing out and buying a copy straight away?

Pete Stewart knows his stuff admirably, so we don't just get the welcome reprint of the tunes, but a great deal of historical and music commentary and explanation.  His Appendix on 'The Triple-Time Hornpipe' for example is a gem, and contains material and arguments I am sure you will not have come across before.  The old 3/2 and 9/4 hornpipes form the linking theme of all three collections, and as their history is largely lost in the mists of time a lot of what Stewart says is conjectural, but I'm sure his guesses stand a good chance of being better than anybody else's, it is a subject he has obviously thought long and hard about.  I am not quite sure about some of his imaginings about the changes of tunes from 6/4 and 9/4 time to 3/2, but I suggest you read it yourself and make up your own minds.  Just to show I've read the book thoroughly, I'll pick him up on one point: he quotes the Lancashire 17th diarist William Blundell as saying:

'The Lads of Latham then did dance
Their Lord Strange hornpipe'.

Stewart then goes on to say: 'This…tune must be the Lord Strange's Galliard that appears in two different versions in lute-books from the 1590's'.  Well, on this point I'll definitely have to differ with Stewart.  I am quite sure that the most likely tune that Blundell is referring to is the Lord Strange Hornpipe itself, which is the alternative name for the second tune in this book, Marsden's Old Lancashire or Lon Sclater Hornpipe. By the way, the 'Lon Sclater' is, I am sure, a Londoner's misreading of the word Lonsdale or Lonsdaler.  For those who wish to know more background to all this, I would recommend a read of the diaries of William Blundell's son Nicholas as well.  He is a fund of information on Lancashire piping, Cotswold morris dancing and much else beside of the second half of the 17th century.

The material in this book, as you can see from the titles of the collections, is of a predominantly northern English flavour, and the editor discusses the origins and styles of the pieces.  Marsden's collection of Lancashire hornpipes has some real meat, some absolute gems of this quite archaic music, rather barbarous and uncouth to some antiseptic modern ears.  His prolific strings of variations, it has to be said, may in some cases seem pedestrian to current tastes, though it may a case of "it's how you play'em".  I would think something along the lines of Kurdish or Turkish music, rather than Scan Tester, might be a good approach! I have tried myself to record Marsden tunes, variations and all, with varying success.  George King's Hornpipe, for example, has a very good set, but I have to say I doubt if Marsden wrote those, I think he got them from elsewhere.  Of Marsden, himself as far as I am aware, we currently know nothing, except what we can deduce from his book.  He has a suitably northern name, but whether he was a northern musician who knew his stuff, or just a London publisher who'd spotted a trend we just don't know.  Anyway, in general I am sure the musicians in those days made their own variations, as in jazz, and probably we should do likewise.  If that is your interest, Marsden's tunes are an ideal start.  Virtually all (I think) have only two chords implied in the harmony, and each variation follows the same harmonic pattern.  This subject, and many others, is gone into in admirable depth in Stewart's notes, though I have to say that in this particular case the decision to follow Matt Seattle's rather simplistic notation of harmonic structures is not always helpful.

The Daniel Wright collection is great.  As a sample, try Wright's Whim or Yellow Stockings (though watch out for musical errors, the proof reading in 1713 may not have been that hot.  The punctuation wouldn't always have pleased Lynne Truss either).  Wright seems to have had a fine array of informants, with their ears open on the streets, and published wonderful tunes, in this collection and in his many other books.  He was, for example, one of the very first people to publish Carolan tunes, and was an early exponent of the concept of 'Celtic' music (though, luckily, the word was not in use in that sense then): his 'Aria di Camera' is a lovely themed collection of Irish, Scottish and Welsh tunes.  His 'First and Second Division Violin' also contains many gems.  I mention these in passing in the hope that Pete Stewart might turn his editorial skills in their direction next.  An easily accessible collection of all the traditional material from the British Isles published by Daniel Wright would, I am sure, radically change many people's whole view of our musical heritage.

The third book, Walsh's, contains a fabulous mix of popular tunes of the day.  A lot of northern and observably 'folky' stuff is mixed in with an additional smattering of the musically educated, highly professional John Ravenscroft's fashionable London fiddle tunes.  These are probably of less interest to those mainly interested in traditional dance music; they seem to me a slightly uncomfortable mix of art and folk, and are I suspect less likely to get played nowadays than some of the other stuff.  This collection is slightly later (1730?) than the others, and we see some 'modern' influences creeping in, tunes perhaps more accessible to ears attuned to what we think of as standard English traditional material; huge changes in fiddle music happened between 1700 and 1750.  Some of the new style hornpipes, such as we know today, are coming down from the north, like Peg Huglestone's, an early example of the common time (4/4) style of tune.  And we also get Salt Fish and Dumplings, the widely popular fully-fledged modern hornpipe, with its rather odd title.  There is food for thought, and more research, in the juxtaposition of this rather Caribbean (in the culinary sense) title with an early example of a standard traditional English type of tune.  This, coupled with an advertisement quoted for the entertainment at Bartholomew Fair for 'a black that dances the Cheshire Rounds to the admiration of all spectators' opens up intriguing thoughts about multi-cultural influence on English music and dance.  Was the change that happened to English music at this period perhaps a 'sea change'?  Discuss!  Our thoughts may also swerve in a completely opposite direction when we find, as Stewart points out, that the tune is also known as The Marquis of Queensbury's Scots Measure.  Nailing jelly to a wall is I am sure infinitely easier than untangling the influences that have created English music, or any other aspects of her culture.  We can, however, be absolutely sure that the history of the old triple-time hornpipes, and the new 4/4 ones, is of huge interest, and that the tunes in this book along with Pete Stewart's commentaries, will give you a good grounding in the subject.

A few minor criticisms: Stewart has a bit of trouble explaining the problems of the early notation for retuning the fiddle (scordatura): I think he might have been better advised to have published the tunes as they should sound, rather than as they are to be read.  If he wants, and I think he does, to keep the tunes in the main part of the book as close to the originals as possible, he would have done better to put versions of all the scordatura tunes in the 'Transpositions section', notated exactly as they should sound.  'Play as written', which is roughly (but not exactly) what you have to with the originals of these tunes as published, can be meaningless to the non-fiddler.  Stewart is also inconsistent in the examples he uses, as he corrects some accidentals but not others.

The 'transpositions' section of the book is otherwise invaluable.  Many of the original tunes are in keys inaccessible to the D/G melodeon and the D-whistler, and Stewart has placed in, this section, versions of most of the original tunes that can be conveniently transposed into keys more easily reached.  Of course, some purists will contend that this merely assists the filthy modern melodeon in its destruction of half of England's fiddle repertoire, but you can't always deflect the arrow of progress (??).  How many fiddlers can play in F minor these days, anyway?

I would also have valued a complete tune index either at the beginning or the end of the book, rather than lurking in the middle.  It is there, but you have to look for it; and one thing you really need in a tunebook is an instantly accessible alphabetical list of what it's got in it.

But these are minor points, this is a completely splendid venture, well-researched, well written, well produced, well-illustrated, a plethora of interesting notes, an absolute joy.  I've personally enjoyed these tunes for years, and recorded many of them, having found two of the books in the British Museum, and being sent the third by the great Roderick Cannon back in the '70s.  But now anyone can access them, just buy the book; and please do so quickly.  It might encourage Pete Stewart to publish some more Daniel Wright treats for all our enjoyment; or indeed any other of the fascinating tune books of that era.  Perhaps a ramble through a few manuscripts might excite him?  I do hope this is the first of a long series.