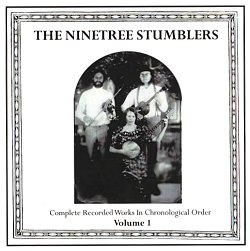 There are many things we value about early recordings of traditional artists, as well as the fact that they offer us music that we might not otherwise have heard.  There are other less tangible aspects, such as the one-take spontaneity that often lends them a very particular kind of energy and presence, or the evidence they offer us of the reality of how people made music at a particular point in history.  Sometimes there are factors that seem to ground them in ways that are increasingly elusive in modern times - a lack of sophistication in execution, for example, and even in some cases an amateurism, that wouldn't get anywhere near a recording studio nowadays.  Even obvious mistakes can seem attractive and charming, and provide an extra charge of authenticity and immediacy - this is real and raw; this actually happened.

On this album, the Ninetree Stumblers - a contemporary group, from the English city of Bristol - give the impression that as well as wanting to play the beautiful old music that was captured on commercial recordings in the 1920s and 1930s, they also want to try to capture some of these more ephemeral aspects.  This impression starts with the cover, a parody of one of Document Records' standard booklet designs, title and all.  The group photos, inside and out of the disc's folder, are set up to resemble the monochrome shots of old-time bands that were taken to adorn the sales catalogues of Okeh, Brunswick, Vocalion and Victor, with band members styled accordingly.  The tracklisting indicates, for each selection, a source recording; these are mostly vintage discs, although a few are from later field sessions.  Source bands include the Red Fox Chasers, Gid Tanner and the Skilletlickers, the Two Poor Boys, the Freeny Harmonizers.

There's no doubt of the love of this music shown by Ruth Gordon, Liam Kirby and Daniel Weltman (playing, variously, guitar, fiddle, mandolin, harmonica, string bass and percussion), who demonstrate not only considerable skill, but also what seems like a fierce determination to do the original material justice.  These performances are bursting with energy, and in many ways it's the same kind of energy that make the originals so appealing.  It isn't slavish copying - the performances aren't note for note images of the source recording (in fact, the vocals are often in an unaltered English accent) - but even so, I occasionally found it difficult to shake off a sense of artifice, even sometimes of parody.  In the medley of Kitty And The Baby and Charleston #2 when they change tunes, there's a moment where everything seems to threaten to tip over into chaos.  This kind of thing happened in some older recordings (or field recordings), but nowadays it can only be a contrivance.  At what point does a passion for something translate into a desire to actually fake it?  Is there a dividing line between close imitation and parody?  Does it matter?  Some old-time bands used to parody themselves, dressing up in hayseed costumes, while some blues singers who normally wore a suit would put on overalls to go on stage.  Traditional musicians in other countries often dress up to perform.  In any case, in the example above, both tunes are performed with a real sense of excitement and with a good dose of that emotional edge that we are attracted to so much in traditional music.

I haven't seen the Ninetree Stumblers live, but I'd guess that their audiences get entertained mightily, as well as hearing some very well-played music they probably won't hear elsewhere, with more than an echo of the real thing about it.  Nowadays, that's a pretty good offer, in my view.