There Was a Fair Maid Dwelling

Double CD, Own label, no number 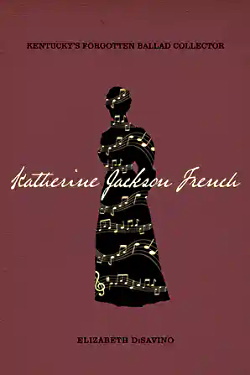 Quote from publisher's website:
The second woman to earn a PhD from Columbia University - and the first from south of the Mason-Dixon Line to do so - Kentucky native Katherine Jackson French broke boundaries.  Her research kick-started a resurgence of Appalachian music that continues to this day, but French's collection of traditional Kentucky ballads, which should have been her crowning scholarly achievement, never saw print.  Academic rivalries, gender prejudice, and broken promises set against a thirty-year feud known as the Ballad Wars denied French her place in history and left the field to northerner Olive Dame Campbell and English folklorist Cecil Sharp, setting Appalachian studies on a foundation marred by stereotypes and misconceptions.

Katherine Jackson French: Kentucky's Forgotten Ballad Collector tells the story of what might have been.  Drawing on never-before-seen artifacts from French's granddaughter, Elizabeth DiSavino reclaims the life and legacy of this pivotal scholar by emphasizing the ways her work shaped and could reshape our conceptions about Appalachia.  In contrast to the collection published by Campbell and Sharp, French's ballads elevate the status of women, give testimony to the complexity of balladry's ethnic roots and influences, and reveal more complex local dialects.  Had French published her work in 1910, stereotypes about Appalachian ignorance, misogyny, and homogeneity may have diminished long ago.  Included in this book is the first-ever publication of Katherine Jackson French's English-Scottish Ballads from the Hills of Kentucky.

This double CD is one third of a potentially interesting and rather strange offering, the other two thirds being a long article by Liza DiSavino on the life and work of Katherine Jackson French, and the publication of her book, English-Scottish Ballads from the Hills of Kentucky.  These two parts are the potentially interesting parts - I've read them as a PDF, and can confirm that they are very interesting, particularly where they deal with Katherine Jackson French as a ballad collector.  This pair of CDs are the rather strange part.

Strange for a number of reasons.  First is what is included.  As one might expect, most of the ballads are quite long, ranging from an 11 minute plus vesion of Lord Bateman to an under 3 minute Three Crows.  But scattered amongst them are several under one minute snippets, which do little to emhance our listening experience, but bring the total duration to just over 80 minutes ... resulting in this being a double CD, rather than a single.

A second strangeness is that most of the tracks are unaccompanied (as they were when they were collected), but some have quite modern-sounding accompaniments by guitar, bass, fiddle, autoharp, dulcimer, banjo, accordion, and cornetto.  This has the effect of making both accompanied and unaccompanied tracks sound odd in relation to each other.

The third strangeness is that Liza DiSavino sings in markedly different styles for each song: as an authentic-sounding traditional Appalachian singer on some of the 'a capella' tracks - Fair Marg'et and Sweet William; a modern country singer on others; and a concert performer of Cecil Sharp's era on others - The Greenwood Side.

So, while these CDs contain wholly traditional material, I find that too much of it sounds inauthentic in performance.

I've been unable to find the price of this 2-CD Set, although it seems to be available as downloads via airplaydirect.com though, again, no prices are displayed.  Parts 2 and 3, the article and book mentioned above, are together published by The University Press of Kentucky, price $50!