Songs of the Sudan

Mustafa al Sunni is an exiled Sudanese musician; an ud (classical Arabic lute) player and singer.  Now based in London, al Sunni was born in Rafa’a, a town on the Blue Nile, 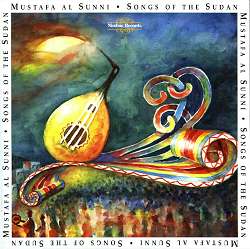 south of the capital Khartoum.  He is accompanied on this debut release by percussionist Abd al Hafiz Karar.

Sudan has been a meeting ground for both Arabic and African musical traditions throughout the centuries, and al Sunni’s native region in particular was the setting for the development of a modern, urban Sudanese style combining many diverse cultural backgrounds.  Unfortunately, religious and political differences, ultimately resulting in civil war, have meant that many musicians have gone into exile.  Al Sunni currently performs to the large numbers of the Sudanese diaspora in the UK and Europe.

My own personal experience of the music of Sudan has been limited to the wild London-based Sudanese community concerts of the likes of big band, urban stylist Abdel Aziz el-Mubarak or Abdel Gadir Salim, with his more rural, raw and African sound.  It is refreshing to now hear a more simple form with al Sunni’s vibrant interplay of ud and voice; his soft and warm vocals flowing over his intricate, melodic instrumental meanderings and occasional rhythmic strumming.  It is only since the turn of the last century that such individual 'performers' established themselves, adopting the ud rather than the indigenous 5-string lyre to accompany the voice.

Lyrics are of paramount importance for the Sudanese audience.  For non-Arabic speaking listeners, a full translated lyric sheet ensures this fundamental poetic aspect of the music is not missed.  However, even without it, the emotion and ambience created by al-Sunni helps to portray the themes of love, loss and longing, which feature so prominently in the urban popular tradition.

Mustafa al Sunni performs from a diverse repertoire of songs; from the hagiba classical tradition, where poets worked with musicians to set words to traditional melodies to turath, folk songs passed down the generations which are associated with the rite of passage ceremonies central to Sudanese life.  Al Sunni himself works with his cousin, the highly respected poet Bashir al Qamar, to create several fine contemporary songs on this release.

Al Sunni's debut is very pleasant indeed, but perhaps it fails to demand your attention (undoubtedly in part due to the non-Arabic speaking factor) in the way that, for example, the raw passion of Abdel Gadir Salim would.  As with the other Nimbus release I have reviewed here, there's a slightly academic tone to this, but that should not detract from the really very fine playing and singing on this CD.