In recent years, CD compilations of ethnic recordings from 78s have been among the most startling and exciting additions to my listening: releases like Rounder's The Music of Arab Americans, Traditional Crossroads' Armenians on 8th Avenue, 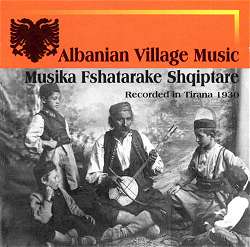 and Aerakis' astonishing 10 CD set of Cretan music, Oi Protomastores 1920-1955.  To that list can now be added this 20 track anthology of music recorded by the Gramophone Company in 1930, for release on Zani I Te Zotit, as His Master's Voice becomes in Albanian.

Not the least remarkable thing is that the recordings should have been made at all.  It's easy now to see that June 1930 was not exactly an economically propitious time to be trying to penetrate any new market, let alone one as poor as Albania, but reading history backwards seldom explains contemporary motivation.  It may be that, as in the early days of recording African-American music, European companies, even in 1930, were still willing to try almost anything in the hope that it would turn a profit.  Even so, A D Lawrence, HMV's travelling engineer, was setting up his equipment in a country which possessed just five retail music shops!  There were and are, of course, large groups of expatriate Albanians in Greece, southern Italy and - as the world of 1999 knows all too well - Kosovo and Macedonia, which at that time were both part of Yugoslavia.  Even taking those possible markets into account, however, this recording expedition must have been a very speculative and marginal investment, and doubtless very small quantities of discs were pressed.  It seems certain that this CD will sell more copies than were achieved by any one of the original releases.

Albanian vocal music is famously transformed as one crosses the River Shkumbin, from the monophonic ballads of the northern Gegs to the polyphony with drone accompaniment of the Tosks and Labs.  It is easy to see this musical division as an outcome and metaphoric expression of Albania's social organisation, itself much influenced by geography.  Albania is bordered externally, and divided internally, by mountain ranges and deep river valleys, and scratching a living from the land has always been a marginal affair at best.  The basic social units have historically been the clan and the extended family ... blood feud, passed down through the generations, remains a potent force.  Albanian villages tend to be built on hill tops for ease of defence, and it's perhaps not surprising that the paranoid isolationism of Enver Hoxha's Communist regime commanded general assent for so long; Albania's view of the outside world was a mirror image of a social system based on fear, suspicion, and a constant readiness to fight.

And yet, isolated and impoverished though Albania is, the country's culture and music have felt the influence of the outside world.  The Albanian language is claimed to be unique, but Benno Häupl, the CD's annotator, estimates that nowadays this is true for only about 20% of the vocabulary, the remainder being of Turkish and Slavic origin.  Albania was part of the Ottoman Empire until 1912, and the population is 65% Muslim; Häupl notes that Albanian music takes in and translates 'Serbian guslar epics, Epirotic dirges, Bulgarian orthodox hymns and Turkish vocal improvisations'.  As A L Lloyd points out in his notes to the famous Folk Music Of Albania anthology (Topic TSCD904), the kaba is Albania's distinctive version of 'a powerful recitative-like instrumental form of vast territorial extent.

Possibly originating in Persia, this kind of melody extends eastward as far as Tibet and Cambodia [and westward to] Albania and Algeria'.  This extract from Vome Kaba features the clarinet of Jonuzi Me Shoket, who appears on five tracks, and is believed to have been a gypsy (sound clip).

Depending on how good your computer's audio capacity is, it may be possible to get an idea, from that and the other sound clips, of how the original recordings were overmodulated at the request of HMV's local distributor, who reckoned that the resultant increased loudness would help sales potential.  I can only say that it works for me.  Another example of influence from outside can be heard in the Turkish-inflected improvisations of Havazi I Dy Motrave (The Melody of the Two Sisters) played on two llaute, eight stringed instruments in double courses.

Probably as a result of recording on one microphone, the tonic drone is often more prominent here than the melodic line, giving an ominous, brooding effect (sound clip).  Elif Allah (Allah is the 'A'), by Nush Bushati and Shoqnija Vjerdha (presumably singer and orchestra respectively) is monophonic,

and hence presumably north Albanian, but it is also located firmly within the wider world of Islamic music, with a vocal line that can fairly be described as Albanian qawwali (sound clip).  Most tracks on this CD have the intensity of that example.  The dissonant polyphonies of Risto Pendavini and Rafail Bulgareci clearly place them in the south of the country, where the subject matter tends to be romantic and lyrical,

in contrast to the epic northern ballads of heroes and brigands; but who, ignorant of the language, would guess that Rezonet Bilbil Nga Mali asks a nightingale to come from the mountain (sound clip)?

Remastered from mint file copies held in the EMI Archive in London, this CD is a glimpse of a musical world whose repertoire and sound seems to come from long before the era of recording, and unaccountably to have survived into it.  One almost feels that the intrepid A D Lawrence was voyaging in time as well as space.  Obviously, the limits of 78 recording mean that what is heard is not a faithful transcription of the live performance practices of the day.  Quite apart from the deliberate overmodulation already referred to, we must be hearing the long songs of the north, in particular, in truncated form.  There were often difficulties, too, in grouping the musicians to obtain a proper sound balance, with the result that some of the singers or instrumentalists sound rather distant.  All that said, this CD still makes for absorbing and compelling listening and, as so often, we can only be grateful for the accidental ethnography of the early commercial recording companies.