Various performers, from the Library of Congress Archive of Folk Culture

This is a re-issue of a record released in 1971 in the series Folk Music of the United States, Recording Laboratory, Library of Congress, with number AFS L62.  It comprises 28 tracks, all single tune sets with one exception, from recordings made in the 1930s and 1940s, mainly from recordings made in the field.  The first thirteen tracks feature fiddlers from the North, Mid-west and West of America, the remainder from the South.  Included are representatives of reels or breakdowns, hornpipes, jigs, a quadrille, schottische, highland fling and quickstep.

The CD comes with a 72 page booklet, again reprinted from the original 1971 release.  This comprises an introduction by Alan Jabbour, followed by notes with each tune giving information on the performer, the recording and the tune itself, including the history of the tune and comments on the techniques and style of the particular renditions. 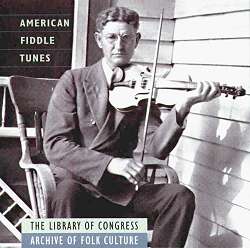 The standard of the notes appears to be informed and informative, tracing the history of the tunes, and often giving a useful short analysis of the style and possible original influences to the styles.  The booklet also contains a number of photographs of the various performers featured on the recording.

The booklet has not been revised for this issue, the rationale being given that the original release has itself acquired historical value as a publication.

As indicated in the booklet’s introduction, the recordings offers a small selection of the older traditional fiddle tunes from various parts of the country and doesn’t attempt to be a comprehensive representation of the 'amazing variety of older traditional styles and repertory'.  It’s aim is rather to serve as a 'useful introduction to traditional [American] fiddling for the scholar, student, or enthusiast whose exposure has been limited to books, commercial recordings, and fiddlers’ conventions, none of which convey adequately what a diligent collector is apt to encounter on visits to the homes of traditional fiddlers'.

In the following I will look at some of the tunes in more detail, whilst not intending to be complete in treating on all the tunes.

The first track is a more or less standard version of Soldier’s Joy, here called French Four after the dance it was usually played for by the performer, Leizime Brusoe.  This track is interesting as it is ‘accompanied’ by Leizime Brusoe beating a rhythmic accompaniment with his feet as he did when he played as a one man orchestra in his early days in Canada.

The next two tunes from the same fiddler are less in what is to-day thought to be an American style, with track 3, a fine schottische, here called Two-Step Schottische but more usually known as the Crystal Schottische, played in more of a Scottish style although it is in fact a tune composed and published in New York in 1853, and track 4, a Highland Fling, again feeling very Scottish.

In fact listening to the tracks I gained a general impression, that, with some exceptions, the tunes collected from the North, Mid-West and West still have more commonality in style with the original British or Irish styles, whilst those from the South have more of the Old-Timey feel that has generally become to be associated with American fiddle music.  It is of course dangerous to generalise from such a small sample, but if nothing else this helps to substantiate the earlier comment in the notes on the variety of older traditional styles.

Tracks 5-7 are performed by Patrick Bonner from Beaver Island - an area apparantly at this time still with strong Irish connections, particular Donegal.  Here the playing, such as on Track 5, Wind that Shook the Barley, again has a particular Irish feel, harking back to the earlier less smooth styles found in recordings of some older Irish fiddlers, again particularly from Donegal.  Here though, and in the other tracks by Bonner, more of what are now thought of as American stylistic playing can be detected as well; but as mentioned in the notes it is difficult to make generalisations about the origin of various styles, especially given what is now more widely known about the styles of Irish playing in the 19th and early 20th century compared to the more widespread fast and fluid style generally found to-day.

Track 6 is a version of the ubiqituous Fisher’s Hornpipe, perhaps played at a speed testing the player’s technique - in the notes there is an interesting discussion on the way hornpipe tunes in America have tended to speed up since the demise of the hornpipe as a popular dance in America, with the tendency having been to bring them into the general breakdown repertoire.  This, and the subsequent challenge to the player’s technique, is also demonstrated in track 20, Rickett’s Hornpipe.

The version of this latter, played by Luther Strong is rather different from the versions known in the English repertoire.  The notes give an interesting history of the tune, and how it came to be known by this particular name, amongst the others it is known by.  Again, there are a number of other tunes on this recording with familiar names attached to unfamiliar (to my ears) versions.

Tracks 9 and 10, played by Mrs Ben Scott on fiddle and Myrtle B Wilkinson on banjo, demonstrate the similarity of repertoire, and to some extent style, with, in this case Scottish origins, although track 9, Haste to the Wedding, makes more use of double stringing than might be found in Scottish versions.  It is interesting to compare this with Track 22, another version of Haste to the Wedding, played by a Mississippi fiddler, Stephen Tucker.  Track 10, Perry’s Victory is a rather fine tune, new to me, played in a similar sawing style.  Both these are lively driving tunes, especially with the fiddle style and the banjo accompaniment.

As mentioned above, whilst the recordings from the North, Mid-West and West show more clearly some of the characteristics of the Old World styles, whilst still having an American style feel to many of them, the recordings from the South generally more a reflection of the accepted American style, starting off with the well-known Bonaparte’s Retreat, Track 14, with a rather fine performance, in which the performer W H Stepp has re-tuned the G string to give a drone D and the E string also tuned down to D.

Track 15, The Drunken Hiccups, again performed by W H Stepp, demonstrates the use of double stopping and is also a showpiece tune with left-hand pizzicato.  To give the exception to my earlier assertion of the Southern selection perhaps being more typically American in feel, this track has strong echoes of Shetland playing.

Track 16, Run Nigger Run and 17, The Ways of the World, again played by W H Stepp are much more in the accepted American reel style, particular with the speed and the tune shapes, whilst Track 19, The Hog-Eyed Man, Track 24, Grub Strings, and Track 25, Old Joe Clark, demonstrate the modality again particular associated with some types of American tunes, particularly from the South.

In summary, this is generally a fine recording and collection of American fiddle tunes, with many interesting and thought-provoking notes.  By the nature of the beast it is perhaps not a recording one would play repeatedly unless one were studying the tunes and/or style, but it does certainly repay some listening.

Whilst acknowledging the reason for not revising the notes, it would have been interesting to have had an update section to the booklet, particularly given the time lapse of nearly 30 years since the original release and the work that has been carried out since into researching older American and Old World fiddle styles and repertoire.