Ballads and Songs of the American Sailor
by Stuart M Frank 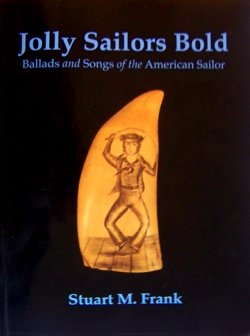 Our legacy of traditional songs comes largely from two sources, printed broadsides, which were at their height in the first half of the 19th century, and the collections of various English and Scottish scholars, starting at the very end of the 19th century.  But there is another source which complements these.  It is American, and confined to the personal journals of whalermen from New England.  I know of no other major resource from the days before the collectors started, which records what working people were singing and thought worthy of writing down.  Gale Huntington's 1964 book Songs the Whalermen Sang presented an interesting sample of these songs, but we now have a much bigger and more detailed book, 30 years in the making, by an author who has spent a lifetime studying the whaling culture of New England.

An impressive-looking A4-size volume with over 400 pages of songs and 100 pages of appendices, references and indices, this has at first sight to be the most impressive book of sea songs ever compiled.  The book's title suggests a wider range than the actuality, for the songs in this book are from just one source, the ship's logs, journals, and copybooks in the Kendall Whaling museum's collection, Sharon, Massachusetts, now incorporated into the New Bedford Whaling Museum.  Although this restricts the scope to whaling ships, the collection has no less than 1100 items, about 20 per cent of the US total.  Ships' logs rarely have songs, so it is the sailors' personal journals that provide these, and they are found in only 88 of the 1100, covering the period 1825 - 95, a total of 452 songs plus 348 variants.

The introduction gives an eloquent description of the lives of these men, and why songs were so important to them.  It is however a little vague on how he has processed the original material into the book, giving us instead a somewhat overblown analogy to archaeology that is meaningless: '…these chards from shipboard manuscripts were identified, classified as to species and type, and, wherever possible, realigned with their original components - their skeletons 'fleshed out' and the missing chards 'filled in', as it were, wherever the texts could be reunited with their original tunes and related to kindred species and types.'  I interpret this to mean the way in which tunes have been chosen for songs which mostly do not come with music.  Care has been taken with regard to this, and many songs have more than one tune suggested.

However, let us see what kind of songs we have after these excavations.  257 out of 454 songs are described by the author as 'parlour songs, music hall pieces, minstrel ditties, sacred hymns, and other 'composed' songs from the Tin Pan Alleys of their days'.  Whilst acknowledging that many of these could be absorbed into the 'shipboard tradition' he says that these are too numerous for inclusion.  He puts 30 of this type, all with a nautical flavour, into Chapter 18, 'Parlour songs' and relegates the rest to an appendix.  However, it is a testament to the quality of this book that even these 'rejects' are each accorded a paragraph of interesting provenance.  Among the remaining 'folk songs and ballads', most were 'broadsides of the industrial revolution', as 'defined in both of Laws' books', so he uses Laws' numbers.  A shame that, unlike most current publications, he does not also include Roud numbers, a subject I shall return to.

Having stripped out the 'parlour songs' then, we are left with 182 songs which Frank regards as 'authentic folk songs', divided into 17 chapters.  No less than six of the chapters are concerned with relationships with women, two have whaling songs, one is a 'tune list', one with 7 shanties, one on sea battles, one on Napoleonic songs, one with detail from the barque Kathleen, and the rest a bit of a mixture.  About a third of these songs are familiar to me, including many classic sea songs like All in the Downs, The Golden Vanity, Spanish Ladies, The Lowlands of Holland, and The Sailor's Alphabet.  For each song we get a detailed analysis of its early provenance and outline of its later one, followed by a selection of appropriate tunes with full 'dots' and sources (I am looking at Lowlands of Holland which has 3 tunes, one from Joyce, one from Bronson, and one from Sharp).  There then follows the texts from all versions of the song (we assume) in the Kendall journals.  Additionally, footnotes explain technical and obscure terms and where appropriate, further history and discussion about a song's origin and development.  With Lowlands this is very extensive, and very interesting.  The 'References' section which comes after Appendix 7, has for each song a selection of other versions of the song, overwhelmingly North American versions.  Whilst he nowhere attempts to include every version, he could have perhaps made clear somewhere the basis for the selection.  Young Edwin in the Lowlands Low, for example.  He acknowledges its widespread occurrence in the British Isles and America, but all the 26 references are North American.  On the other hand, songs of more certain origin like The Golden Vanity, and Spanish Ladies have quite a few English references.

This inconsistency just mentioned is not explained, but is related to a problem with the notes to the songs.  Whilst these are mostly very impressive, there are several examples where claims are made about a song's rarity, its lack of a tune, or its place of origin which have errors.  A couple of examples will suffice: The Wild Rover is assumed to be Irish, which repeats a common myth due to its being recorded by many Irish groups in the last 50 years, when in fact there is no evidence for this, and most versions recovered from oral tradition and in broadsheet form are not Irish; The Milking Maid is said to be extremely rare, mentioning only one American alternative of 1842, when even the alternative title Coming Home from the Wake suggests a very well known song found in many English broadsides and collected by Hammond and Greig Duncan, as well as several North American sources; The Cobbler is said to be the 'long-lost lyrics of an early 17th century song, The Cobbler's Jig, when there is an English version in Hammond and at least one American one in Cox.  A number of such errors have been listed by Steve Gardham on the Ballad-L website, but whilst some of them may be described as 'howlers', most are not in my view that serious, for as mentioned earlier, Frank does not claim to quote every occurrence of a song.  However, they do suggest that the author has not used the many web-based sources now easily available, in particular the Roud database.  Reliance only on the Laws and Child numbers is no longer acceptable, I think.

After the 182 folk songs, we have Chapter 18, with the 30 'nautical' parlour songs referred to earlier.  It has to be said that most of the titles do not attract an interest, and those that do turn out to be disappointing.  Mostly jingoistic, purple prose.  Appendix 1 has half a dozen Charles Dibdin songs.  The introduction to this chapter is fascinating, with the implication that his songs were instrumental in bolstering the morale of Nelson's crews, an idea I had not come across before.

Frank claims that the results 'address the locus of song types and musical entertainments on 19th century American ships and its transmission and documentation.  The majority are familiar though many are sailors' variants.  Some are the earliest version found, or the first American occurrence.  Some have never seen anywhere else.'  He finds 27 of the songs to be in the last category, and I agree apart from a couple.  Most of them are written by the sailor who provided the journal, and as such tell us much about what they preferred, and what they were thinking.  I agree with the author that they are a valuable addition to our knowledge and understanding, but, disappointingly, they are not songs which would inspire me to sing them, including the whaling ones.  (I always thought that all the good whaling songs were recorded by Bert Lloyd and others on the Leviathan LP of the '60s, and the ones seen here have not changed my mind.)

Appendix 6 has prolific, detailed, and fascinating biographies of the sailors who provided the songs.  George W Piper, for instance, of the ship Europa of Edgartown, provided 156 songs, according to Frank by far the largest collections of seaman's mss anywhere.  His voyage in the Edgar lasted six years!  The Marble family of Fall River provided 32 songs.  Two brothers, George and John, married two sisters, and all four of them were together on a whaling voyage in the ship Kathleen in 1857, which altered my view of whaling ships until I found this to be very unusual, and perhaps influenced by the fact that the brothers were captain and first mate of the vessel!  Anyway, we are indebted to Lizzie, one of the wives, for preserving the songs.

My immediate reaction on opening the book was to turn to Gale Huntington's 1964 book Songs the Whalermen Sang.  Didn't that do the same, looking at whalers' journals, from which he extracted 175 songs?  And his sources are more widely ranging than Frank's, including several New England museums in addition to Kendall, such as Mystic, Salem, Dartmouth, New Bedford, Nantucket and Providence, as well as the Dukes County Historical Society.  So, Frank's book has far more songs from just one of Huntington's sources.  And, it turns out that of the 53 of his which appear in Frank only three of these were taken from logs in the Kendall collection.  Most were in fact from one ship, the Cortes, whose journals were in the New Bedford collection.

So, the 452 songs in the new book all come from a source which only provided Huntington with three.  If we look at those in Huntington but not in Frank, there are many fine British folk songs, including The Sheffield Apprentice, The Croppy Boy, Fanny Blair, Reynardine, etc.  Huntington said nothing in his book about the basis for his selection, and Frank hardly mentions Huntington nor says why he only looked at the one collection (though I must admit that widening the field would have meant a team working on the project, so massive in scale would it have been).

The standard of production is very good, with a clear layout and well illustrated, although there are some stray suffix numbers in some texts which are mysterious, and I found it difficult to use one index covering titles, alternative titles, first lines and tunes, not even identified by different fonts.  Some separation would have been welcome.  This book is an extremely valuable addition to our knowledge and the criticisms I have made are more than outweighed by the sheer amount of scholarship, enthusiasm, and interest on display.  It could well act as a stimulus for further investigation of the transmission and evolution of traditional songs.

The book is currently only available from CAMSCO Music (dick@camscomusic.com) in East Windsor, New Jersey, though it may be possible shortly to obtain it in the UK, where, ironically, it is printed.