Many of the same reservations levelled against Volume 1 of this re-issue must, I fear, be reiterated in the case of this present CD.  Only ten tracks - 40 minutes of music, notes unchanged since 1943, virtually no information about the singers ... justified by the following statement:

'The series offers new master tapes from the archival originals, a new package design and some new commentary and illustrations.  But because the original releases have by now acquired a historical value as publications, these reissues for the most part present both the recordings and the commentary as they originally appeared.'

This 'album' was originally released in 1943, a year after Volume 1, and was complied by Benjamin Botkin rather than Alan Lomax.  Mr Botkin seems a less opinionated commentator than Lomax, and his brief notes contain nothing questionable that I've noticed. 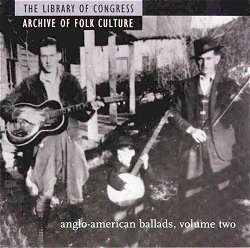 Moreover, we are spared a repetition of Wayne D Shirley's irritating Introduction in this booklet.

The songs and singers are all good ... one might say that this is a far more evenly balanced selection than Volume 1 - missing some of the stand-out performances and, happily, some of the weaker ones, too.  Justus Begley, from Hazard, Kentucky, starts with The Golden Willow Tree (Golden Vanity) and The Rambling Boy - a 'Rake's Farewell' ballad.

Both are self-accompanied on a loud and fast banjo which add nothing to the performances for this listener - a pity, because the former is a great version of the song with a full text and an interesting and unusual tune (sound clip).

Texas Gladden follows with The Two Brothers and The Four Marys - and little needs to be said about the quality of these two songs, or of the singer.  Similarly, Horton Barker sings The Two Sisters and Lord Thomas and Fair Ellender, and one could ask for little more from a ballad or a singer than is presented here.  Unusually, the 'NoNoise' sound restoration wasn't able to do much about the poor quality of the original medium or recording technique on Fair Ellender.  He is followed by Mrs Lena Bare Turbyfill with Bolakins (pronounced Bo-Laykins) which is a slightly garbled version of Lamkin.

Next is perhaps my favourite track - I G Greer singing The Three Babes (The Wife of Usher's Well), accompanied by his wife on Appalachian dulcimer.

This is very nice indeed - carefully and sensitively sung with the dulcimer never getting in the way of the story despite there being no noticeable rhythmic flexibility (sound clip).  Mr Greer's second song is Sanford Barney, a wholly American ballad taking a mildly humorous approach to hard times in Arkansas.  I don't quite understand the decision to include this song (or the final track which follows it, Hobart Smith's Claude Allen - let alone The Little Brown Bulls and The Sioux Indians on Volume 1), since they are clearly not Anglo-American.  Given that the sleevenotes proudly claim 'over 1.5 million items' and 'more than 50,000 hours of unique field recordings' in the Library of Congress Archive, one would imagine that four more American versions of English ballads could have been found without undue difficulty.

As before, this is a good record which I find it hard to recommend on value-for-money terms.  It is also considerably less stimulating than the previous volume.  I'm beginning to wonder if we weren't all just a little too excited by the news of Rounder's huge CD re-release programme - very few I've heard so far have really been up to expectation.