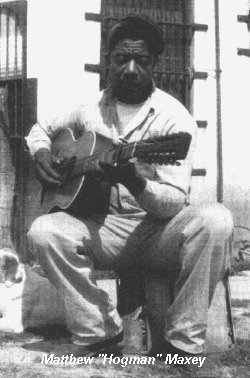 I must confess I hadn't been taking too much notice of Arhoolie's CD revamping of its LP catalogue.  Most of their vinyl issues are mine already and I wouldn't have thought the additional material needed to get the playing time up to CD length would be enough to justify the outlay.  The additional material certainly justifies the outlay for this reissue of 1950's field recordings, made by Harry Oster in Angola Prison, Louisiana.  Of the CDs' 79 minutes, around 50 are made up of items new to commercial release.

What we have here is Angola Prisoner's Blues as it first appeared on Oster's Folk Legacy label, with the original protagonists, Robert Pete Williams, Hogman Maxey and Guitar Welch, but without three tracks which Arhoolie added when they took it over.  These have been transferred to Robert Pete Williams, CD 349.  That original issue is, however, complemented by a wealth of fascinating material and an equally fascinating range of performers.  We now have a much broader picture of the sort of music that would have been heard in a closed institution like Angola.

That picture includes three tracks by what I believe are the only Negro women convicts ever to appear on record.  The paucity of women country blues singers on both commercial and field recordings has long been a puzzle to me.  I can only partially accept Alan Lomax's arguments, that dives and juke joints were unsafe places for women to perform, and that it was men who, taking the brunt of lynch mobs and Klan pogroms, most needed the emotional outlet of the blues.  As the most downtrodden section of a downtrodden race there must have been many occasions when women needed to sing around the house - or around the prison.  Perhaps other collectors simply fell into the trap of looking no farther than the most visible performers.  Whatever, there is a strange and haunting rendering of Soldier's Plea by one Clara Young.  Long, wavering, ornamented melody lines made me think for a moment that I was hearing the female equivalent of a field holler.  In fact the style is rooted more in gospel song than in the kind of prison camp repertory we're used to hearing on record.

Gospel influences had me guessing about another magnificent item, an enthralling performance of Angola Bound, by a collective identified only as an 'A Capella Group'.  That is all we are told about them.  It has been recorded out of doors and with couplets like,

"The boat left Memphis with a hundred men
When she got to the 'Gola, didn't have but ten"

plus a song leader with an appropriate style of delivery - it sounds very like a worksong.  Yet, this is far more polished than any worksong I have ever heard.  With its tight harmony singing it has all the hallmarks of a carefully rehearsed performance.

Time and again, I was struck by how close the singing is to speech, and the ease with which performers move from one to the other.  Listen to the rhythms of Roosevelt Charles' spoken monologue, Strike At Camp 1, and he sounds as though any second he will lapse into song.  Listen too to the talking blues which, in Angola, are more like ordinary conversation than the sort of thing we know from, say, Woody Guthrie.  Even Blind Willie McTell's Travelling Blues sounds declamatory compared to what we have here. 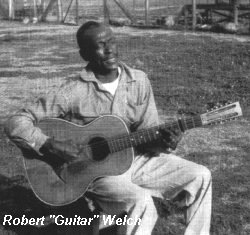 The lion's share of this disc is still with Williams, Maxey and Welch.  I have always enjoyed the brooding melancholy of Maxey's Black Night Falling and the macabre humour of Welch's Electric Chair Blues:

"Wonder why they electrocute a man at the one o' clock hour of night?
The current much stronger, people turn out all the light"

But it is the improvised and the talking blues of men like Roosevelt Charles and Robert Pete Williams which command so much attention.  Charles' contribution is too limited to show his creative powers, but Williams is in full spate.  I am wary of postulated African antecedents, especially when based solely on aural evidence, but I find striking similarities between Williams and his West African griot forebears.  There are other parallels.  Stock verses like "Some got six months", become the launching pad for his own thoughts, and there are long instrumental passages as though he is pausing to think of what will come next.  It is very reminiscent of those Serbian epic singers around whom A B Lord built his theories of formulaic improvisation.  The bluesologist David Evans suggests a link between free creativity and singers, such as penitentiary inmates, who are on the margins of society.  My own feeling is that we have not enough evidence to judge, but perhaps the blues - that most socially alienated of musical forms - finds its freest expression in its most socially alienated performers.

Yet, I'm left wondering.  A broader picture of Negro tradition, certainly, but how accurate is it?.  The question is not an idle one.  The vast bulk of what we know about the blues comes from commercial record companies, and I do not believe these were ever the passive agents of transmission they are usually portrayed.  They were selective over who they recorded and what they put out, they went for the thematic and the non-improvised, and they embraced the creativity of the blues in a three minute format - a straightjacket from which it has never truly escaped.  In short they were part of the process which changed the blues from a folk to a popular music.  So it would have been nice to report on a fountain of pure inspiration, unhindered by any considerations but the musical ideas of its creators. 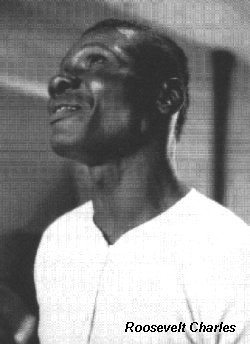 Life is never that simple.  Firstly, Oster is on record as favouring the odd and the unusual and I wonder to what extent this may have affected the selections here.  Secondly, a large portion of these tracks show the influence of commercial recordings.  Even Roosevelt Charles, a creative improviser if ever there was one, comes up with a version of See That My Grave Is Kept Clean, all five verses of which concur with Blind Lemon Jefferson's 1928 recording.  Finally, as Oster points out - one of the groups he recorded in Angola actually bore the name The Cool Cats - the popular songs of the fifties were as much in evidence there as anywhere else.  They have left their various imprints, lyrics, melodies and vocal styles, on several items.

We should not worry overmuch about an accuracy we can no longer assess, if indeed we ever could.  Instead we should accept this disc as testament to the genius of a people forced to despise their own past.  There is no form of music in the contemporary West which has not been touched by the blues.  Yet, even in the fifties Harry Oster was noting the tendency of young Blacks to dismiss the idiom as old fashioned and redolent of an Uncle Tom background they would rather forget.  Despite all the advances, black people still bear the scars of discrimination and, as long as white people react against them, they will react against the blues.  One day perhaps, when the world accepts all the variegated members of the human race as people, nothing more or less, black people will accept the importance of what their forefathers bequeathed that world.