While I have a great appreciation for early Zydeco, Creole and Cajun music, I must admit I've been less than in love with many of the more modern Cajun and Zydeco bands that have exploded onto the folk music scene in the last decade or two in Louisiana, Texas and Northern California.  Don't get me wrong - I understand that the music had to progress, to modernize in order to accommodate the tastes and influences of each new generation and truth be told, I find something ridiculous in those who celebrate nothing musical if it is not played on the sparest of instruments and sung in the raspy voice of someone's great-grandfather.  Still, I do find myself preferring traditional Creole and Cajun music to their modern counterparts.  One thing is that many of the songs these days are sung in English, not the traditional Creole language, which for me takes away from some of the power of this music. 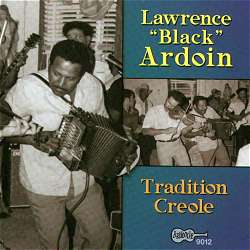 I can't say why for sure - maybe it is that I understand English so much better, though that seems a poor reason.  Another, perhaps better, reason is that I prefer the simple orchestration (accordion, triangle, fiddle) and the rhythmic complexity of the earlier traditional Creole music.

So, to say the least, I had my doubts when I first received this CD.  The instrumentation included accordion, fiddle, drums, bass, lead guitar, guitar, sax, and rubboard - much closer to the more modern lineups than to the traditional trios.  However, I was pleasantly surprised when I popped the CD and took a listen.  Tradition Creole is no-frills Zydeco music.  While the musicians lack the flair of artists like Clifton Chenier or the raw power and talent of Amťdť Ardoin, they hold their own.  The truth is Lawrence Ardoin has a fine voice, and Edward Poullard is a good fiddler.  At times Poullard's fiddle playing is maybe too good, and he seems like he is playing over the band, rather than with it.

While the music overall may be closer to modern Cajun and Zydeco music, some of the songs included are old traditional favorites.  Cofair and Midland Two-Step, both from the time of Amťdť Ardoin, are my favorites on the album, perhaps because they are the least typical of the modern Zydeco style.  Still, most of the other cuts are adequate, particularly when one realizes that this is essentially a live album with some mixing.

A brief note on Lawrence Ardoin.  Lawrence 'Black' Ardoin is the son of 'Bois-Sec' Ardoin, whose charming "rural" style of playing made him, along with fiddle partner Conray Fontenot, one of the stars of the revival of traditional Louisiana Creole music.  He is also related to the late, great Amťdť Ardoin, one of the first Creole musicians to ever record and one of the best accordion players I've ever heard ... for lovers of the accordion, I cannot recommend enough Arhoolie's release of Amťdť Ardoin's early recordings.

While I'll admit this is not an album I would search out, I am not unhappy to have it.  It draws great strength from its simple unpretentious representation of early urban Zydeco.  It is a recording those who attend Zydeco or Cajun dances at the local bar or dancehall might enjoy - but then again, why not go to the bar again and see a live band.  And that really is the problem with this CD.  It is a completely adequate recording, but it is really music best suited to a live performance, where you can dance (if you know how), sip a beer, see and feel the energy of the performers - Rod Stradling's review of the Bismarcks' CD is suddenly pushing its way into my head.  Maybe this CD will have greater import for me when live Cajun and Zydeco bands are a thing of the past and this CD is no longer just an approximation of the live performance.

All said, I must give Arhoolie records and its founder Chris Strachwitz credit for their untiring pursuit of 'people's music' here in the USA.  Arhoolie was one of the few labels in the States to actually record folk traditions as performed by current or recent folk artists raised in the tradition and not just re-issue earlier releases or solely produce the music of 'folk revivalists'.