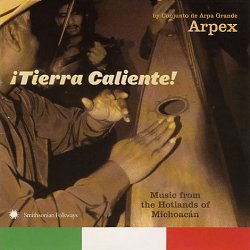 Tierra Caliente, a hotlands area located in Michoacßn, four or five hours from Mexico City, is home to a scarcely known musical tradition: the music of el conjunto de arpa grande 'big harp ensemble'.  This tradition can be described as a rural relative (perhaps even precursor) to the ubiquitous urban and highly commercialised mariachi.  The music developed a social function and would have been heard at births, weddings and funerals but continually faced extinction as the 20th century progressed and its commercial cousin swaggered through the popular imagination seducing musicians with its remunerative possibilities.  However, the harp ensemble fought on and the music has persisted.

In this incarnation of conjunto de arpa, we hear Arpex, a group of young musicians who have remained loyal to their community's passion for the rural style.  Organologists will enjoy the detailed notes on instrumentation provided by Daniel Sheehy, who also supplies useful biographies of each musician and track notes containing translated experts which nicely cue the theme of each song.  The principle instrument of the group is the arpa grande, a five-foot-tall harp with generally 37 strings.  This is accompanied by two guitars; the five stringed vihuela and the lower pitched guitarra de golpe.  Completing the characteristic group sound are two violins and a tamboreador (drummer), who kneels next to the harp and strikes the sound box with his hands.  The drummer follows the melody and has developed a high degree of virtuosity and musical empathy as a complement the traditional time-keeping role - track 10 provides a good example of this.  What is striking upon first listening is the impossibly high pitch of the male singers (especially tracks 9, 12 and 17).  And this is not falsetto singing; the Valdovinos brothers, Rafael and Javier, procured such unique abilities from an early age and add the essential aesthetic ingredient to the Arpex group.

This singing, combined with the melodious violins and driving rhythms, forms a repertory that is upbeat and spirited, full of pleasing melody and directness of emotion and musical structure.  A sense of community is clearly evoked through both the musical togetherness and a sense of the good-time country gatherings the music helps to establish and maintain.  The CD offers us a representative selection of all the traditional 'country genres' typically performed at social events with dancing such as the cancĒon ranchera (country song), son, jarabe, and valona.  The most popular of these genres, and the most satisfyingly quintessential, is the cancĒon ranchera whose rural simplicity laments unrequited love and betrayal.

I found this CD hugely enjoyable: infectious, and filled with emotional and musical richness.  Highly recommended.