The Art of Old-Time Mountain Music

According to the booklet notes, Kerry Blech, a musician and writer, was asked by Rounder Records to select a CD's worth of material from their back-catalogue as part of Rounder’s celebration of thirty years in the music business.  His selection comprises 23 songs and tunes that appeared on previous Rounder LP’s, together with a further 5 tracks that are issued here for the first time. 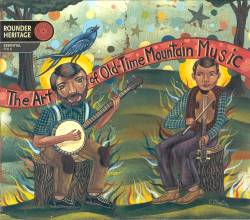 (In fact, the sleeve listing suggests that there are 6 previously unissued tracks, but Uncle Dave Macon’s Go On, Nora Lee - which was unissued during Uncle Dave’s life - actually appeared on the LP Laugh Your Blues Away in 1979).  And, it really is a stunning selection with extremely good notes.  There is some marvellous music here and I can think of no better introduction to the world of old-timey music.  But, in a post Oh Brother Where art Thou/Songcatcher world, I do wonder whether or not Rounder are being totally honest with us.  Surely the temptation to cash in on the current old-timey boom could not have been too far away from their minds.

Anyway, back to the CD itself.  Eighteen tracks come from white Appalachian singers and musicians, three from black Appalachian musicians and a single track from Tennessee’s Uncle Dave Macon, whose repertoire included material from both the black and white traditions.  There are a couple of Ozark tracks, a couple of revival duets, a single bluegrass track (and pretty old-timey bluegrass at that), plus a single song from cowboy singer Glen Ohrlin, which, to my ears, sounds rather out-of-place in this collection.  (Nothing against Mr Ohrlin, fine singer that he is, but he does seem to be rather outside the traditions that make up the rest of the album).

The album kicks off with Haywood Blevins, from Sparta NC, playing piano the way that his father played the banjo, dropped-thumb and all.  It’s a gem of a track and bears comparison with Hobart Smith’s piano work (on Rounder CD 1799, for example).  Several of Cecil Sharp’s Appalachian singers had pianos in their homes and were usually delighted when Sharp played their song tunes back to them.  And, of course, The Hill Billies, from the Galax area of VA - who recorded between 1925-28 - included a piano on several of their recordings.  However, most of the other Appalachian tracks feature either fiddle or banjo.  Sadly, many of the performers are no longer with us.

Some of the tunes are now relatively well-known, Benton’s Dream or Lost Indian for example.  Others, such as McMinnville’s Breakdown - a version of Speed the Plough - are hiding under alien titles.  One tune, Oscar & Eugene Wright’s Protecting the Innocent hides a title ‘not of savory character’.  Oh, come on!  Risk it!  Tell us!  (Mind you, with a nation that uses terms such as ‘death by friendly fire’ and ‘collateral damage’ - this to signify the murder of innocent women and children - I suppose that I should not be too surprised).  Other tunes are less well-known; Bob Carlin & James Bryan’s beautiful Farewell Trion, Perry Riley’s lovely Kentucky piece Feed My Horse on Corn and Hay, or Sam Connor & Dent Wimmer’s Old Time Fire on the Mountain, which sounds nothing like the usual Fire in the Mountain.  Oddly, some of the songs and tunes are already available on other Rounder CDs, Tucker’s Barn (on The Watson Family - Rounder CD 0129), Fox Chase (on the superb The North Carolina Banjo Collection - Rounder CD 0439), Blackberry Blossom (on Southern Ramble - Rounder CD 0352), Po’ Black Sheep (on Altamon: Black String Band Music from Tennessee - Rounder CD 0238), Rocky Mountain (on Bruce Molsky and Big Hoedown - Rounder 0421), Black Eyed Daisy (a version of The Gypsy Laddie/Black Jack Davy) on Joe Thompson: Family Tradition - Rounder CD 2161, The Boatman Song (a fine version of Dance, Boatman, Dance) on Uncle Henry’s Favorites (sic) - Rounder CD 0382) and Lost Indian (on the indispensable The Hammons Family: Traditions of a West Virginia Family and Their Friends - Rounder CD 1504/05).

Fields Ward’s song Bury Me Not on the Old Prairie (Laws B2) shows how ‘non-Appalachian’ songs can so easily enter other traditions.  Kerry Blech suggests a couple of possible recordings, by Jules Verne Allen (1929) or Bently Ball (1919), which could have influenced Fields, who was originally from Galax, VA.  In fact, the song was recorded by several other performers, including Carl Sprague (1926), Vernon Dalhart (1927), Obed Pickard (also in 1927), Bill Childers (1928) and Frank & Phil Luther (1931).  And, of course, it was published in several songsters and was no doubt sung on the radio.  The same could, I suspect, be said of Asa Martin’s fine version of the song Death of J B Marcum (Laws E19), which is sung to the tune of Jesse James, and the notes detail older recordings.  In this case, though, Marcum’s death did actually occur in Kentucky.  Another song, Dorothy Rorick’s The Housecarpenter (Child 243), is as fine an Appalachian version of this ancient ballad as one could wish to hear, especially when Ms Rorick’s voice leaps into falsetto passages with great dramatic effect.  Another female singer, the late and truly great Ola Belle Reed, gives us her own autobiographical High on a Mountain, which apparently recently earned a gold record via the singing of country artist Marty Stuart.  And this brings me to point of disagreement with Rounder.  Surely, with a performer as good as Ola Belle Reed, we should be seeing the reissue of her LPs in CD format, not just the odd track here or there.  The same goes for the tracks taken from the two albums of North Carolina and Virginia field-recordings that appeared as Old Originals (Rounder 0057-58).  These albums are chock full of essential, and timeless, music which needs to be heard in its entirety.  And I could say the same for the fiddle music of West Virginia’s Wilson Douglas or the Ozark songs of Almeda Riddle.

The final track, Lloyd Chandler’s stunning Conversation with Death, is of great interest on a number of levels.  Again, it brings us back to the Oh Brother/Songcatcher phenomenon - versions of the song being sung in both films - and, again, it makes me wonder just why we see it being included on this specific album.  Kerry Blech’s notes make mention of the British ballad Death and the Lady, which has other European parallels but which, actually, has no structural connection with Lloyd’s song (which is similar in shape to the Hymn All is Well that was printed both in America and England).  We are not told, however, that Lloyd Chandler claimed to have composed the song himself in 1916, following a ‘vision’, or some form of religious experience.  The song was recorded in 1928 by Vernon Dalhart (Columbia 15585-D) and the label adds that it is, ‘By a Blind Girl’.  Interestingly, Lloyd Chandler gave songs to Cecil Sharp in September, 1916, when the English collector was visiting Madison County, NC, though he made no mention of Conversation with Death to Sharp.  Sharp did, however, also collect songs from another Madison County singer, the youthful Linnie Landers who, by chance, happened to be blind.  We don’t know if Linnie sang the song (Sharp never collected a version), but, in a recent lecture given to the School of Scottish Studies in Edinburgh, visiting Professor Carl Lindahl showed that almost all of the early collected texts came from regions where Lloyd Chandler had worked as a preacher!  So, did Lloyd compose the piece?  Presumably there is money accruing in some film-company bank vault that could belong to his descendants, should they be able to prove that Lloyd was the composer.

The Art of Old-Time Mountain Music is, as I said, an extremely good introduction to the subject.  I suspect that many readers will already have some of the tracks on other Rounder CDs.  If not, then I would certainly suggest that this is one album that deserves to be heard.