Easy Winner; Turpentine Farm; Mississippi Delta Blues; Going to Germany; Take These Lips Away; Rope Stretchin' Blues; Tanner's Rag; I'll Take My Old Guitar; The Memory of Your Smile; Mother's Not Dead; Sittin' on Top of the World; Mineola Rag; Milwaukee Blues; After the Ball; Blues in the Bottle. 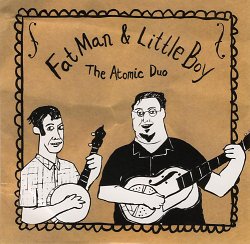 As I’ve no doubt observed in previous reviews, the best way to be faithful to musical traditions is very rarely to go for the slavish copy.  Slavish is never a good look.  It invariably sounds like what it is - a copy of something.  For my money, the artists who come closest to capturing what I love about old music are not the ones who have worked for years to get every note just right, to sound exactly like their examples, but the ones who seem to have an instinctive grasp of the energy of the music, of its heart, of what makes it special.  And who have the ability to channel that understanding into the music they make.  I’d include Fat Man & Little Boy in that category.

Here, Mark Rubin plays guitar and fiddle and Silas Lowe plays mandolin and banjo, both sing, and they present a set of hokum blues, country duets, ragtime instrumentals and jug band tunes, mostly from the 1920s and ‘30s.  A couple of tracks feature George Carver (who also produced) on harmonica.  Rubin has been around the Austin, Texas scene and beyond for quite a while and involved in various projects, covering various styles of music, ranging from Texas swing through Klezmer, taking in blues, old timey, jazz, bluegrass and anything else he feels like along the way, playing a variety of instruments with a great deal of skill and apparently boundless energy.  A couple of press quotes on his website describes him as “...  part Renaissance man, part neurotic outsider” and “that rare combination of ethnomusicologist and street fighter ...”.  I assume that the reference to fighting in the streets is metaphorical rather than literal (though it might not be for all I know), but either way it’s often apparently contradictory qualities like those that provide the impulse for vital and interesting music (or, come to that, vital and interesting art of any kind).  Lowe seems to be a younger man, but has been round long enough to acquire no little skill on his chosen instruments - some of his playing here is of positively virtuoso standards - as well as a good grounding in style and repertoire.

Another quality that so many revivalists miss is the sheer wit of older styles.  (As an aside, Rubin plays string bass in a old timey band called Hank Sapoznik and the Youngers of Zion, whose album is entitled The Protocols - you have to hand it to whoever came up with that).  Here, we are treated to lines like “I love to hear those systematically- disenfranchised people sing those old melodies, like Swanee River and Old Black Joe”.  But bringing out the wit of a music isn’t just about gags - I’ve no doubt that in the old days, audiences would crease up with laughter at lines we barely understand these days, but just as importantly, the music itself by virtue of its own sheer joyous power, would promote hilarity and good times, qualities in shorter supply in times of depression, segregation and poverty; the times this music comes from.  This is about moving people’s bodies as much as their emotions.  Again, Rubin and Lowe seem to me to be able to harness that vital quality in the service of their music.

The opening instrumental, a ragtime tune deriving from a 1928 original by Nap Hayes and Matthew Prater (but I think originally composed by Scott Joplin), beautifully played on mandolin with guitar accompaniment, gets us off to a good, lively, uplifting start.  Mississippi Delta Blues comes from Jimmie Rodgers, Milwaukee Blues from Charlie Poole, Rope Stretchin’ Blues from Blind Blake, Mother’s Not Dead from Charlie Monroe (possibly via Roy Acuff, or maybe the Stanley Brothers), all of which demonstrates a wide knowledge of the major artists of the day, while tracks like Turpentine Farm, from the highly obscure Pigmeat Pete and Catjuice Charlie and Blues In The Bottle, probably from Prince Albert Hunt, show a familiarity with some of the dimmer corners of the repertoire.  Always a good sign.  And while the originals derive from both sides of the segregated record catalogues, this colourblind approach demonstrates nicely how to assemble a diverse and varied selection that all works together.

The disc was “...  recorded live and without overdubs in the course of 3 hours on a lovely spring afternoon”, which is pretty much how it was done when the originals of these songs were laid down for posterity.  The result satisfyingly captures the energies and spontaneities of the music - there’s no false nostalgia here, just real music played in a real way, and played very, very well.

One final word of caution - the tracklisting doesn’t follow the order on the disc, which might be a wee bit confusing to begin with, but it’s easy enough to work out what’s going on.