When I first saw the title of this album I was immediately reminded of an article from many years back by the late Eric Winter in which he described a young girl that he heard at a session in Ireland as a 'spoonist of world class'.  OK, so there are certainly more strings on an autoharp than a spoon but how much can you do with them and how many masters are there? 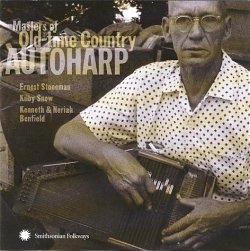 Over many years listening I have heard very few people that are able to make an autoharp sound interesting when played solo.  The fact is that this is a novelty instrument enabling someone with very little musical knowledge to play a basic accompaniment to a song or another instrument.  I think that on that basis it works fine and probably has spurred people on to play something a little more challenging.  As used by The Carter Family and the Stoneman Family for instance it worked well but where it is the sole instrument I find it hard to listen to for very long.

There is one autoharp player that I do find interesting as a soloist and fortunately he is represented on this album with thirteen tracks.  Kilby Snow is the one person that does seem to have mastered the instrument.  His style of playing is unique as far as I am aware, using what he refers to as his drag note method.  Somehow this enables him to get slides and effects which nobody else appears to have mastered.  I ought to admit here that I have not heard many of today's performers so I am unable to comment on them.  I do however regularly play in sessions where a couple of musicians play autoharps from time to time.

The album opens with with an instrumental waltz played by Ernest 'Pop' Stoneman.  I think it must be about the fastest waltz I've ever heard, I could never have got around the floor at the school hops at this speed without falling over and giving up any hope of impressing the pupils from the local girls shool with my terpsichorean abilities.  It's fast and pretty boring.  Not a good opener.  The second track Sweet Marie an autoharp duet by Ken and Neriah Benfield doesn't work too well either, the sound is rather muddied, which I guess is hardly surprising.

Kilby Snow's first entry is an old war horse John Henry.  By comparison with the previous players, the melody here is quite distinct.  I suspect he plays less than the full range of strings which cuts down the amount of overtones or, it might be his upward brush stroke and the fact that he plays the instrument left handed.

Track 5 Coming 'round the Mountain another old war horse instrumental played by Pop Stoneman works better for him by having the addition of Wade Ward's banjo to give a bit more lift.  Sweet Sunny South is a fine old song sung by Pop but his style of accompaniment makes it feel rushed.  Bile 'em Cabbage Down works a lot better because it is more suited to the tempo used and in addition to the vocal Pop also uses a racked harmonica.  The instrumental Marching Through Georgia also works pretty well.  In the notes it states that this civil war tune was so well known that it was used in wind-up music boxes.  I might add that I once saw it wind up a couple of old time players at a fiddler's convention down South when a young somewhat naďve yankee kid decided it would be a good tune to play at their session.  Well, it was only about a hundred and forty years after the event.

Neriah Benfield makes his second appearance backed up by his son Kenneth on guitar which to my ears is a definite plus.  Ella's Grave is apparently the melody for an old ballad but it comes out more like a march.  Waltz by Neriah shows that he didn't hang about on the dance floor either, much like Pop Stoneman above.

Shortening Bread an autoharp solo by Kenneth Benfield shows up the worst effects of this instrument and comparing it to the next couple of tracks by by Kilby Snow it shows just who is and who isn't a master of the instrument.  Kenneth also plays a pretty abysmal version of Bonaparte's Retreat which to be perfectly honest should have remained unissued.

Reading the above it seems like I am being a bit dismissive but let me say this; if you are a lover of the autoharp or a newcomer who wishes to hear more then this is a worthwhile acquisition despite the one or two duff tracks.  There are a total of 38 tracks, 14 of which are previously unissued and a playing time of 71 minutes.  There are plenty of vocals by Pop Stoneman and on I'm Alone All Alone he is joined on banjo by Mike Seeger.  Kilby Snow also has the addition of Mike Seeger on guitar on Wildwood Flower and on Tragic Romance Mike assists on banjo along with Hazel Dickens on guitar.  Kilby Snow throws in a vocal or two and is also joined by son Jim for a duet on one number, albeit a pretty hackneyed Red River Valley.

All of the recordings were made by the indefatigable Mike Seeger who supplies notes and information on the recordings and performers.  There are also informative track notes by the late and very much missed Charles Wolfe in an illustrated 32 page booklet.