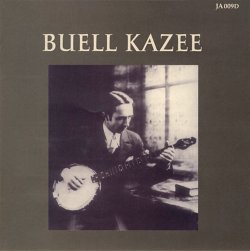 Loyal Jones begins the booklet notes to this fine CD thus: The Appalachian Mountains have nurtured many fine traditional musicians, and the late Reverend Buell Kazee was one of the finest.  Until recently I would have found such a bold statement a bit hard to swallow, since all I had heard of him had been a few of the 78rpm tracks he had recorded for Brunswick in his late-twenties.  These showed, in my opinion, a fine banjo player but only a moderately interesting singer (maybe I'd not heard the best tracks?).

Then, earlier this year, whilst preparing the Meeting's a Pleasure 4-CD Set of Mark Wilson's Kentucky recordings, I discovered that Mark had recorded Rev Kazee quite extensively in the late-'60s, and was including two tracks in the Set.  Kazee's Inconstant Lover (from which the Set took its name) really blew me away.  I feel that the 69-year-old Buell Kazee is a far more interesting performer than the 29-year-old one was ... and isn't that so often the case!

So it's a great delight to welcome the original June Appal LP Buell Kazee (June Appal Recordings 009, 1978) with the addition of seven further tracks, in CD format; approximately 70% of the whole being Mark Wilson's recordings.

As a producer of 'historic' recordings myself, I truly envy Loyal Jones and the other producers of this CD their access to numerous interviews with Buell Kazee, and to his own writings, in that they have been able to provide such an in-depth booklet to accompany the record.  He speaks eloquently about his life and his music, enabling us to get a solid picture of a complex and unusual man.  I particularly love his description of those rare moments when the music is so good that you feel it's a real privilege to be able to be a part of it.  Talking about the get-togethers in his or other musicians' homes, he describes instances when a special magic would prevail:

Picking the banjo by the fireside at night, you know, it would lead up to a mood.  It'd get so everything you’d touch would be good.  You wouldn't miss a note.  Everything you played had a soulful quality about it - an emotional quality.  That was the thing that made it good.  Now it just couldn't come up like we’re doing now.  You can’t sit down here and say we’re going to demonstrate this and that and do it that way.  It doesn't work that way at all.

Similarly, he describes the way two musicians would sometimes play together ... a technique I've never seen or heard documented before:

The fiddler and banjo picker - that was I think the famous combination of the mountains and the best - and it would get so that the fiddle bow would just dance on the strings.  It'd just tip the strings and by that time the whole thing was running by itself.  The banjo picker and the fiddler were simply in an emotional automation.  They sat with their knees interlocked - your right knee would be between my knees, you see, and your left knee on the other side - be so close together it would just weave itself together till there was just one beat all the way through.

Fortunately, I don't have to go on at length about Buell Kazee, since Mark Wilson has a lengthy section about him in the booklet notes to the aforementioned Meeting's a Pleasure 4-CD Set - if you don't yet have a copy of your own, you can find it here.

All in all this is a lovely record - there are few real stand-out tracks, but the whole thing is a thoroughly enjoyable experience.  My own preference for ballads leads me to select The Butcher's Boy as a sound clip (left), and another story song of the tragic and sentimental sort, The Orphan Girl, carried by a gorgeous tune, of which Buell Kazee told Mark Wilson "I guess if I had a favorite, that would be it." (sound clip right).