Tracks: Trials,Troubles, Tribulations / When I Can Read My Titles Clear / Born To Serve The Lord / Chow Time / Aunt Dinah's Quilting Party / Do You Call That Religion? / The Cabin in The Valley / Give Me Just a little More Time / I See God in Everything / House of Gold / Ain't No Grave Can Hold My Body Down / Raggin' The Wires / The Early Bird Always Gets The Worm / John The Baptis t/ I'm Glory Bound / The Parting Hand / Black Mountain Rag /Jacob's Ladder.
(from WKSK West Jefferson, N.C.) When The Saints Go Marching in / I Want To Be Ready / If I Could Hear My Mother Pray Again / Sweetest Mother / Church in The Wildwood / The Old Rugged Cross / He's A Wonderful Saviour.

Like so many great musicians in what we generally term 'folk music', I don't feel that Estil Ball got as much recognition as he deserved during his lifetime.  It wasn't that nobody was aware of his existence - as early as 1941 he had been recorded by Alan Lomax, and possibly even two or three years prior to that.  Lomax had apparently met Ball at an early Galax Fiddler's Convention.  Ball lived roughly 30 or so miles from Galax in the tiny community of Rugby, Virginia, a few miles from where he was born and where he and his wife Orna continued to live until hiss untimely death in July 1978.  It was at Rugby where Lomax recorded Ball on the porch of the Henderson household.  Sylvia Henderson is a cousin to Orna and the house occupied by her and her husband was the only one in Rugby at that time to have electricity. 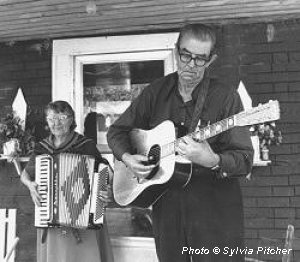 Lomax again recorded Estil and Orna Ball during his well documented field trips in 1959 and 1960.  It was a BBC/Lomax documentary programme featuring recordings made on this trip that first introduced me to his wonderful fingerpicking guitar style, I had never heard anybody make an acoustic guitar swing like that.  Lomax announced him as "my friend E C Ball, a school bus driver from Virginia", and the sound just blew me away.  I couldn't then understand how a musician of that calibre should have to drive a bus for a living.  Since that time however I have found that it was not an unusual occupation for musicians in the South. Fiddling Fred Price over in Trade, Tennessee was another.

E C did have a vinyl album released on the County label in the late 60's with the Friendly Gospel Singers, a quartet which included Orna but as the title would suggest contained all Gospel material.  The first album to show anything like Ball's wider range of material was Rounder 0026 issued in the early '70s and it is that album that is re-issued here on CD with the addition of two extra tracks - plus a further seven tracks from the radio programme which Estil and Orna did for a number of years over station WKSK out of West Jefferson, North Carolina sponsored by Brownie Hodge's BodyShop in West Jefferson.  Estil and Orna would tape these programmes in their small house up on the Blue Ridge Mountains on the Virginia/North Carolina state line and drop them off at the radio station for broadcast.  It was with some dismay that during a visit with Orna in 1978 that I found out that as far as she was aware no tapes of the broadcasts existed as Estil would just re-record programmes over existing tapes!  Fortunately, as Mark Wilson explains in the notes accompanying this disc, Ken Irwin of Rounder discovered Ball's method in 1972 and asked if Rounder could have the tapes.  Ball must have agreed because we are now fortunate enough to have an example of a complete programme here (actually made up from extracts from two programmes) - something that I thought was not ever going to be possible.

Much of this album consists of gospel material but all of the material is given the same wonderful swinging guitar accompaniment sacred or secular.  On some tracks Orna subtly chords along solidly behind on accordion, never intruding.  E C 's voice is wonderfully rich and Orna's harmony vocals are right on the button.  The bulk of the material here is either traditional or was written by E C , but he does do a solo version of Hank Williams' House of Gold.

Just in case it is not obvious from the above, I have absolutely no qualms at all in saying that this is a great album - I have been listening to the vinyl version for twenty three years now and still enjoy it thoroughly every time.  It is good to see that at last other people are recording some of Estil's songs - for example Robin and Linda Williams, Peter Rowan and Jerry Douglas and Ginny Hawker and Kay Justice - not to mention E C's near neighbour and son of Sylvia, Wayne C Henderson, who comes closest to Estil, using the same three finger style that he learnt from him.  I feel that I should particularly point out Estil's version of Black Mountain Rag - a number which has probably become mostly associated with Doc Watson because of his wonderful flat picked version - and a piece which many flat pickers aspire to.  Well listen to this finger picked version and try that!