It's interesting (well, that's one of the words I could use) that in the nearly 30 years since Musical Traditions first publication, the number of CDs appropriate for review in this magazine has steadily diminished.  Or perhaps it would be more accurate to say that the number of CDs sent to me for review has steadily diminished - particularly in recent years.  It's possible that the critical aspect of MT reviews has made record producers a bit leery of us, when they can easily find gushing, positive, anodyne accounts of their products in countless other publications, both actual and virtual.  But MT remains pretty well the only place where records like the three dealt with here would be reviewed at all.

Yet a trip to London last weekend resulted in these three being pressed upon me, and I'm puzzled as to why the record companies concerned didn't send them in the first place.  This is particularly galling because I still get loads of CDs sent every week for review, but ones containing traditional material (or even mostly traditional material) get fewer and fewer.  I find that most CDs come through PR companies of some sort, who send them out to any publication with the word 'music' in its title, but I remain puzzled as to why specialist record companies don't bother to make a list of ones where their sort of music gets intelligent and enthusiastic reviews.

Anyway - let's have a look at the records.  First off, the Koo Nimo one. 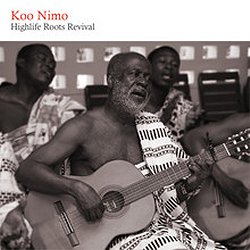 This is a real delight!  Ben Mandelson, the record's producer and recordist, realised that the 78-year-old Koo Nimo wasn't all that happy about making the recording in a studio, and asked him where he usually played.  Accordingly, they decided to do it al fresco in his back yard at home in Accra (as Ben had done earlier with the splendid Introducing ... Shiyani Ngcobo [World Music Network INTRO101CD]).  This decision was utterly appropriate, since Ghanaian Highlife music is but a modern development of 'palm-wine music', which is what Koo Nimo actually plays - a musical style named after the strong alcoholic drink imbibed at outdoor acoustic sessions, where musicians swapped their songs beneath the starlit sky and where palm-wine music was born.  You even hear a cock crow at the start of one of the tracks!

Koo Nimo was born in 1934 in the Ashanti region of Ghana.  By his early twenties, and by the time Ghana had achieved independence (1957), he was well respected across the nation for his gentle acoustic approach and versatile skill.  During the 1960s he studied science in London and schooled himself in several diverse musical styles, including Western classical music and flamenco guitar technique.  He is also a keen jazz fan and holds a deep respect for the music of American pianist Thelonious Monk.  Though well versed in multiple genres, Nimo’s own music remains firmly in classic palm-wine style.  Ensuring the continuation of tradition is a sentiment he holds dear, and one he instils in his music.  Old Man Plants A Coconut Tree is an ode to the virtues of preserving tradition – the lyrics intone, 'Grandson, I know I won’t live to see the fruits of my labour.  But because of you, and children yet unborn, I am planting the coconut tree.'

There's far too much enjoyable music and singing to go into detail about all the songs I particularly like, but track 1, See Wo Nom Me, admirably sets the scene for what is to come.  This is a lovely record! 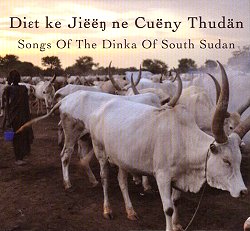 The second CD, although also from Africa, is a rather different sort of music - and one which almost no one outside Sudan is ever likely to have heard before.  Apart from one book published by Francis Mading Deng in 1973 on song lyrics, no formal research has been conducted on Dinka music.  The Dinka People are from South Sudan, and its long struggle for independence from a Northern controlled Sudan is probably quite well-known, at least from News bulletins.  So it may be the case that the people of the South haven't had a great deal of spare time for recording their song traditions.

Cattle appear to be central to the way of life for the Dinka, and their main economic means of survival ... it also seems that they spend a good deal of their time as herdsmen singing to them - the cows, that is.  I used the term 'herdsmen' since it seems that most are male, although there are also a few women heard singing on this CD, and there are a couple of tracks of two or three people singing together, although I guess herding is a mainly solitary occupation.

When I were a young boy-chap I had a little, blue, china scottie dog, with whom I shared all my little sadnesses and grievances: "Mum was very cross today - I don't know why, because she ........."  I get the feeling that the Dinka's cows stand in for Scottie - although their complaints are of a rather more profound level than mine ever attained.  "Songs of cows and Kalashnikovs" was how Ben Mandelson described this CD to me!  There's quite a bit of mooing and other animal noises to be heard behind the singing, and what I take to be finger-tapping of rhythms.

The leader of the resistance in the south was betrayed and killed by the Arabs.  Makur!  When the world heard, things became tense.  This land demands sacrifice.  It claimed our leader Deng - Deng Nhial is dead.  Even though he died and we have been orphaned, we are proud to be the orphans of Deng William.

(I can't give the title of this song accurately, or even that of the CD itself, because I can't persuade HTML to display some of the special characters used.)

The songs on this CD were recorded for a project entitled Metre and Melody in Dinka Speech and Song, which was conducted between 2009 and 2012 by researchers from the University of Edinburgh and the School of Oriental and African Studies in London, in collaboration with Dinka researchers in South Sudan.  The academic aims of the project were, first, to understand the interplay between Dinka song structures and the Dinka language (which distinguishes words not just by different consonants and vowels but also by means of vowel duration, pitch and voice quality), and, second, to learn more about the song tradition and the ways it has responded to the intense disruptions caused by protracted civil war.  Further information about the project can be found at: www.lel.ed.ac.uk/nilotic 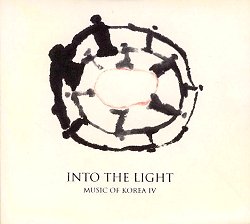 If the songs of the Dinka are unknown to almost all of my readers, I'm pretty sure that the same can be said of the music of South Korea.  I've certainly never heard any before ... but what a revelation!  Pop the CD into your player and this is what you hear: track 1, Geomungo Factory Movement on Silence.

This is not traditional music as such, but it is a modern composition based very strongly on traditional music, from a culture in which traditional music is still alive, and can be referred to (and is) simply and immediately.  So I don't know what to call it - apart from stunning!  It's played on four 6-string zithers, called the geomungo; an instrument traceable back to the 4th century in Korea.  It's usually played with bamboo hammers, but the 'factory' part of the group's name derives from the fact that they personally built their instruments adapted to be played differently - one is hammered, one strummed, one plucked and one bowed - hence the diverse sounds you hear in the recording.

Indeed, it's the sounds, perhaps, as much as the music, which fascinate on this CD; here's another example, from Bulsechul - Soyoyu.  They are a 7-piece group playing stringed things, both plucked and bowed, woodwind and drum - and making the most amazing and interesting sounds.  I'm constantly wondering "What on earth made that extraordinary noise?"

Actually, the DVD, of the same 11 groups playing 11 different pieces at the same concert, came as a bit of a let-down because that mystery is now resolved, and you can actually see what's making the amazing sounds.  Sadly, for me, it wasn't all ancient traditional wooden instruments, and several western guitars and keyboards are to be spied amongst the arrays of things that look as if they came straight off Seventies' Sci-Fi LP covers.  But I must say that the DVD is beatifully produced and adorned with lovely ink paintings by Suh Se-ok, and functions perfectly.  The 'let-down' above is only slight, because it is realy a delight to be able to see how the players actually produce the sounds you're hearing.

Whatever - this is an amazing pair of discs, and it says a lot for modern PA technology, not to mention someone's recording abilities, that all of this was recorded live at a concert!  This is one of those records that I impose on any hapless visitors to our house these days - it's far too interesting to keep to myself.

As the title implies, this is the fourth release by the Korea Arts Management Service, in a series intended to bring Korean music 'Into the Light' of world attention.  I look forward to Volume 5, and may well check out the first three on the Net ... can they possibly be as good as this one?  We shall see.