Going Back to Crawford

I dont know if I am allowed to say this on the Internet - but by buggery this is a good CD.  And a very welcome one too, for while recordings of the country blues by active (and on occassion inactive) performers were certainly not uncommon (if not almost ten-a-penny) twenty years ago, nowadays the chance to hear previously unreleased tracks by a giant of the idiom is a cause for undiluted joy.

And in anyone's book Big Joe Williams would be classed as a giant of the country blues.  Born in 1903 in Crawford Mississippi, he was making his way as an entertainer by the age of twelve. 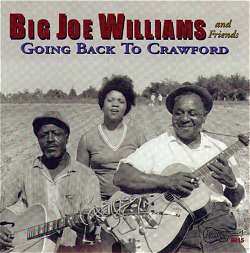 As old as the music he championed, by the early 1920's he was already an experienced performer on medicine shows and the streets, at house parties and fish fries, in saloons and barrelhouses and while his ramblings had taken him across the States and to Europe, he was still doing much the same weeks before his death in 1982.

His recording debut in 1935 presented to the world a phenomenal and unique performer - and yet one completely within the Mississippi blues tradition of the day.  With all the rhythmic attack and vocal dynamism of a Charley Patton or a Son House, his music was somehow more worldly, more open to outside sources, more sophisticated?  This was country blues all right, but country blues not scared of what the city had to offer.  Indeed his 1947 recordings in Chicago with Sonny Boy Williamson could, through their obvious impact on Muddy and Little Walter,

be seen as the very bedrock of that city's defining contribution to Blues Tradition.  And how many rock stars of the Sixties and Seventies cut their musical teeth in the back room of a pub playing Big Joe's greatest hit? (sound clip)

But Big Joe's talents were not restricted to performing.  He had long acted as a talent scout and even amateur record producer, introducing many performers he had ecountered in his travels to the small collector labels that blossomed in the Sixties catering for the growing white audience for authentic blues.  Notable amongst these were his collaboration with J D Short for Bob Koester's Delmark label and with Pete Welding for Testament Records (a fascinating article by Welding on these experiences can be read in Blues World 43 Summer 1972 - if you can find it).  And so it was with Chris Strachwitz and Arhoolie Records when in 1971 Big Joe assembled a group of friends together in Crawford, Miss.  to record.  The results are magnificent and if there is a better country blues release this year then we are in for a treat.

For most of the set Big Joe acts as accompanist but on his own tracks it is all there: the idiosyncratic nine string guitar; the furious rhythm; the falsetto whoops; the bass snaps and - more heavily featured than normal - some virtuoso bottleneck guitar.  Nowhere is this better demonstrated than on the opening track Back Home Blues which I rate as the man at his ultimate best.

Of the other performers - and sadly no information is at hand on them - Glover Lee Connor and Amelia Johnson you would have to describe as the equivalent of enthusiastic 'floor singers' - fine at a party or in a juke joint, though.  Connor would appear to be of a younger generation as his style has more than a hint of Southern Soul about it (Big Joe's slide accompaniment is surprisingly effective though) while Johnson is limited by both vocal range and uninspiring material.  Ironically, her change of heart over the recordings prevented this CD's earlier release.  Austin Pete, whose photograph suggests he was of a similiar age to Big Joe, is altogether more interesting.

Playing in a gentler, more melodic style, his music harks back to the Twenties and to me sounds for all the world like Furry Lewis from Memphis.  His traditional I'm Wild About my Jelly Roll is an undoubted highlight.  (sound clip)

However the most interesting performer here, and the most featured, is John 'Shortstuff' Macon.  He had already travelled with Big Joe, his uncle, to New York in 1964, when aged 32, and cut an LP for Victoria Spivey's label and enough material to share one side of an LP on XTRA (the other side, rather incongruously was by Rev Gary Davis).  This latter was one of the first blues records I ever bought and it is still a favourite.  Macon's singing is very much in a freer, almost field holler style than that presented by most commercially recorded bluesmen and the overall effect, enhanced(?) by the rattle created by the pick-ups on his guitar, sounds quite archaic.  My Baby Stopped Drinking Water ('My Jack' on XTRA), Sugar on the Bottom, a version of Blues in the Bottle, and even his take on Little Walter's My Babe

all bring to mind the surging rhythms of North Mississippians Fred McDowell and R L Burnside, while his outstanding version of the traditional Corrine marks Macon as an important country bluesman.  (sound clip)

It is interesting that the picture of today's Mississippi blues is being sketched by Fat Possum Records, most successfully by Burnside, and several of their releases feature this relentless, almost hypnotic, traditional based style as displayed by Macon and inspired as much as anyone by John Lee Hooker.  Their releases are fine but this CD is outstanding.  A big 'well done' to all concerned but especially to Big Joe.