The Birds Upon the Tree

... and other traditional songs and tunes.

First things first.  As Sergeant Joe Friday used to say on Dragnet, "Give me the facts, ma'am.  Just the facts."  The facts, then, are that Musical Traditions offers yet another welcome selection from the impressive and extensive collecting activities of Mike Yates. 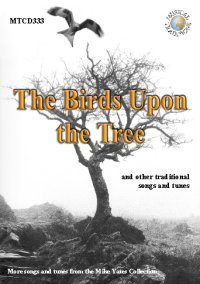 The featured songs and tunes, beautifully remastered at the National Sound Archive, are as effective as those on any multi-performer compilation issued during the past two decades, and this CD is better than many.  All involved in the production are to be complemented on a job well done, and Mike Yates, in particular, for allowing us to further share the fruits of his labours, and for spending a considerable amount of time and effort in assembling the useful and informative booklet notes.  Not only does he lay out the circumstances of collection in an unvarnished manner (including the admission that he has lost the name of one singer heard here), but the textual transcriptions and notes on individual items are exemplary.  In addition, series editor Rod Stradling has maintained that polished uniform appearance which has characterised the label for the past few years.

As to the contents, the earliest recording here (track 3) dates from 1963, the latest (track 13) from 1989.  Familiar, yet always welcome, performers include Shropshire singer Fred Jordan, Sussex concertina maestro Lewis 'Scan' Tester, and Co Donegal all-rounder Packie Manus Byrne.  Most others will be known to anyone who, like myself, has been contentedly immersed in this musical form for more than three decades.  Some, such as George Spicer and George Fradley, have had solo vinyl or cassette releases, while others, Freda Palmer, Bob Blake and Charlie Bridger among them, have featured on earlier compilations from Topic, Folktracks, Veteran and, indeed, MT itself (MTCD311-2, which should be consulted for additional historical and biographical data).  The remainder we know mainly from Yates' earlier writings, or from personal contact with other collectors such as Gwilym Davies.  These include Ivor Hill and family, Alice Franscombe and Archer Goode.  Of this latter's musical sources, Sam Bennett, that charismatic fiddle player and doyen of the Ilmington (Warwickshire) Morris from 1908 onwards, was never, to my knowledge, noted as having the trio of songs attributed to him here in his repertory, so it's useful to learn of these.  Surely, though, Goode had material from other singers.

The overall programming is sufficiently varied to sustain extended listening effectively.  Particularly noteworthy are the pair of songs from Packie Byrne and the three Music Hall numbers from George Fradley.  A familiar waltz by 'Scan' Tester appears in a different recording from those already issued, and comparison of tempo and variation is always a useful exercise.  As ever, the concertina playing is seductive and sinuous, but just listen to the accompaniment of Rabbidy Baxter, playing with a beater on a skin-covered tambourine with jangles, for an idea of how simplistically complex English percussion can be.  Similar complexity is evident in the bass hand of accordion player Harry Cockerill, featured on three tracks here.

Following the trend of many collectors active during the the post-Cecil Sharp era (Sharp died in 1924), Yates has adopted the broadest possible definition of the folk song tradition.  Other than a Scottish ballad on the lips of an Irish singer, there is nothing here which dates from earlier than the nineteenth century, and some later than that.  Nothing akin to the older (some much older) ballads that Yates himself was finding in the rural southern uplands of America during the same period.  And we may make an analogy here with the experiences of Cecil Sharp seven decades earlier.  No criticism is intended, merely a reiteration of the often-stated observation that musical tastes changed rapidly and extensively from about 1870 onwards.  Reasons are legion, and have to do with changing fashion, extensive migration into the urban sprawls, compulsory education, the establishment of reading rooms and social clubs in rural areas, and the enforced notion of 'rational recreation' imposed (initially from above, but increasingly from within the social groups who carried the culture which interests us) in city and hamlet alike.  Every facet of the prior 'traditional' culture - perhaps 'mediated' culture is a more accurate and less ambiguous term - was affected, whether requiring cooperation and organisation (for example, morris and social dancing, mumming and wassailing) or individual preference (choosing which ballads, songs, stories, and riddles to perform in public, or, increasingly, to retain mentally with no audience other than oneself).

This compilation certainly holds quite a resonance for me, given that I knew personally (however casually) a number of the featured performers, have been in the homes of a few (I never felt more as if I was standing in the 19th century than when in Fred Jordan's cottage), and forged a particularly strong relationship with one of them.  Freda Palmer, born in the village of Leafield (Oxfordshire) but relocated to the nearby market town of Witney by the 1970s, put me up on a number of occasions during my field trips to Bampton during 1978 and 1979, at the beginning of what eventually turned out to be an extensive programme of oral interviewing, in pursuit of the history of morris dancing in the south Midlands.  During one of those stays I wallpapered her bathroom as a 'thank you' gesture.  After moving to within a couple of miles of her home, in late 1979, I saw her fairly frequently.  We spoke at times about the social life of her home village (she was related to Henry Franklin, Sharp's chief informant on the Leafield Morris), but I never recorded vocal items from her.  That was never my personal brief.

Jacquey Gabriel I knew pretty well almost three decades ago, when the pair of us inherited the Ballad Shop at Sidmouth Folk Festival, following the retirement of Fred Austin.  All of us who ponder these things evolve a specific definition of what constitutes a traditional singer, and I have to confess that I find it difficult to accommodate Jacquey into my own matrix.  Yates has, however, apparently chosen to issue only the songs she learned orally from her father as a child.  Reflecting further, it was in the Sidmouth Ballad Shop (in effect a more sharply focused singaround), in 1977 if memory serves, that I first plumbed the depths of Freda Palmer's repertory, by giving her more frequent and extensive spots than the singaround concept generally implies.  I even recall being taken to task by one revivalist singer who felt I was abusing my Democratic brief.

I could sing the praises of this release for eternity, stressing its historical importance and aural pleasures, but unless you belong already to that minuscule and dwindling sub-set (numbering perhaps a few hundred souls - one fewer since Keith Summers passed on) who are empathically predisposed towards this musical form I am unlikely even to persuade you to give it a listen.  It's a tradition which has effectively been lost to time.  For a century or more English song collectors have been stating that their harvests were the final flourish of a long-standing musical culture.  My personal belief is that it had lost its social relevance (except among marginalised groups such as travellers) by 1914, yet it lingered on the lips of some of the post WWI generation, but the items here really are the long-heralded final flowering.  The music and song as collected will be safely preserved in libraries and archives, and in the personal record collections of those of my generation (I was born in 1949).  But I see no evidence that it strikes a resonant chord in members of my son's generation (born 1974), much less in those younger still.  And, indeed, there is no reason why it should.  Culture is invariably shaped by the tastes and dictates of a specific time period.  The current across-the-board dumbing down of mass culture, as exemplified by reality television, soap operas and formulaic pop music, is specifically designed to be absorbed passively, with a minimum of concentration or intellectual engagement.  Those very considerations, in fact, demanded by the traditions represented on this very excellent CD.