Balladeers and Songsters of the Texas Frontier

I know that I am not widely known as a mystic, and I don't know whether it is because I am writing this the day after the eclipse, but when I heard the first track on this CD my head was full of thoughts unnatural.  In 1933 a seventy year old black convict, incarcerated on a Texas prison farm for 50 years for throwing rocks at three men (and killing them), is singing a centuries-old British ballad where the hero is transformed into the persona of a cowboy. 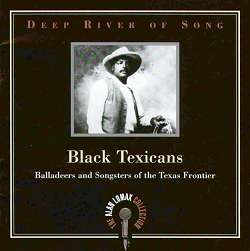 Mose 'Clear Rock' Platt's song, first composed on the great cattle drives of the 1870s, lies hidden for 70 years - and now a cost accountant in his bungalow in Southend can offer his words of wisdom on it

via a medium that will transmit his thoughts around the globe in 70 seconds.  Like the eclipse, I find the whole thing rather awesome - and rather spooky.  (sound clip - St James' Hospital)

Still enough of that nonsense ... what has 'Black Texicans' got to offer?  Well, rather a lot, actually.  29 tracks of field recordings made by the Lomaxes (primarily John) in East Texas between 1933 and 1940 and covering an extraordinary range of black folk musics that fed into and out of the popular musical styles of the day.  Little of this type of music was recorded, commercially or otherwise, and few of these musical traditions survive today, so - whatever today's critics' opinions of the early collectors may be - it must be recognised that, without their efforts, our knowledge of the background to the music we love would be seriously poorer.

John Lomax was a Texan.  He loved the cowboy lifestyle and he loved cowboy song, and a fair slice of the notes centre on this passion and, in particular, the black input into both.  Now this is an important area, and one that has been deliberately and cruelly ignored in the past.  The recent and excellent TV series 'The West' acknowledged it, and I would imagine that Quintard Taylor's recent publication 'In Search of the Racial Frontier' will spur further research.  That said however, it should be noted that only six of the tracks here could easily be ascribed to a black cowboy tradition and that, of the five performers, none 'made half a million pulling on the bridle reins'.  Indeed, while Lead Belly contributes his superb Western Cowboy with its fantastic imagery of Bunker Hill, Buffalo Bill and Jesse James, the other version of this song, by one Percy Ridge, becomes after but two lines a fairly straightforward reading of the old ballad Our Goodman (Seven Nights Drunk).  Now Child Ballads sung by African Americans are not common - indeed they are damn rare - but this old warhorse turns up quite regularly, even being recorded commercially in the fifties by Sonny Boy Williamson.

Pete Harris, a 33 year old ranch hand when recorded gives us a version of The Buffalo Skinners, (a song later immortalised by Woodie Guthrie), and James 'Iron Head' Baker (so named because when a live oak fell on his head the tree broke!) has the longest and probably the finest version of St James Hospital (The Dying Cowboy) ever recorded - it really is quite superb.  And Mose Platt, whose version of the latter song you heard earlier, adds a version of The Old Chisholm Trail (An-a-whoop-ti-yiddle-um-yea) that has so much life and vigour in it that I have been singing it in the office all week - much to the distress of my work chums.

Much of the remainder of the collection could readily be described as 'play party' pieces - a term often encountered ...  but what does it really mean?  Paul Oliver, in his excellent but all too brief contribution to the notes, has 'Play parties were once a staple in American rural life.  Mainly for the young, they were an important setting for courtship and featured games, plays and dances.  They were performed without instruments but often with handclapping.'  This was a songstyle heard throughout the South, and beyond I imagine, and is an important area of black music which deserves greater research.  It is a vital and, by definition, a happy music, and these sentiments pervade the entire collection.  They even pervade the work songs here.  Listen to Lightnin' Washington's Yellow Gal or the gentle, loping Pick a Bale of Cotton or The Angelina Quartet's Ha Ha this-a-way (all songs associated with Lead Belly, incidentally) and you hear none of the agony or anguish the Lomaxes found and preserved at Parchman Farm - though it is difficult to imagine the conditions in Texas were any less vile.  No - these performances, whether intentionally selected or not, are designed to entertain and amuse - and none the worse for that.  Indeed, it is even suggested that Mose Platt's Long Summer Days was designed to amuse the guards as much as the convicts.

A log-rolling song by Uncle Billy McCrea (introduced to Lomax by the president of The First National Bank, and who claimed to be 117 - but probably wasn't) sounds for all the world like a ditty he would use to entertain one of his grandchildren - he had 35 kids himself.  While old 'Clear Rock' (fast becoming a favourite) has all the words to Old Joe Clark and a long and lively version of That's All Right Baby that I am sure Butter Boy would have learnt, had he heard it.  Butter Boy was a 13 year old who had mastered the art of 'eephing'.  Heard previously from Nashville's Jimmie Riddle, this extraordinary vocal style has, according to Oliver, similarities with the singing of British school children.

Well, much as I have the greatest respect for Paul's knowledge, I have to say that if I ever heard any of my neighbours kids sounding like this, their parents would be informed immediately! (sound clip)

Henry Truvillion - a source of material highly regarded by the Lomaxes - reinforces the interaction with white traditions with Old Aunt Dinah and Walk a Cholly Walk which feature a form of 'hollering' found among white communities in the Appalachians.

And, finally - the Blues.  It must be remembered that when these recordings were made the country blues had only been in a recognisable form for thirty years - a mere blink of the eyes in terms of traditional music - and, in the rural South at least, was still a popular music of the day.  It must be considered quite radical, then, that the Lomaxes decided to preserve it.  An equivalent would be a present day folklorist looking to the music of Wishbone Ash or Earth Wind and Fire for links to a tradition ...  I'm not saying you couldn't, but ...  But preserve it they did, and praise the Lord, for otherwise it is extremely unlikely we would ever have heard songster Phineas Rockmore's Boll Weevil and Travelling Man or Smith Casey's delightful slide guitar or Pete Harris' stunning Jack of Diamonds.  Now Harris was some all-rounder!  His guitar style ranged from rudimentary on the aforementioned Buffalo Skinners and He Rambled (a version of The Derby Ram),

to banjo-like on the square dance Liza Jane, to scintillating on the Texas bottleneck favourite Diamonds, where he is up there with Blind Willie Johnson, whose style he has most certainly borrowed.  (sound clip)

Whilst its companion 'Black Appalachia' contains much fine music, it was poorly defined, and 'Black Texicans' works considerably better.  To say that this is historic material is obvious, but that does not imply that it is simply worthy.  Far from it - this is music that is vital and alive.  At times it is awe inspiring, at times humbling and, yes, at times even spooky.  Just like that eclipse.