This CD is a collection of field recordings made by John and Alan Lomax amongst others in the Thirties and Forties and compiled, some twenty years ago by Alan Lomax and Pete Lowry for a potential release designed to demonstrate the many and varied sources of the popular black musics 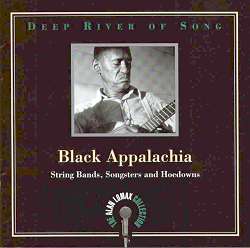 - blues and jazz - and their development and interaction with parallel white traditions.  Black Appalachia is a title more evocative than geographically accurate, as the material selected comes from an area from the Virginia Blue Ridge to the hill counties of Mississippi, though the main body is Tennessean.

However the intervening years since the album's conception have seen this previously ignored, yet vital, area fairly well explored.  Outstanding releases such as Altamont: Black Stringband Music (Rounder 237), Joe and Odelle Thompson: Old Time Music from the North Carolina Piedmont (Global Village 217) and only recently Black Banjo Songsters (Smithsonian Folkways 40079) are but a few among such a body of work.  The effect has been that the immediate impact of hearing Jimmie Strothers, a black Virginian convict knocking spots off of Cripple Creek on a 5 string banjo is not as mind-blowing as it might have been.  That said though, this is an outstanding release and the music (which after all is what you are paying for) is consistently fine.

Nothing here better confirms that before the blues (and after it for that matter) black and white traditions were inextricably linked than the recordings made in 1946 by Stuart Jamieson, Margaret Mayo and Freyda Simon.  On a visit, during a long summer field trip, to Jamieson's great aunt Oneida in Campaign, Tennesse, she arranged a visit by 'the best square dance band in five counties'.  It was not until shortly before their arrival that the visitors discovered that banjoist

Murphy Gribble, fiddler Albert Lusk and guitarist John York were black.  And Oneida was spot on - for theirs is fabulous, uplifting dance music.  As Lomax says, 'note the complex interlock of banjo and fiddle', (sound clip)

The music of Murphy Gribble's band is clearly and firmly in the mainstream of what we recognise as an Appalachian string band tradition that had evolved over two centuries - an Anglo-Irish pencil drawing coloured in by French, German, Native American and Black artists.  For an example of the latter, I feel comfortable in recommending the recordings by Sid Hemphill.  The son of a slave fiddler and aged 66 when recorded near Sledge, Mississippi in 1942, Hemphill was a blind, professional musician whose band performed at dances, picnics, circuses and in churches throughout the South.  (Lomax recorded him again in 1959 shortly before his death - and a family fife and drum band still perform to this day).  As Stephen Wade notes, Hemphill's music - ballads from both traditions, dance tunes and self composed local songs - link the older ante bellum traditions to the blues, while his hypnotic, almost trance-inducing fiddle accompaniment to the hick jokes of Arkansas Traveller (told with great relish) hint at an earlier, possibly African, source ... and I don't say that lightly.

Either way, I find it impossible to imagine that musicians such as he merely adopted and adapted a white musical tradition, but were in fact crucial to its development.  Listen to their 8th of January - it is desperately exciting.  (sound clip).

Likewise with the recordings of the Nashville Washboard Band, a group of street musicians discovered playing near to the Grand Ole Opry building.  Theopholis Stokes' phenomenal syncopation is clearly from no Western European tradition - even if as on the mandolin lead Soldier's Joy (joy indeed) it approximates a good step dancer - while their stirring Old Joe was a local tune recorded by Opry stalwarts Sid Harkreader and Dr Humphrey Bate, both of whom acknowledged black sources as early influences on their music.

There are three performances here featuring Sonny Terry.  Red Cross Store, sung by Brownie McGhee is more explicit in its social commentary than most versions of this song, and they are joined by Leadbelly for a version of the Leroy Carr standard How Long Blues.  And while Sonny's solo Careless Love is a blistering tour-de-force where voice and instrument become one a la Hemphill's pan-pipe version of Devil's Dream, I find these selections - along with the three seemingly obligatory worksongs - to be strangely out of place here.

No, go back and listen to Blind Pete and George Ryan, discovered by Leadbelly in the black section of Little Rock, Arkansas while travelling as driver and talent scout for John Lomax in September 1934.  Listen to their dazzling breakdown Black Bayou

where Blind Pete's fiddle plays Clayton McMichen to Ryan's Riley Puckett.  And listen to their version of Charley Patton's Banty Rooster Blues (sound clip).  Tony Russell has argued that this probably came from Patton's recording rather than Walter Rhodes' and while I agree, I suppose it is just possible that they got it from the great man himself, for Patton (who had died only five months before Blind Pete's recording) was known to have travelled Arkansas regularly.  Of course we will never know.

Overall then, a lovely and important collection - fine graphics, remarkably good sound and of course fascinating and invigorating music.  One final mention though about Stephen Wade's sleeve notes.  They are fast becoming a highlight of this entire Lomax series and if he seems, at times, as puzzled with the occasional selection as I am, his writing is always clear, concise, but above all, genuinely interesting.  Highly recommended.