Sponsored by Readers Digest and The Rockefeller Foundation amongst others, and directed by folklorist Nick Spitzer, Folk Masters was a series of concerts held between 1990 and 1996 at Carnegie Hall and Wolf Trap Farm outside Washington DC, showcasing a wide variety of traditional performers and groups and produced for public radio.  This is the second CD of the results that I have heard - the first being Folk Masters (Smithsonian Folkways 40047) released in 1993.  That collection, with some fine performances drawn from a bewildering array of traditions and styles was interesting enough but suffered somewhat from overly familiar track selection - Jazz (When the Saints), Gospel (This Little Light of Mine), Western Swing (Big Ball in Cowtown) etc. 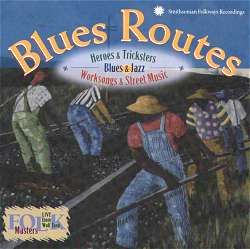 This offering, with Blues as its central theme but encompassing several offshoots and sources, is altogether more successful.

The opening track sets the scene perfectly for a trawl through some little known traditions and the chance to hear a few undeservedly obscure performers.  Five former railway workers from Alabama with ages ranging from 66 to 89 make up The Gandy Dancers who recreate the worksong tradition of laying railroad tracks that existed before World War 2 and mechanisation.  (Their name was inspired by Gandy Manufacturing of Chicago - the makers of the tools used in the proceedings.)  A string of floating verses, well known to Blues and Hillbilly enthusiasts - I got a gal in a whitefolk's yard / I thought I heard a chicken sneeze etc. - are accompanied by the group 'tamping' the rails.

Similar to the recreations of The Menhaden Chanteymen this is fascinating stuff and judging by the audience response visually impressive too.  (sound clip)

Equally archaic is one Abner Jay from Fitzgerald, Georgia, who late in his life was still touring the Southern countryside in his camper converted into a portable minstrel stage.  "I play banjo in an old cotton-picking style - real smooth, real quiet.  There's not a lot of fancy licks" we are informed.  I can confirm that and yet his performance of Bluetail Fly is strangely compelling.

Country Blues is well served here particularly from the rural East Coast Piedmont where the music seems to have hung on surprisingly strongly.  That fine guitarist Etta Baker performs her famous One Dime Blues in the rolling, ragtimey style associated with the region while John Cephas and Phil Wiggins' (overly?) dramatic reading of John Henry cannot disguise some masterly musicianship.  But the real highlight is the previously unheard Warner Williams.  From the same Washington DC/Piedmont tradition as Cephas and apparently with a John Jackson-like repertoire that encompassed Ernest Tubb alongsigside Blind Boy Fuller his Step it up and Go spotlights a very fine, if rather derivative performer.  (A CD by Williams is due on Folkways soon.)

Pre war styles are further showcased by two excellent pianists - Sammy Price, a veteran of the Dallas, Chicago and Kansas blues and jazz scene and the charismatic Booker T Laury from Memphis whose Early in the Morning is excellent.  On the subect of jazz there are performances by banjoist Don Vappie with the Creole Jazz Serenaders and the renowned fiddler Claude Williams.  Not understanding jazz, I cant judge, however.  Finally there is a track by Robert Junior Lockwood.  Lockwood was a major contributor through his work and recordings with Little Walter and Sonny Boy Williamson to the development of Post War blues and a stylish and innovative guitarist to boot, but the fact that he was the stepson of Robert Johnson has overshadowed this in recent years and many of his recreations of Johnson's work, though historically fascinating, have smacked more of duty than desire.  Here though his reworking of Little Queen of Spades is a fine performance containing as much student as teacher.

Solid, if unexceptional, contributions depict the two most important post war styles - Luther Johnson and Pinetop Perkins, both former Muddy Waters sidemen represent Chicago Blues while West Coast jump blues comes via T D Bell and Erbie Browser - but two very marginal traditions produce some of the collections most memorable moments.  I have always felt that recordings of New Orleans Mardi Gras Indians - such a visual phenomenon - were a bit like listening to football on the radio, but here the White Cloud Hunters really cook on a very exciting Sew Sew Sew while Rapper Dee and the Five Gallons of Fun are just that.

Their music is 'go-go', a unique creation of Washington's youth and is a highly syncopated fusion of funk, disco and rhythm & blues based on the music of local street bucket bands.  Blues no - exciting yes.  (sound clip)

But then to finish the set we return to the pure electric heavy pounding real thing.  Blues has had a considerable renascense among younger Afro Americans of late, be it the country blues, zydeco or more modern stylings.  But there is no-one better than Joe Louis Walker.  Still young, he is nonetheless well versed in West Coast Blues (he was born in San Francisco), gospel, soul and even psychedelia

and this blend is shown to barnstorming effect on eight minutes of stunning musicianship Bluesifyin.  This is music of the highest order - individual, imaginative and yet firmly in the tradition from which it sprung.  Definitely blues for the next century.  (sound clip)