As BB King winds down his busy schedule, Martin Scorsese seems to be taking over the job of contributing prefaces which say nothing much but might help to sell a few more copies. 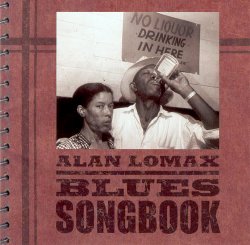 I leave it to readers to decide whether it’s a good thing that the public face and voice of the blues seem to be morphing from a Afro-Mississippian musician to an Italian-American film director.  A cynic might also wonder how long before his death it was that Alan Lomax made the transition from folklorist to brand name, and whether this two-CD Songbook is anything more than another way to sell blues in a declining market for CDs of all kinds.  However, I’m happy to report that the Blues Songbook is a lot more than that, and succeeds admirably in its aim of celebrating Alan Lomax’s achievements in blues field work between 1933 (although the first track included is from the following year) and 1978.

As indicated above, the selection also includes eight tracks recorded by John Lomax (sometimes assisted by his wife, Ruby Terrill) on field trips that the senior Lomax made without Alan; and Lead Belly’s Blind Lemon Blues comes from the 1934 expedition, on which 19-year old Alan was his father’s assistant.  The rationale behind the inclusion of these items is never spelled out explicitly in the notes, but apart from their intrinsic worth, they emphasise that John Lomax preceded his son as a collector of folk music, and continued to make valuable contributions after Alan struck out on his own.  Blind Willie McTell recorded more beautiful and enduring songs for John Lomax than Kill-it-Kid Rag, but it would be churlish to object to the inclusion of this example of McTell in cut-up mode.  (Other considerations apart, it means that Dying Crapshooter’s Blues, my least favourite McTell performance, doesn’t elbow its way in.)

That’s by the way; for readers who know the music, a look at the track listing does a good deal of the reviewer’s work for him.  It would be wrong to describe the Blues Songbook as a comprehensive account of the blues during the period it covers.  Alan Lomax’s attitude to recordings made with commercial motives varied from indifference to hostility, perspectives which sometimes did his understanding of the actual processes shaping black music no favours.  In this collection, for instance Chicago blues gets in by the skin of its teeth but it does so gloriously, in the shape of the Howlin’ Wolf band’s meaty rendition of Dust My Broom, recorded during (but not on-stage at) the 1966 Newport Folk Festival.  This is one of several tracks which derive from film or videotape footage, most of it commercially available, but described in the booklet as ‘previously unissued.’

There are some inevitable gaps, therefore, but the Songbook is still an extraordinarily wide-ranging collection, covering many styles and instruments, and taking in field hollers, dance music, virtuoso display pieces and the emotional depths plumbed by Rosalie Hemphill, Son House and others.  Vera Hall and Dock Reed’s duet is a religious song, whose manner demonstrates the overlaps of performance style that can occur between blues and gospel, and whose matter explicates the gulf between African-American secular and religious views of the world.  The two white musicians included, Dock Boggs and Hobart Smith, are perhaps the two with the deepest understanding of the blues, structurally, aesthetically and as a way of contemplating the world and humanity’s place in it; in Boggs’ case, especially, his music speaks both of and to suffering with a haunting eloquence.

Apart from fulfilling its historical and documentary roles admirably, the Blues Songbook is also exceptionally well programmed simply as entertainment.  The compilation ignores chronology, dodging freely about the decades and the map, and thereby achieving a fine blend of continuity and contrast.  This does mean that the notes on successive songs sometimes have to leap nimbly between very different aspects of both the music and the Lomaxes’ adventures in documenting it; but since the leaping is done by those eminent scholars John Cowley and David Evans, it’s accomplished very sure-footedly, and their comments are always historically and musically perceptive and enlightening.  Cowley also supplies a lengthy biography-cum-chronology, which is a great help in locating any particular track in the context of Lomax’s successive explorations of black music.

This essay makes it plain that Lomax approached his field work scientifically, with theories ready for testing, and plans in place for covering the ground as efficiently as possible within the constraints of time and budgets.  Some writers on blues still see Lomax as a sort of gentleman amateur, although they usually seem to visualise him, not as an heir of the 19th Century tradition, but as a forerunner of the fans who went looking in the early sixties for musicians they’d heard on 78s.  It’s still occasionally asserted, for instance, that the object of Lomax’s visit to Coahoma County in 1941 was to find Robert Johnson, when in fact he was there as part of an ambitious sociological survey, carried out jointly by the Library of Congress and Fisk University.  (In any case, Lomax must have known that Johnson was dead at least since the 1938 From Spirituals to Swing concert.)

That’s not to say that luck and chance never played their part in the research process, of course.  Take Cecil Augusta; he seems to have turned up at the beginning of a 1959 session with the Memphis Jug Band, recorded a fine Stop All the Buses, derived from Sonny Boy Williamson but accompanied by his own forward-looking guitar, and split.  (Lomax noted that he was 39, and from Williston, Tennessee.)  The version of the Memphis Jug Band that was recorded in 1959 included Charlie Burse and Will Shade from the line-ups that recorded in the twenties and thirties, but Kokomo (which is the first title ever issued from this session; what else is there?) is notable for a prominent electric guitar part.  This track is particularly valuable as documentation of the way that at least some of the jug band musicians in Memphis kept up with musical trends in an effort to retain their audience.  Burse, Shade and other jug band veterans made further recordings for researchers in the sixties; these performances were also tailored to their audience, but the tailoring was done by reverting to the styles heard on their vintage discs.

The tracks by Augusta and the Memphis Jug Band are among the comparatively few that will not be familiar to serious students of the blues.  The likes of Muddy Waters, Lead Belly, Son House and McTell may even be thought excessively familiar by now, but there’s no sensible way that they could be excluded from an overview such as this, either on historical or musical grounds, and the very adroit programming that I’ve already noted does a lot to mitigate the problem of déjŕ entendu.  The excellent sound restoration that’s been applied to the older material is also a help; the Songbook is, I think, the first opportunity to hear the 1938 recordings of Roll ’Em and Sweet Patootie Blues in decent sound, and many other vintage items have far more life and vibrancy than on previous reissues.  It’s a slightly irritating surprise, therefore, that there’s an intrusive tape hiss on Sam Chatmon’s performance from 1978!

That’s a minor gripe, though.  I’ve noted that Lomax brought various modes of scholarly enquiry to folk music, and that while doing so he recorded many masterpieces of popular expression; let me conclude by highlighting the three consecutive versions of Joe Turner, which between them exemplify both these aspects of his work.  The tracks by Ed Young, the Pratcher Brothers and Big Bill Broonzy demonstrate the evolution of both song and subject, respectively dealing with the historical Joe Turner, the ‘long chain man’ who transported convicts in the 1890s; the absent lover of adaptations by WC Handy and others (although for the Pratchers, the lyrics are much less functionally important than their stomping dance rhythms); and, in a song that Broonzy said he acquired from his uncle, the ‘mercy man’ who helps the poor in adversity.

Ed Young’s fife playing, accompanied by Hobart Smith’s fretless banjo, is the fruit of an attempt to recreate the conjectured sound of pre-Revolutionary African-American music.  Who knows if it’s anything like the real thing.  And - since it’s some of the most spectacularly beautiful vernacular music ever recorded - who cares?  For those like me who are sceptical, not without reason, of some of Big Bill Broonzy’s statements about the history of the blues, the interview after his song is a useful counterweight asked by Lomax "What are all the facts, if you know, about Joe Turner?"  Bill replies, "It’s no facts to know about that man, because he never was seen, same as John Henry and Frankie and Johnny and them people, and Casey Jones.  Nobody have no real proof on them people, nobody knows nothin’ about them folks; it’s just - I don’t know whether it’s fictitious, or just something people got up, or what.  But for me knowing about them people, I don’t know none of ’em."  How delightful that the speculative romanticism of the Young/Hobart collaboration was instigated by the scholar, and that the sober refusal to hypothesise comes from the blues singer!