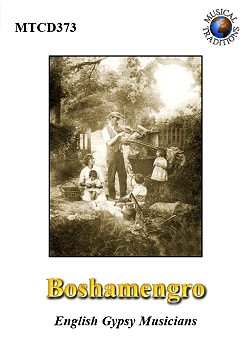 Here are 45 tracks of mainly short field recordings of Traveller musicians recorded between 1910 and 2006.  The repertoire is mainly traditional dance tunes of English, Scots and Irish origins: hornpipes, jigs and waltzes in the main, whose function was largely for step dancing.  Alongside this are some tunes of music hall and popular songs of yesteryear; the sort that everyone would have known for a good old sing-song in a pub or around the fire.  It is heady stuff; very different from the ways tunes are played in folk revival dance bands or in sessions and while the recording quality is far from perfect, for fans of authentic English style this is the real stuff.  Few of the tracks have been widely available before.

Eighty percent of the recordings are of three musicians.  Harry Lee's fiddle was recorded 'as far as we can tell' by Paul Carter, and Gwilym Davies recorded both Lemmy Brazil and Vanslow Smith and there is a great deal to learn from each of them.  The recordings of Lemmy are different from the ones of her on Topic.  Her playing manages to sound pretty sprightly despite the fact that she was 91 when the last of them was made.

Vanslow was recorded at an event at a school in Sussex (by chance I was there that day).  He is both the least known and most interesting of the musicians here playing both fiddle and melodeon.  In his hands the button box is less strident than it usually is but there is an enormous lift and danceability in his playing and his technique shows originality.

As always with MT releases the booklet (32 pages A5 sized) is of high quality and this time we have to thank Phil Heath-Coleman for this.  If this were a release of important recordings of traditional performers from some of the other countries represented on these review pages, then the booklet would carry the logos of the various public arts bodies that had been pleased to offer financial support to the project - but this is English, so it does not.