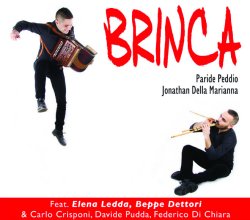 Since none of the booklet is in English, I'll have to refer to the Felmay website for information:

Brinca was conceived by Paride Peddio and Jonathan Della Marianna, two young Sardinian musicians from Desulo (Nuoro) and Escalaplano (Cagliari), who decided to undertake this project after a long-term cooperation.  Despite their young age, both are already virtuosos of their instruments, typical of Sardinian music: Paride on melodeon and Jonathan on launeddas and flutes.  The album contains ten traditional tracks, repurposed in an acoustic version; almost an hour of Sardinian folk music to listen to and especially dance to.

Brinca in Sardinian is the verb to jump.  Brinca is therefore an invitation to dance.  Each dance is reinterpreted in a new and original way, with arrangements that bring out the musicians' great talent.  Some musician friends of Paride and Jonathan, who the artists have been cooperating with for a while, were also involved in the project.  The voice parts were assigned to two young Sardinian folk artists: Carlo Crisponi, one of the most original performers of ballo cantato (dance accompanied by singing); Federico Di Chiara, an extremely versatile singer and a virtuoso on the harmonica.  The 'Sardinian' guitar is played by Davide Pudda, with his personal sound rich in phrasing, rhythm and harmonic scales typical of the canto in re (Song in D).  Brinca also features two exceptional guest appearances from Elena Ledda and Beppe Dettori.

“Brinca” is also meant to be a tribute to Paride and Jonathan's teachers and those who inspired them.  The melodeon player from Desulo dedicates the album to his grandfather Salvatore Peddio, a player known all over Sardinia as 'Bengasi'.  Jonathan thanks maestro Orlando Mascia for his teachings.

A few years ago, in Sardinia, I had the real privilege of hearing the two maestros of the launeddas and diatonic accordion, Luigi Lai and Totore Chessa playing together - it was magisterial!  Accordingly, looking at the cover of this CD, I was prepared to be rather less than overwhelmed by what I was about to hear.  I could have not been more wrong - it was just superb!

As well as a lot of hugely enjoyable ensemble playing, both Paride Peddio (diatonic accordion) Jonathan Della Marianna (launeddas) have a track or two more or less solo, and whilst it would be unrealstic to compare them with the mature maestro mentioned above, to my untutored ear they both handle their respective instruments brilliantly, particulrly Paride.  I should also mention that Jonathan also plays the sullittu, a simple reed-made flute, a 'primitive' instrument of the sort you would expect from central Sardinia’s sheperds, and the trunfa (jew's harp).

What Paride and Jonathan have put together here stands as the near equal to the wonderful Ritmia's force il mare LP of 1986 (see review).  As I said there: 'the music is folk songs and dance tunes out of the oral tradition, 're-proposed' by modern musicians for a modern audience - but there's not a hint of pop, rock, drum'n'bass, rap ... or whatever, to be heard.  Unsurprising, really, since - if the music's exciting to begin with - there's no need to add stuff to it in order to make it exciting!  Indeed, it's somewhat difficult to describe to you just what it was that they did to the music to make it appeal to modern ears, but appeal it does.'

Admittedly, Paride and Jonathan use a total of about ten musicians and singers as opposed to Ritmia's four but, to my ears, the result is just as exciting.  I don't think there's anything here which isn't completely traditional Sardinian, but I don't think you'd often hear all these instruments together in a traditional situation - except in the most wonderful session in the world!  Want to hear a bit?  Well, it'll have to be some excerpts as none of the tracks are much less than 5 minutes long, and (almost) everything is so good that it's hard to choose what to play you.  Bear in mind that any 60 second clip will not be half a impressive as the whole track would be.

Here's the start of Su Pippiu which has the advantage of including both the main participants on their chosen instrument.  The two young singers, Carlo Crisponi and Federico Di Chiara are both extremely good and, fortunately, there's a section in the final (very long) track, Po Paride, where they both sing, one after the other.

I said that '(almost) everything is so good' above - so I should say that I found track 9, A Diosa, deeply disappointing.  It's a slow number featuring the 'exceptional' (see above) Beppe Dettori, described as: 'a former singer of Tanca Ruja and Tazenda, is a “master of voice” who moves between pop and world music.'  Here he uses his 'pop' voice - more a 'croon' - which does nothing for me at all.  He also appears on track 3, but there he's multi-tracked into a chorus, so you don't notice so much!  Elena Ledda, the other 'exceptional guest appearance' makes a far better impression - in fact, I don't think I've heard her sing better (or more to my taste!).  Here she is on a snip from Ballittu Cantau.

But one disappointing track doesn't spoil a truly wonderful CD, and the new generation that the album represents - it's really important that the tradition continues in good hands.  You can get it direct from Felmay's website, or from Proper over here, and I swear that you won't be disappointed.