For the Sake of Days Gone By 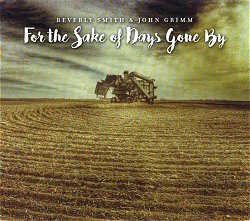 As the brief biographies on their website will tell you, Beverly Smith and John Grimm don't confine their musical activities to working with each other; they've both played in a number of bands, some of which even I, no great follower of revivalist outfits, have heard of.  Those who are interested can follow that electronic trail via the url above, where this CD can also be acquired.

Whatever their work in other contexts is like, For the Sake of Days Gone By is an very congenial collection.  Both musicians play - very adeptly in all instances - fiddle, mandolin and guitar, and Grimm also plays fretless banjo: heard on these 15 tracks are combinations of two fiddles, two guitars, guitar and mandolin (and vice versa), fiddle and banjo, and fiddle and mandolin.  The repertoire is a blend of material learned from recordings and in person, plus one original, Grimm's blues High and Dry, sung as a duet, and described as 'probably the first song he ever wrote that only has three chords!'  Thankfully, Grimm's inspiration on this composition comes from the white likes of Jimmie Rodgers and Cliff Carlisle; there's no attempt to replicate African American sounds or styles, and as a consequence it's firmly grounded in tradition, and very successful.

That comment applies to the disc as a whole, too.  Smith and Grimm are reviving, reinterpreting and preserving the music of bygone days, of course, but I don't want to make another contribution to the endless debate about what's is or isn't authentic, mainly because I see 'authenticity' as a slippery and not very useful way of judging music, usually worn as a badge proclaiming that the writer knows a lot about whatever's being discussed.  That Smith & Grimm's performances inhabit a different cultural world from their inspirations is a given; the important point about For the Sake of Days Gone By is that their accomplished playing and singing very successfully replicates - if I said 'inhabits', I'd perhaps be falling down the authenticity rabbit-hole - the sonic world from which the tunes have been time-travelled.

To say that is not to suggest that slavish reproduction is involved; the Carter Family's East Virginia Blues #2, from 1935 (and not a blues, as Smith & Grimm's title change perhaps intends to indicate), is arranged for mandolin and guitar.  Together with the harmony vocals, this shifts the song, very winningly, into the stylistic domain of the 'brother' duets who were beginning to flourish as the Carter Family cut their original version.

The programme is a mix of the archaic - especially on the twin fiddle, and the fiddle and banjo instrumentals - and more recent, more consciously constructed material, composed to be recorded: notable among the latter are My Old Pal of Yesterday, a Gene Autry and Jimmy Long duet from 1931, with a very polished two-guitar accompaniment, and the closing title track, derived from Jimmie Rodgers.  The most recent composition included seems to be Salvation Has Been Brought Down, which James and Martha Carson recorded in 1951; it's also the only sung item that hits a fast tempo.

This is where it's appropriate to inject the one reservation I have about For the Sake of Days Gone By, which is that too many of the vocal tracks come from the soft-centred tray in the old-time music chocolate box.  My wife, listening from the kitchen, thought the result was blandness, which is too harsh a verdict, but even the Singing Brakeman's number is a far cry from his 'rough and rowdy ways,' and Wilmer Watts and the Lonely Eagles' Bonnie Bess (whose father is an engineer, he runs the night express) is one of that wonderful band's few sentimental songs.  (Having said that, I should stress that it receives a delightfully sincere and winning rendition from Smith & Grimm.)

This may be a matter of the musicians wanting to stay in their comfort zone, although I notice that their other CD, The Sound of the Whip-Poor-Will, includes a version of Staggerlee; but whatever the reasons, I can't help feeling that a real train wreck, rather than the one that Bonnie Bess hopes God will protect her daddy from, or a badman ballad, or a (formerly) topical song would have offered some welcome variety.

This is a minor point, and not one that militates against a recommendation; on the contrary, this is one of the most enjoyable collections of old-time music that's come my way in a good while.  The mysterious, modal droning of the two fiddles on Young Edward, the skin-tight interplay of banjo and fiddle on Jaybird in a High Oak Tree, and the bounce of fiddle and mandolin on Burt Anderson are only three of the many good reasons to hear this collection.