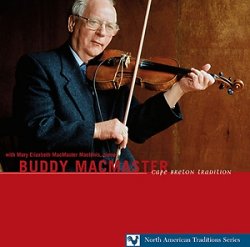 Buddy MacMaster must be regarded as a national treasure on Cape Breton Island.  His outstanding playing has been heard and respected in dance halls and concerts throughout Cape Breton, Nova Scotia and in his later life internationally.  This together with his extensive teaching, including several years of summer schools on Skye, have made him a big influence on players of Cape Breton music around the world.  This recording was made when Buddy was 78 in 2002, and he was in fine form.  As far as I know, he is still playing.

The Cape Breton fiddle tradition is rooted in the music brought by Gaelic-speaking Scottish immigrants in the early 19th century.  Although it is very much a Scottish music, the extreme isolation of the island meant that the the music was exposed to none of the influences of classical violin technique which affected {infected?} traditional fiddlers back in Scotland.  Buddy MacMaster's playing is firmly within the Cape Breton tradition, built around a long lifetime of regular playing for dances on the island.  He doesn't play so close to the bridge as many other Cape Breton fiddlers, nor is he as heavy-footed as some, including his niece Natalie.  As can be seen from the cover photo', he holds the fiddle in the typical Cape Breton manner; up high with the neck of the fiddle in the palm of his left hand, the wrist resting against the top edge of the instrument, and with the fiddle tilted forwards so that he is bowing almost vertically.  His repertoire is mainly from the dance hall, where long sets are the norm.  Several of the sets on this CD are quite long, although not long by Cape Breton standards where a set of ten reels would not be unusual for a dance.

Cape Breton Fiddle style tends to be driving, rhythmic and somewhat staccato, which must be a direct result of playing for dancing in the days before amplification.  It seems to me that it was always the fiddler who provided the rhythm, along with a loudly stamping foot.  Before cheap pianos became available, dances must have been driven by a solo fiddler, perhaps with a cello accompanying, so when cheap pianos came in, the rhythmic role was already taken care of.  Maybe this is why some piano accompanists nowadays seem almost to avoid playing on the rhythm.  They tend to the rippling and the jazzy.  On this recording the piano accompaniment is provided by Buddy's daughter Mary Elizabeth MacMaster MacInnis, whose approach is gentle, self-effacing, and pretty much on the rhythm.

This recording contains over 60 tunes on its 15 tracks, so it is only possible to highlight a few.  Buddy begins the CD as he means to go on, with Farewell to the Glen a stately march, followed by two reels Mr Dow / Mrs Dow where he really makes the fiddle 'growl'.  The track nicely illustrates a lot of the attractive features of Buddy's playing.  His intonation is good but there is nothing effete about his playing.  The way he segues from the march into the reels is seamless and deceptively simple.  An especially good example of this is the change from the strathspay Miller of Drone into the reel The Yetts of Muckart (track 4).  Another feature is the way he varies the volume of his playing within a tune.  This is a characteristic common to many Cape Breton Island fiddlers, and it is done here fairly subtly, but to great effect.  Most of the tracks are played with the fiddle in the standard GDAE tuning, but there is an older tradition on the island for other tunings, and on track 12 - Christy Campbell Strathspey / Bridge of Bamore / Marquis of Tullybardine / Margaree Reel he retuned to AEAE, known in the Cape Breton tradition as 'high bass' and the change in sound is very noticeable.

Buddy and his fellow fiddlers share the Scottish delight in playing sentimental slow airs.  For this recording, he chase a Scott Skinner tune Silverwells.  Not my taste, but played with great conviction.  However, there is a tangible sense of relief as he slips from that into the three strathspeys The Lass O'Corrie Mill / The Duchess of Buccleuch andThe Highlands of Banffshire.  These are interesting in that he plays the first two in a very grand Scottish style, and the third in a much more up-beat Cape Breton manner; they dance them quicker over there!  There are a lot of good jigs here too.  Moll in the Wad (track 3) is well-known, but still a great tune with an intriguing key-change in the second half, and Kathleen's Favourite (track 6) is a nice modal tune - I must learn them both!

The clogging tradition survives on Cape Breton whereas it died out Scotland, so there are a few suitable tunes included here.  The Real Thing / Upper Denton (track 9) are a couple of good hornpipes, especially the first one, and The Happy-Go-Lucky Clog is just glorious, with Buddy bowling it along with great panache, and showing no fear of those scary top Fs.  It is followed by two good American reels - Saratoga Hornpipe and Irish-American Reel.  The final set The Grey Seal's Lament for its Pup / Miss Ann Moir's Birthday / The Duke of Gordon's Birthday / London Lasses / West Mabou is a classic combination of slow air, two strathspeys and two reels, nicely rounding off the tracks.

The CD comes with a very informative insert booklet, with comprehensive notes on the tunes and sources, and a biography of Buddy.  It includes several photographs of the great man, even including one of his left hand.  It is probably fair to say that Buddy Macmaster's playing is at the easier-to-listen-to end of the scale in Cape Breton fiddling, but he is definitely the real thing.  If you are new to this tradition, this would be a good place to start, and if you are not, you will enjoy it and will probably want to learn some of the tunes.