Down in the Basement

Let's kick off with a statement of fact: Joe Bussard possesses the finest collection of American vernacular music on 78 r.p.m. shellac disc in the world.  Among collectors of such things (and I count myself as one of the little fishes in the pond) he is the head honcho. 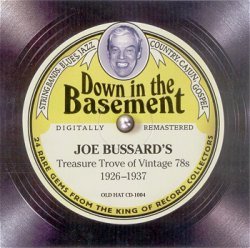 His generosity in sharing this treasure trove has enhanced many a reissue on vinyl, cassette and CD, from the classic album Fields Ward and His Buck Mountain Band - Early Country Music (Historical HLP 8001 - Bussard owns the only known test pressings, with the story of how he came by them recounted in this CD booklet), through the complete-in-chronological-order Document issues of pre-1950 blues and their ongoing old timey series (the complete Georgia Yellow Hammers is on the way), and on to the short-lived series of cassettes (soon to be available from this site in CD format) issued by Musical Traditions during its salad days in hardcopy format.  Articles about Bussard and his awesome collection have appeared before, but the current release offers perhaps the definitive statement, with memories of their initial encounter recounted by Marshall Wyatt, a man clearly swept up in Bussard's unstoppably-enthusiastic wake.  In common with all truly great collectors (of whatever persuasion), Bussard's passion intersects with obsession, opinionated frankness and fanaticism.  He uncompromisingly refers to himself in what, in other mouths, might be considered pejorative terms, and indeed both fosters and relishes that reputation.

His tales of acquiring the discs, as recounted here, are amusing, joyous and salutary in turn, exhibiting doggedness and resilience in equal measure.  Inevitably, luck has played a major part in the process, but the basic ground work of travelling around knocking on doors began at an early age (just before this reviewer was born, in fact).  Most record collectors have similar tales, though not necessarily those yielding such prolific and in many cases unique harvests.  Such stories have been a staple of the excellent 78 Quarterly magazine, and I have even recounted a few of my own in What record collectors do on their holidays.  Bussard's discovery of a balcony stacked with grime-covered 78s echoes my own experience in Portstewart, Co. Down, in 1987, when I found my first extensive cache of pre-1920 Scottish melodeon player discs, and could no more restrain my excitement than could Bussard in rural Virginia.

The twenty-four tracks featured here are about as good as these various genres get.  Within the Anglo-American instrumental tradition we hear Charles and Ira Stripling's double-stopped pizzicato Alabama fiddle and busy guitar duetting on the spectacular The Lost Child, the Ragtime-tinged Plow Boy Hop from the Grinnell Giggers out of Missouri, the densely-complex yet almost throwback sound of Tennessee's Weems String Band on Greenback Dollar, and that remarkable banjo solo of religious melodies by Uncle Dave Macon, effortlessly showcasing intricate and varied playing techniques from both the folk and parlour traditions.

Georgia's John Dilleshaw - Seven Foot Dilly himself - renders a snappy number filled with apocryphal Biblical imagery until the Noah's ark story dries up and he segués into more mundane couplets.  The conceit of 'No-ey and the Devil playing seven-up, the Devil win the ark, and No-ey wouldn't give it up' is a choice one.  The recording company issued this as The Old Ark's a' Moving, even though Dilly and his harmonist consistently sing 'No(ah)'s ark's a' moving.'  The Dixon Brothers tell of a then-recent tragedy in The School House Fire, set rather incongruously to the jaunty tune of Weaver's Life, which they recorded on that same 1937 day in Charlotte, North Carolina.  The gut-wrenching chorus 'You could hear those children screaming, while the flames were rolling high; daddy come and get your baby, will you stand and let it die?' has haunted me for decades.  One ought, perhaps, to applaud the inclusion of a Gene Autry item, a performer not particularly in favour among old time enthusiasts, and a nod towards Bussard's earliest musical fancy.  This 1931 track features Autry still firmly in his Jimmie Rodgers homage phase, proving once again that he could yodel with the best of them (except Roy Rogers and Montana Slim, of course).  His accompanist is Roy Smeck, a virtuoso on practically any fretted stringed instrument (tenor banjo in this instance), well-known on the vaudeville stage and, like Autry himself, destined for the silver screen within a few short years.

Give the World a Smile by the Corley family is a richly textured, staccato evangelical number which benefits from the presence of a young child (whether male or female isn't clear at this age).  There is little enough usage made of this rather appealing musical texturing within the commercially-recorded corpus - Asher Sizemore and Little Jimmie may have the highest such profile - but on the radio, a format where many performers in the old timey genre achieved their highest audience ratings, vocalising children were common enough, and the surviving transcriptions made for the medium as a substitute for live performance abound with them.  The Carter Family and Patsy Montana (and Sizemore pčre et fils again) spring most readily to mind.

African-American instrumentals include James Cole's Washboard Band's manic reinvention of the Tin Pan Alley tune Runnin' Wild (most often associated nowadays with the sexily-breathy Marilyn Monroe from the film Some Like it Hot); and one of the breakdown tunes which straddled the colour divide (and a personal favourite for over quarter of a century), Old Hen Cackle, performed by the truly inspired mandolin and guitar combo of Arthur McClain and Joe Evans, which sounds like a 45 r.p.m. recording played with the turntable set at double speed.  Just try dancing at that tempo for more than a few minutes at a time.

Big Bill Broonzy's How Do You Want it Done?, an extended sexual metaphor from one of his 1932 sessions, has him flat picking the solo strings of his guitar at great speed, in what is essentially a mandolin technique.  Gary (later Reverend Gary) Davis also employs this technique, among a multitude of others, on his tour-de-force 1935 'social tolerance or hellfire' exhortation You Got to Go Down, where he adopts the straining vocal mannerisms of numerous recorded Pentecostal preachers such as Reverends Nix and Gates.

Although three tracks are labelled 'blues' there's not a twelve bar to be heard.  The remarkable musically-dense Original Stack O'Lee Blues by the Downhome Boys, much reissued already from Bussard's unique copy (he claims to have turned down an offer of 30,000 dollars for it), dates from the earlier songster tradition; while the jazz-tinged, virtuoso slide guitar number Paddlin' Blues, the first recorded item by a man destined for a prolific post-Depression recording career as 'Kokomo' Arnold, was only half a dozen years young in 1930, concealing as it does the pop number Paddling Madeline Home, waxed with great success by such performers as Ukulele Ike.  The third, Easy Rider Blues, is a freeform slice of Louisiana Cajun soul-baring, in which fiddle, one-row melodeon and voice blend seamlessly to create a plaintive whole.  Amedé Ardoin and Dennis McGee recorded the form in greater quantity, but certainly with no greater emotional intensity than Leo Soileau and Mose Robin.

Luis Russell's Orchestra is present among the few jazz tracks, with a stellar roll call of New Orleans luminaries, among them the great clarinetist Albert Nicholas, who launches the number with a terrific solo.  Russell himself, featured on piano, was a New Orlean by adoption, but after relocating there in 1919 became fully integrated into the local musical scene, eventually embracing a stint with King Oliver.  The (New) Call of the Freaks is a song much beloved by later hokum and Western Swing combos, generally using some form of the 'garbage man' refrain as title.

The inclusion of a single track only caused me to scratch my head and say "Huh?"  Bessie Brown, who lies firmly within the sub-genre generically labelled 'the classic blues women,' is singularly unprepossessing, and even the accompaniment by such luminaries as Coleman Hawkins, Charlie Green and (maybe) Fletcher Henderson does little to lift this very far above the level of mere curiosity.  Even the CD note itself seems to be apologising for her.  But this is thankfully the only odd spot in an otherwise entirely wonderful collection.

Of course, this is unashamedly a sampler, and with pleasure we may note that practically every artist here can be heard more extensively elsewhere, though not necessarily in such good shape.  The sound quality on the majority of items is clear and crisp.  Least of all is a swishy Seven Foot Dilly track, and one wonders why another, cleaner number from his extensive output (MT issued a whole cassette) was not chosen.  Other than these few minor quibbles this is an outstanding production; joyous music, informative annotations, full discographical details, appropriate photos of record labels and sleeves, and amusing collecting anecdotes galore.  I could hardly recommend it more enthusiastically.  Order this excellent CD from P.O. Box 10309, Raleigh, North Carolina 27605, or go to the website - www.oldhatrecords.com   Do it now!