Got a Little Home to Go To 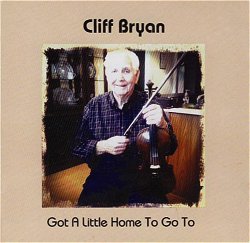 Thereís a dilemma that needs to be resolved when preparing a first recording by a traditional musican who has a repertoire that is both wide and rich, in tunes and variants.  On the one hand, itís manifestly important to document this repertoire and the ways in which the musician approaches it; on the other, you want to produce a collection that makes good listening, with performances that engage and delight the listener, not just a set of specimens for study.  The collection under review here treads the line between these two quite carefully, but generally successfully.  There are no fewer than 32 tracks, each featuring a single tune, so you can tick the box that registers a broad and thorough survey of Cliff Ryanís tunes.  The fact that these tracks are mostly under two minutes long, with only one breaking the three-minute mark, might suggest that the documentary aspect of the recording has perhaps taken precedence.  To be honest, it jars a little when the first track John Mullins' Tune, ends after not much more than a minute, just as your foot is really starting to tap, and youíre getting pulled into this unfamiliar tune and Bryanís beautiful playing of it.

Cliff Bryan was born in 1927 in Kansas City, Missouri, but grew up on a farm in rural Pomona, Mo. in the Ozarks region, where his familyís roots lay.  This is very fertile ground for fiddle music, as has been demonstrated by recordings dating from the 1920s right through - as recordings like this one testify - to the present day.  As Jim Nelsonís notes inform us: 'His diverse repertory includes pieces learned from local fiddlers, some rarely heard outside of the immediate locale in the Howell County area along the Arkansas border', as well as tunes learned from recordings and radio broadcasts.  Nelson lists some names of local players from whom Bryan learned his music, and singles out as a particular influence one Charlie Hiler, source both of versions of familiar tunes and unusual ones.  Plenty of good examples from across this range of sources are included here, including such fine tunes as, for example, Collins Two-Step, from Charlie Hiler, KC Stomp from Arthur Smithís 1940 Bluebird recording, through to Chickens Under the Back Porch from bluegrass fiddler Kenny Baker.  One of Nelsonís tune notes seems to me especially eloquent, in just a few words, about Bryanís distinctive engagement with his music: 'Cliff maintains that he learned this [Rachel] from Tommy Jacksonís early 1950s recording, although through the years he has subtly and creatively modified the melody'.  Whatever the source, Cliff Bryan plays his own music.

A quick calulation tells us that Bryan was 73 and 84 years old respectively at the the time of the three sessions (in 2000, recorded by Jim Nelson, and 2011, by Clinton Shurtz) that went towards the making of this collection.  A keener ear than mine might be able to detect which tracks were put down at each of these sessions, by the young 73-year old and the not quite so young 84-year old.  For my part, I can say that Cliff Bryan plays throughout with an energy, assurance and involvement that most younger fiddle players would envy very much indeed.  He is a terrific player, with a thoroughly assimilated technique, in a distinctive short-stroke style (as described by Jim Nelson), powerfully yet subtly rhythmic, making effective use of playing across strings to add both harmonic interest and drive, yet at the same time fully melodic, drawing the beauty out of the tunes, adding spice with a decoration or a variation here and there.  The collection ends with a version of Seneca Square Dance (here called Got a Little Home to Go To, but also known under various other titles), a comparatively simple tune from which the right player can evoke all sorts of atmosphere and expression, not to mention a sense of history and even narrative.  Bryanís reading of it is pretty straight, albeit characteristically his own, yet somehow manages all of these things.

Jim Nelson (who, it should be noted, also supports Bryan with his excellent guitar accompaniment throughout) concludes the introductory part of his notes by saying: 'Most importantly, though, Cliff continues to play every week with a group of musical friends in West Plains'.  If itís the reviewerís job to look a gift horse in the mouth, I might add that I would have loved to have heard some of that - maybe Cliff Bryan leading that group of musical friends through a longer performance, allowing us the immersion that you get from hearing a great tune played over and over with the subtle variations imparted by fine musicians, or given the dynamic lift of the changes in a well-constructed medley.  Thatís the closest I can come to carping about what is a beautiful and valuable collection of music.