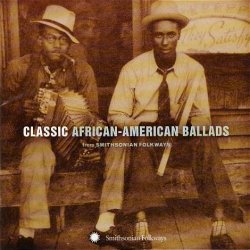 There are a dozen or so Smithsonian Folkways CDs with titles in the form Classic Such-and-such, and they've been appearing sporadically since 2002.  It's an obvious approach to transferring the back catalogue to CD, alongside the documenting of the big names - Leadbelly, Woody Guthrie, Big Bill Broonzy, Josh White, Terry & McGhee and so on - on one or more discs of their own.  The Classic series applies Folkways' usual high presentational standards, with extensive and scholarly notes, much-improved sound, and the inclusion of previously unreleased material.

Indeed, the most valuable aspect of Classic African-American Ballads is the introductory essay and song notes by Barry Lee Pearson; his overview is a well-informed and very clear discussion of the history and taxonomy of African-American ballads and, equally important, of the history of changes to scholarly understanding of the form of black ballads and the way that black ballad-making techniques and treatments differed from those of white singers.  (The white approach, inevitably, was long regarded as normative, and black ballads, with their less cohesive storylines, as a weak version of that, rather than as culturally distinct.)

Pearson perceptively notes that the ballads, especially those that came out of urban environments (and among which Stagolee is the pre-eminent example) celebrated violence, crime, 'saloon culture', and characters like those encountered in gangster rap.  Against that, however, one needs to set the suggestion that rap, which finds most of its audience among young whites, is a revival of the minstrel show, or even of the cartoonishly violent stereotypes of the turn-of-the-century coon song craze.  (On this aspect, see the African-American scholar Earnest Lamb's 'From Coon to Gangsta: The African-American Identity Crisis Represented in Popular Music' in Robert Springer, ed, The Lyrics in African-American Music [Bern, Peter Lang, 2001].)

I would have liked to have seen more discussion in the notes of why the ballad-making impulse apparently declined from about 1925 onwards, and where the black narrative song went as a result.  My short answers to complex questions: blues, which is relatively difficult to use to make narrative songs, became the dominant expressive form, in part because of the way the record industry channelled the creative energies of both recorded and unrecorded artists; and the making of narrative songs, whether about Roosevelt, Stalin or - more frequently - Bible characters and 'an old lady called mother' became to a considerable degree the preserve of gospel composers.  Equally, however, one shouldn't discount the importance of narrative blues like Memphis Minnie's Sylvester And His Mule Blues, which tells the true story of a farmer threatened with foreclosure, who got through on the phone to FDR.

What of the musical content of the CD?  Here Smithsonian Folkways are somewhat limited by only being able to draw on material in their own archives.  Moses Asch's black music catalogue was extensive, of course, and in addition there's music here from the Cook label (K C Douglas's unaccompanied Casey Jones) and from recent recordings by the Smithsonian and the National Council for the Traditional Arts; but there are still disquietingly many instances where the ballad may be classic, but the version presented is less so.

For instance, Pearson notes that Josh White 'had a personal tie' to Betty and Dupree, in that he knew Willie Walker, who recorded a Dupree Blues in 1930; but he slides past the fact that White's version has very little in common with Walker's, and is much less musically impressive.  White's text, in fact, comes from John & Alan Lomax's Our Singing Country (1941); the Lomaxes, seeking to produce what they deemed a 'best version', conflated a version by Walter Roberts of Florida with a version published by Odum and Johnson in Negro Workaday Songs (1926) and material from the poet Langston Hughes, 'who heard it in Cleveland.'

This transmission narrative (which is discussed in my articles on Betty and Dupree in Blues & Rhythm, issues 96 and 97) perhaps alters one's perception of the rootsiness of White's version.  Cephas & Wiggins' Stagolee is probably closer to folk sources in its acquisition, but not of much more than documentary value, thanks to Wiggins' habitual over-busy harmonica playing, which gets in the way of Cephas's delivery of the song's lyrics.

Without doing a track-by-track evaluation, it's worth pointing out that Josh White Jr, who performs in a similarly mannered, er, manner to his father, has none of the older man's charisma, and not much of his guitar skill.  For splendid guitar playing, look no further than John Jackson, recorded in 1997 at a 'live tribute to the Anthology of American Folk Music at the Barns of Wolf Trap, Vienna, Virginia.'  The recording information speaks volumes about how the contemporary occasions and audiences for this kind of music differ from those of the days when Railroad Bill and Louis Collins were originally composed and performed.  Also informative is the aurally self-evident fact that Jackson learned the latter song from one of John Hurt's recordings for presentation to white audiences; and since Hurt is the only black artist to have recorded Louis Collins until Jackson did so, one might question the song's importance in the corpus of African-American ballads.

The sense that Folkways are scratching around for material to fill the CD becomes acute when one encounters slight performances like Jazz Gillum's Race of the Jim Lee and the Katy Adam, with Memphis Slim's beefy, disruptive organ chords, or Bill Broonzy's rote-learned Frankie and Johnny, which Pearson admits is 'staid'; it descends from the Tin Pan Alley versions, minus even their facetious humour, rather than from the darker, nihilistic tradition exemplified by John Hurt and Charley Patton.

Still more unsatisfactory, both illustratively and artistically, are the tracks by the white deities of Folkways, Woody Guthrie (whose singing of Bad Lee Brown is truly lousy) and Dave Van Ronk, whose continuing réclame I find quite inexplicable.  I grant that he's an accomplished guitarist, but I simply cannot see how he or Guthrie can be taken seriously as vocal interpreters of black music.  The other white contribution, by Earl Taylor's bluegrass band, displays great technical ability, and not an iota of taste.  I'm not suggesting that there's no place for a consideration of how black ballads influenced white traditional singers (white revivalists is another matter); but it perhaps more usefully belongs on another CD.

The line between expounding the diversity of a musical genre and presenting a semi-random musical assortment is sometimes a hard one to walk; in this case of this collection, having to select from what's available has meant that Folkways are handicapped by the innate lack of quality of some of the material, and by abrupt stylistic changes between successive tracks.

In the other pan of the scale, though, it should be noted that in several cases the compilation selects good tracks from otherwise weak albums.  This applies to Sonny & Brownie's aggressive John Henry, to both the Pink Anderson items, and to Memphis Slim & Willie Dixon's remarkably successful transformation of Stewball from worksong into art song.  And of course, a number of tracks are simply enjoyable in their own right, like Leadbelly's John Hardy, learned from Woody Guthrie, but transformed by his mournfully swinging accordion, or Warner Williams' bouncy reworking of Froggie Went a-Courting.  As a whole, though, this CD will be very useful to teachers of African-American Studies programmes, but of lesser appeal to anyone who wants to be entertained as well as informed.