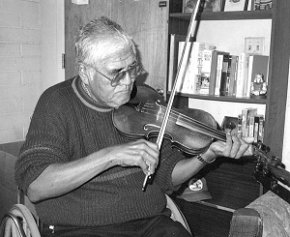 In 1989, Bayou Seco went to Arizona in search of Elliott and found the Pascola dancers near San Simon, just missing Elliott.  It was not until the next summer, at the Festival of American Fiddle Tunes in Port Townsend, WA, that everyone met Elliott and his band, the Gu-achi Fiddlers.  There a group of eager musicians began to learn the tunes and the duo fiddle style of Elliott and Lester.  Over the next three years there were eight visits to the reservation to learn the tunes and the unique harmonies and hear the stories that Elliott and his family shared. 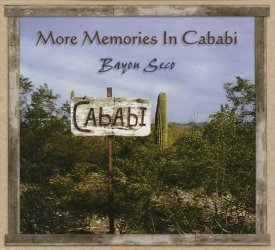 Well, Elliott Johnson died in 1993 and the Gu-achi Fiddlers are no more - but in 1995, Bayou Seco recorded their own cassette of some of the tunes as Memories in Cabai (Ubik 27), to make this fabulous music more widely available.  Now they have recorded and included an additional eleven tunes for this new CD version.

Bayou Seco, as you may know, are a whole series of bands large and small, but at the centre are always Jeanie McLerie and Ken Keppeler.  In this present incarnation they are: Ken and Jeanie - fiddles, Scott Mathis - mandolin, Linda Askew - guitar, Jefferson Voorhees - drums, together with Elizabeth Neely, Emily Abbink, Paul, Rafael, and Benny Rangell.

To give you an idea of the feeling of this CD, I can do no better than to quote at length from the notes:

It's nearly impossible to play the tunes we learned from Elliott Johnson without conjuring up the images of the Sonora Desert and Elliott's home in the village of Cababi, AZ.  We were drawn in by the sight of those large and looming saguaro cacti of all kinds of shapes, and the smells of the mesquite and cooking stoves.  Though the need to be still during those hot dry days was overwhelming, the desire to learn those uplifting Tohono O'odham (the desert people) tunes at night kept us there until, under the cool Milky Way that shone so clearly in that remote desert, we took in the feelings, music, sounds and ancient spirits, learning as much as we possibly could from Elliott.  Those astonishing tune sessions took place sitting outside in the "ramada" formed by the ocotillo cactus fence, each spiny stalk standing tall and wired together, enclosing us in a small space in the vastness ...

We were captivated by the odd lengths and measures of the tunes, and the loveliness of the harmonies that so seemed to match the environment.  Though harkening back to music from earlier centuries and from across the ocean, the twists and turns of conquest, and a red chile stew of cultural dreams and nightmares, had made the music seem less familiar to us ... There were those who stood in the shadows of night, tapping their toes as they listened to the tunes of their youth, almost lost forever, as played in the old style as Elliott had learned them from his Uncle Charlie Johnson, the Ajo Orchestra and others ...

We'd return to Cababi and, at each visit, play what we had learned previously, and Elliott would correct our mistakes, sometimes showing us another harmony.  He used to say there were five harmonies for each tune.  Each visit filled us with memories and enriched our souls.  We had become students of so much more than the music.

And, somehow, so much more than the music has magic-ed its way onto this 21st century CD.  If there were only Elliott Johnson's wonderful tunes and those awesome harmonies to be found here, the record would be an essential purchace ... but just one listen will tell you that Ken and Jeanie have got it right, and that something of the spirit of Cababi is to be found here, too.

Through the efforts of Bayou Seco and their friends, several of these tunes have become widely-known in descerning musical circles over the years -

Santa Rosa Processional, Sonora Church 2-step, Peanut Shoes, Purple Lilies ...  But here's the opportunity of hearing 26 of them, superbly played and well recorded.  Obviously, there's not space to give you details of them all, but here are sound clips of a couple of very different tunes I don't think I'd encountered before, and which I really like: Second Time in San Xavier (left) and Rosalia (right).

On the back cover of the CD, Bayou Seco say 'We dedicate it to all who will play these tunes and keep them alive.'  Amen to that - and so, since this lovely record is not easily available in the UK, I've been more than pleased to include it among the select group of other such CDs on the Musical Traditions website, where it's available for just Ł12.00.