Cajun Music was discovered late in the day by America's record industry.  Doubtless the inaccessibilty of the region - Southwest Louisiana and isolated pockets of Alabama and South East Texas - and its small and almost entirely rural population, unique language and the music's lack of obvious 'crossover' appeal could not have offered great commercial appeal to the record companies executives. 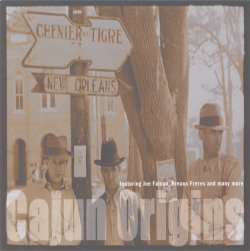 So when a trio of Cajun musicians turn up at a recording session in April 1928 and the singer clams-up through stage fright, you could reasonably have expected the Columbia guys to say "To Hell with it!" and pack their equipment away.

"Well the one supposed to sing Allons a Lafayette was a man by the name of Leon Meche from Bosco.  He got all ready and buttoned up his coat and this and that, and he was getting pale as a sheet, and he looked at me and said "You better sing it yourself, I might make a mistake."  So I took over."  (Joe Falcon interview.  July 1965.)

Unwilling to record a duo, Joe on accordian and his guitar-playing wife Cleoma, the engineers finally relented (various, probably apochryphal, stories mention Joe's manager, George Burr, a bundle of dollars and or a pistol) and firstly La valse qui ma partin de ma fose (the waltz that carried me to my grave) and then Lafayette were committed to wax.

And thank Heaven for it, for this inauspicious start was to open the door for the preservation of some of the most magnificent music recorded in pre-war America.  And Catfish Records here present 20 examples from this inspiring legacy, including Joe's first two efforts, on this absolutely blistering CD. (sound clip - Allons a Lafayette)

Now after all that, it might sound a bit like heresy, but I must confess that I have always found these two tracks to be rather ponderous affairs (dull is maybe a bit too strong).  But on this revisit, and given a wider sampling here, I now see this as unfair.  Poche Town is an excellent performance with a strong vocal and fine accordeon, as is Quand Je Suis Partis pour le Texas while Aimer el Perdre adds an effective triangle to the accompaniment behind Falcon's tortured vocal.  Several tracks from his recorded legacy (46 sides) are scattered around a number of compilations but much is not, particularly his later Deccas, so maybe the time is now right for a more in depth reissue programme of this important performer.

Fortunately my initial view on Falcon's earliest efforts was not shared by his audience back home for quite literally the record was a sensation, selling in large numbers and was still in catalogue (as a 45) as late as 1970.  Newspaper reports of the time describe dances where 2 - 3000 people turned up to see and hear the 'The Famous Columbia Record King'.  At such events he was invariably accompanied by Cleoma.  A woman performing music publicly was a novelty in itself but in an often volatile environment where dancing and drinking were carried out in poorly ventilated halls and where the musicians performed on a raised platform protected by a chicken wire screen, this smacks of folly, or devotion beyond the call of duty.

"A beautiful little woman with black frizzy hair, black, black eyes and white, white skin.  Joe Falcon was lucky to have her." was fiddler Dennis McGee's descripton of Cleoma and her vocal talents found expression on 24 sides under her own maiden and married names recorded between 1928 and 1937.  Here she is represented by her first recording the waltz Marie Buller, and a fine performance it is too.

Joe had met and courted Cleoma Breaux on his frequent visits to her musical brothers Amedee, Ophy and Clifford.  All three were multi-instrumentalists, each adept on the accordeon, violin and guitar and performed extensively, if occassionally acrimoniously as 'Les Breaux Freres'.  Amedee and Ophy accompanied Joe and Cleoma to the Falcons' third recording session in Atlanta in April 1929 and it was at this session that Amedee was to make what many see as his greatest contribution to the music.

His debut track Ma Blonde est Partie (sound clip), reputedly written by Cleoma about one of Amedee's former wives has, as Jolie Blon, become possibly the best known of all Cajun songs and a firm favourite with performers and audiences to this day.

These brothers really do perform top drawer music and family bands as we know are at the very crux of much traditional music and the Seguras of Delcambre were but one of scores operating in South Louisiana.  Dewey Segura was one of twelve children (their father was of Spanish origin, their mother French) most of whom played music to some extent.  Born in 1902 he learned the rudiments as a child on one of his elder sisters' accordeons and by his early teens was playing regularly at local dances organised by their father.  This pastime, combined with a career as a bootlegger, continued into the Twenties and in 1928 he arranged a recording session with his brother Eddie on vocals and triangle with Columbia Records in New Orleans.  It was this session that was to produce the song by which he is understandably best known today - A Mosquito Ate up my Sweetheart!  Sadly this is not reproduced here but we have instead two very simple but effective bluesy tracks Rosalia and Far Away from Home Blues where he is accompanied by one Didier Hebert (best known for his appearance in the Harry Smith Anthology) on guitar.

Like Amedee Breaux, with whom Segura played often, Dewey was recorded by the Library of Congress.  Breaux had been recorded in 1934 by the Lomaxes as had one of Dewey's brothers, either Ed or Joe.  Dewey recorded for Richard Spottswood of the Library in 1975 as did the great fiddler Dennis McGee, unquestionably one of the very finest traditional musicians America produced in the last century.  It is a glaring ommission of this collection that nothing from McGee's own extensive pre-War recorded legacy is presented here, but we are priviledged to hear him accompany an equally great musician Amedee Ardoin.

Raised near Basile, the great grandson of a slave, Ardoin was for many years the foremost Cajun musician in South West Louisiana, respected and admired by whites and blacks alike.  Preferring to play the better paid white dances, often in the company of McGee, his unique accordeon playing and vocal power and range promoted him to a social status that few colored men of his day could have possibly attained.

"We played at Kaplan, at Bayou Noir, Lake Charles, everywhere.  Everybody went crazy when Amedee played.  Oh I loved that little guy's music ...  He had a song he'd cry out in - it would make me shake when he'd take to singing it."  (Dennis McGee interview, 1975)

Although one of very few black Cajun musicians to record commercially until Clifton Chenier, Ardoin left behind nearly three dozen sides and the two titles here - Madam Atchen (sound clip) and Two Step de Prairie Soleau come from his first session held in New Orleans in 1929.  The interplay with McGee is awesome although Dennis never felt that the recordings truly conveyed the full power of their music.

Despite his tragic death in 1941 - brought on by a brutal beating inflicted by outsiders attending a dance who objected to him using a hankerchief offered by a local white girl to wipe his brow - his legacy survives to this day.  His nephew, the much admired 'Bois Sec' Ardoin still plays regularly although approaching ninety, while Bois Sec's grandson Chris leads Double Clutchin', one of the hottest young Zydeco bands on the circuit.

Blues is a shared tradition between Cajun musicians on both sides of the racial divide and nowhere is this more evident than on the two recordings by Mayuse Lafleur and Leo Soileau.  Lafleur's clear high pitched vocals are haunting on the waltz Basile and the stunning Mama, Where You At (later to become the Cajun standard Hey Mom) and are no less blues than anything Ardoin recorded.  This song was issued just eight days after Falcon's historic Lafayette although recorded some six months later, but Lafleur, an accordeonist and contemporary of Falcon and Amedee Breaux, was never to see a copy - having been gunned down in a barroom brawl nine days after committing it to wax.  His fiddle playing partner Soileau, born in 1904 in Ville Platte was an early student of Dennis McGee, ten years his senior, and his influence can be readily detected on these two lovely pieces.

The Depression years of the early Thirties put an end to the recording careers of countless traditional musicians in America.  But while many faded into the obscurity of playing for friends, family and small local dances, Soileau was to assimilate the bright new sounds of the mid-Thirties - notably Western Swing, then blasting forth from Texas radio stations - into a Cajun format with great success.  His bands, The Rhythm Boys and the Four Aces, now augmented by steel guitars, pianos and drums were immensely popular, except with maybe the disenchanted traditionalists, and recorded about a hundred sides between 1935 and 1937 while also performing for countless dances and radio broadcasts up to the end of World War II.

A similar band The Hackberry Ramblers are captured here in full flow giving a good indication of things to come.  Formed by fiddler Luderin Darbon in 1930 and the first Cajun band to use amplification, they favoured pop and hillbilly tunes, but could easily knock out a French tune when required such as Mermentan Stomp (sound clip) from 1936.  Although Cajun in feel and language I tend to think that the fiddling owes much to the very popular Mississippi fiddler William Narmour whose quirly,

driving style I hear in a lot of contemporary Deep South (Miss., Louisiana Alabama) string band music of that day.  Their other number though Une Pias Ici et Una Pias la Bas (sound clip) is pure Cajun Swing and typifies the music that would pervade Louisiana until the Fifties and the return of the accordeon in the hands of Iry LeJune.

Catfish, an English label better known for some exemplary early Post War Chicago Blues reissues, are to be congratulated, for this is a magnificent collection that has inspired me to dig out all those wonderful old Flyright and Old Timey LPs which have been idly sitting on my shelves for far too long.  It has a few nice vintage photos, excellent sound quality and brief but useful notes.  Am I too hopeful to think it's the first in a comprehesive series devoted to the reissuing of the delights of a great great music?

Available from Red Lick at http://www.redlick.com