Anyone interested in pre-war blues recordings will know that the market is currently awash with literally hundreds of very cheap CDs regurgitating the same material over and over again.  The price of some of these collections beggars belief: 24 tracks by Blind Willie McTell for Ł1.85; Sleepy John Estes for Ł2.00; the complete pre- war commercial output of Bukka White for Ł2.50.  We are talking 'crown jewels' here and these are not second hand or deleted stock but brand new issues.  Now I can only guess that to make any profit (and why do it otherwise?) these companies skimp on presentation, minimal notes if any and cheap graphics, and that the recordings, well out of copyright, have simply been lifted from a previous CD issue.  Flippin' heck, even a Luddite like myself could accomplish that in my living room!

So why should I give a damn?  Everyone now has the opportunity to build a fabulous collection for a pittance and life is sweet.  Well up to a point that is true, but my one main concern is that no detrimental effects result for those companies such as Yazoo, Old Hat, Arhoolie and Rounder who invest vast amounts of time, money and care in 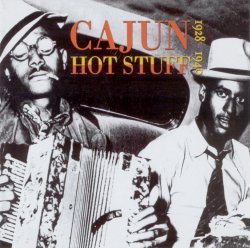 assembling original discs in order to obtain the best quality sound reproduction and thoroughly research their subject in order to produce superb documentation and charge a reasonable price as a result only to have their efforts ripped off by 'fly by night' Del-Boys just in it for a quick buck.

Whether Acrobat fall into that category or not I do not know (they sell at Ł4.50 which I would guess is in the mid price range) and their catalogue certainly shows some very imaginative releases of hitherto unreissued material, particularly blues from the immediate post-war period and a willingness to branch out into less fashionable musics other than blues, as with this collection of pre-war Cajun music.  Admittedly the notes, surprisingly from the highly regarded Neil Slaven, are not particularly informative, but lo and behold there is a discography of sorts, but I am still biting my tongue on that thorny subject.

However the real drawback here, and it is a big one, is the sound reproduction.  Now I should tell you that some of the original recordings reproduced here, particularly the earlier ones, are so rare as to barely exist!  But is there any snap, crackle or pop anywhere to be heard?  No there is not, except - surprisingly - between the tracks.  So it is obvious that a noise reduction system has been used as is now commonplace with virtually all reissue collections, but here it sounds as though it has been used so heavily as to distort the music to an alarming degree.  Difficult to put into words but the adjective 'swirling' springs to mind.  Sadly this renders some instruments virtually inaudible and elsewhere guitars sounding like banjos and fiddles like harmonicas.  This is a great shame because the music (much of it was issued in a series of 3 CDs put out by the Country Music Foundation in 1990) is actually superb and is unlikely to appear again in better shape for some time.

18 months ago I reviewed a CD Cajun Origins on the Catfish label (I hope anyone who wanted it ordered their copy then as it is now deleted and Catfish appear no longer to be operational in the reissue field) and this collection covers similiar ground from pioneer rural musicians through the early Cajun string bands up to the Western Swing influenced outfits of the Forties.

My comments on the sound quality notwithstanding, it is just possible to sit and listen and enjoy this CD and in particular, for me at least, the seven early tracks (1928-29) which are stunning.  Leo Soileau and Mayuse La Fleur's Mama Where You At (also on the Catfish) is probably the highlight and Arteleus Mistric's Belle of Point Clare whose vocal is accompanied only by his own harmonica certainly the most unusual.  But it is the four duet recordings made in New Orleans in November 1929 where, if you do not have the CMFs, some new and interesting music is to be heard - simple, fresh and joyful music of the highest order.  It is easy to forget just how young many of these pioneer recording artists actually were, but listen to Delin T Guillory and Lewis LaFleur's two tracks for raw excitement, Berthemost Montet and Joswell Dupuis' L'Abandoner, with more than a hint of Amede Ardoin in the vocal, or Oscar Doucet and Alius Soileau (see what I mean about obscurity!) on the superbly infectious Oh Bebe to hear the excitement of youth combine with the majesty of tradition to create genuine musical magic.

The remainder of the CD is largely devoted to Thirties recordings of string band music and heavily blues-drenched music at that.  Floyd Shreve's name pops up all over the place and his track with his Three Aces (fiddle courtesy of Leo Soileau) is an extremely competent Jimmie Rodgers influenced Lonesome Blues.  The Hackberry Ramblers' landmark recording of Jolie Blonde and the Rayne-Bo Ramblers' reprise of Cleoma Falcon's Marie Buller are excellent recordings, as are Joe Werner's Crap Shooters Hop (sung in English) and Millers Merrymakers Lake Arthur Stomp with J B Fusilier on fiddle and the wonderfully named Beethoven Miller on guitar.  But for me the pick of this period is accordionist Lawrence Walker breathing new life into an old warhorse Alberta.

The collection is rounded off nicely with three tracks where a distinct Western Swing influence can be detected.  The Hackberry Ramblers' Et La Bas has great hot fiddle from Luderin Darbonne, while on Je Va t'Aimer, Floyd Shreve joins him in an effective vocal duet.  Finally from this period comes Happy Fats and the Rayne-Bo Ramblers' 1940 recording of La Veuve De La Coulee, featuring a very young Harry Choates on fiddle, which gives some indication of the influence he would exert over the next decade.

I really wish that I could recommend this CD more enthusiastically, for the music is of the highest order - but that sound quality is a real problem.  Still, at Ł4.50 I guess it's not too great a gamble.