Classic Blues Artwork from the 1920s

“She says Daddy you talk right funny.
Why don’t you open up your eyes and see.
That ain’t nothin’ but a calendar,
With a give-away for free CD.”

Apologies to the late Sonny Boy Williamson and the even later F J Child.  But as Sonny Boy might have gone on to say, ‘I bin all over the world, to the Gulf of Mexico.  Ain’t never been asked to review no calendar before’.

Well, I have now, and I am here to tell you that this one is eminently reviewable.  Indeed, its significance is such that it calls for nothing less than the finely crafted, fair minded and painstaking critique, which makes this magazine a byword for quality, wherever unprejudiced opinion is allowed to flourish.  It is a collection of rare Paramount Records posters; the ones which used to advertise Charley Patton and Son House and Ma Rainey, and all the other good people who graced the studios of that unhappily managed establishment.

I am a sucker for old blues posters.  That’s not just because of the evocative illustrations, which often showed how little the race records industry knew about the idiom in which they worked; but also for the ludicrously florid advertising spiels which went with them.

But am I enough of a sucker to lay out the asking price of fourteen dollars and ninety-five cents on this calendar, when I could get one showing cats or steam trains or those intrepid ladies of Rylstone Women’s Institute, for less than half that price?  In fact the cost is only one of a number of pros and cons which I need to tell you about.  On the pro side, this material is historically important and aesthetically pleasing.  There are twelve posters, but only eleven illustrations, and their significance lies in the fact that most have not been seen since the demise of Paramount in 1933.  Thus, they are a considerable augmentation to the small number of Paramount adverts which we already knew about.  Moreover, as far as the standard of reproduction is concerned, we are dealing with state of the art artwork.  Where the earlier discoveries were taken from adverts in The Chicago Defender newspaper, these are copied from distribution posters.  They are large reproductions - 30cm by 30cm - and they have been beautifully enhanced, so that the clarity is first class.  In short this is a sumptuous production, and one you’ll want to hang on to long after 2004 done bin here and gone.

It has the usual anniversary dates for Christmas, Easter etc, and there are anniversaries for blues singers and other black luminaries, such as Martin Luther King and Frederick Douglass.  Brief artist biographies are included and there is an introduction from John Tefteller, the calendar’s producer.  It’s with this latter piece that the cons start to kick in.

First of all, we are told that the posters are part of a huge haul of Paramount promotional material, which was rescued from the rubbish tip some twenty years ago by a pair of journalists.  These gentlemen appear to have had little interest in blues, and they did nothing with their find until it was passed on to Mr Tefteller in 2002.  Given the scarcity of the stuff, it is a pity that they sat on it for so long.  Anyway, the plan now seems to be to release the posters in calendar form over the next few years.  But somehow I don’t think this is quite the way to return them to the public domain.  I’d have thought it more appropriate if all this ephemera could be gathered together in book form.

Incidentally, Mr Tefteller seems to think that those earlier Paramount adverts I mentioned were first brought to the notice of blues specialists in the 1960s. 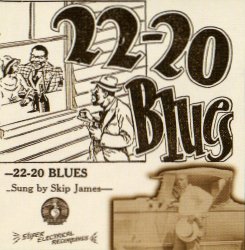 This, via the researches of Max Vreede.  In fact a few adverts were in circulation well before then, and a number of them appear in Paul Oliver’s Blues Fell This Morning, published in 1960.  Oliver’s book contains no acknowledgement to Mr Vreede.

Secondly, the present publishers have retouched some of these posters, and that worries me.  We are dealing almost with the blues equivalent of the Dead Sea Scrolls, and it would have been helpful if Blues Images had told us what changes they’d made.  For instance, all but one of the posters includes a photograph of the artist/s and there is no indication as to whether these were inserted by Paramount.  I suspect that at least three of them weren’t, for the credits acknowledge the use of two photographs, one each for Skip James and Rambling Thomas.

I am also doubtful about the poster for Charley Patton’s Dirt Road Blues.  A large copy of this was included in Revenant’s Patton tribute; Screamin’ and Hollerin’ The Blues, and the two make an interesting comparison.  The present one is much more distinct and contains many lines and other points of detail, which cannot be seen in the Revenant.  That may be because Revenant’s is a newspaper copy, where the Blues Images’ isn’t.  However, only the Blues Images version includes a photograph of Patton.  Was the photograph omitted from the newspaper, or did Blues Images superimpose it?

By the way, I mentioned the fact that these twelve posters have only eleven illustrations. 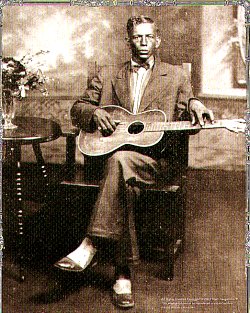 That is because Paramount used the same drawing for the posters both of Charley Patton and of Son House.  They merely turned one of them round.

2  Also, the Patton photograph I mentioned is described by Blues Images as being previously undiscovered.  I find it a bit of an oddball.  First of all, it looks to me as though it is not entirely undiscovered.  The present image is a lot clearer, but it appears to be a full length version of the famous head and shoulders shot, which adorns Patton products everywhere.  Secondly, I’m intrigued by the way he is holding the guitar.  Granted this is a posed photograph, but his chording hand is upside down.  I don’t recall the topic coming up in any discussion of Patton, but I wonder if it’s possible that he sometimes played it that way in real life.

My final reservation reiterates something raised by the introduction; namely the question of Black alienation from this kind of artwork.  I can well understand why Black people would feel offended at caricatures of their ancestors.  Indeed, you don’t have to go back much before the Paramount era to find that Punch, a fairly liberal British magazine, was running even more offensive caricatures of my Irish forebears.  However, the offence lies not with the illustrations, for they are merely products of their time and age.  Rather, it lies with the contemporary significance of racial discrimination, and the meanings which we read into the illustrations as a consequence.  It lies with the fact that, generations after these things were published, people can still be humiliated for the colour of their skin, or for their accent.  I look forward to the day when racism is exposed as nothing more than ignorant gobbledygook, when we can accept each other as people pure and simple, and we can enjoy these illustrations as simply the relics of a vanished age.

Let’s look at the CD.  It has fifteen tracks, the first twelve of which accompany the posters.  There is nothing remarkable about the selection and serious blues collectors will have many of them already.  Even so, I suppose it’s nice to play the record while you look at the poster.  However the remaining three are much rarer.  Two have never been released at all, while the third has never seen publication since its original pressing.  When I tell you that one of the first two is a Tommy Johnson audition track, you may feel there is a need to avoid getting caught in the crush.  I can’t say I liked it very much and it puts me at a slight disadvantage, because there is a hole in my record collection where several Tommy Johnson Paramounts supposed to.

That is an awful thing for a blues critic to admit, but the need to eat does occasionally take priority over my record buying.  Nevertheless, even allowing for Johnson’s deteriorating vocal abilities by the time he got to Paramount, this cut sounds vastly inferior to everything else I’ve heard from him.  It also sounds completely different to his earlier recordings for Victor.  Indeed, the vocal tone, the guitar style, even the melody and the sentiments of the lyrics, put me in mind of another Mississippi Victor artiste; Jimmie Rodgers.  Moreover, the amount of repetition and humming that’s going on make me think that he wasn’t too familiar with the words.  And this is the first pre-world war two blues record I can ever recall hearing which comes with its very own fade out.  It is all very puzzling, but the other two rarities, from Blind Joe Reynolds and King Solomon Hill, are much better and will probably absorb listeners far more.

Right now though I’m absorbed in the problem of how to erect this weighty artefact and keep it up for a whole year!  Bessie Smith’s Kitchen Man could have done it standing on his head.  So could Ma Rainey’s Titanic Man, while Arthur “Big Boy” Crudup sounds as though he was made for the job.  Those of us who are less extravagantly endowed, however, will just have to settle for a hammer, a wall and a good stout nail.  Whatever you use, make sure you secure it properly, or you could end up repeating those celebrated lines of Charley Patton’s.