These are another two in the series of themed compilations derived from the original LPs released on Folkways Records between the 1940s and the 1980s (see other reviews in MT of Classic African-American Ballads, Classic Railroad Songs and Classic Southern Gospel).  As previously mentioned, many of the original LPs are now available on CD, in a press-on-demand arrangement, via the Smithsonian Folkways website, but for the more general listener, compilations such as these might have a broader appeal.  They certainly cast their nets quite widely. 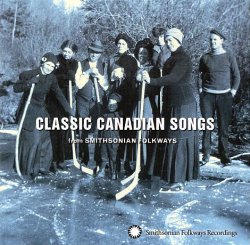 Despite the title, Classic Canadian Songs includes both songs and instrumental dance tunes, and the latter provides what is probably its most impressive moment, the Quebecois Jean Carignan's brilliant rendition of Lord MacDonald's Reel, played with such virtuosity that it's quite staggering to realise that the percussion accompaniment is provided by the fact that he's clogging at the same time.  The booklet notes suggest that he probably learnt the tune from the commercial recording by the Irish fiddler Michael Coleman, and there are some echoes of Coleman in there, but Carignan was an acknowledged master in his own right.  He is also heard to good effect on Danse Carré, with guitar, harmonica and dance calls, and the compilation as a whole might have benefitted from a lot more of him, but his only other contribution is as accompanist, along with Bob Hill's guitar, to a good-humoured French song, sung ensemble-style by Gerard Delorier, Madame Richard, Aldor Morin and Edgar Morin.

As for the songs in English, overall, I have to say that this is rather a disappointing selection - for my taste, there's rather too much of the polite, parlour-style renditions of songs by the likes of Alan Mills (who gets no less than six songs) and Wade Hemsworth (who gets two).  Some more O J Abbott wouldn't have gone amiss, for example; we hardly get a hint of any evidence of the booklet's note's assertion that he was 'one of the finest traditional singers of his day'.  His Hogan's Lake is a delight, but it's scarcely more than two minutes long.  We're told that he recorded around 120 songs for Edith Fowke, so you would have thought they could have managed more than one here.  The only other unaccompanied songs are a fine murder ballad from Geraldine Sullivan, Anne Haldeman's delightfully amusing A Poor Lone Girl In Saskatchewan and Gaspard Jeannette's Chanson De Riel, sung in masterly unaccompanied style, in Michif (a mixture of Cree and French, it says here); again, you find yourself craving more of this robust traditional singing, but instead Jeanette's track is followed by a rather mannered rendition of Tim Finnegan's Wake by 'classically trained tenor' Tom Kines.

Generally, there is strong emphasis on the comic song, whether the humour is wry or satirical.  The Loewen Family Orchestra's The Northern Trappers Rendezvous, for example, is charming, the kind of thing that you can imagine enlivening the long dark nights in the deep North.  There's also the occasional oddity, like Karen James's The Ballad Of Weldon Chan, a fairly typical topical song of the early 1960s folk revival.  There's some unexpected variety provided by Ruth Rubin's Yiddish Tonts, Tonts!, accompanied by Pete Seeger on the banjo, and a beautiful African-Canadian sacred song from Charles Owens and family, who came from a community near Bridgetown, founded by descendants of Black Loyalists, who had migrated north after the American Revolution.

Less unexpected, given Folkways' longstanding commitment to authentic indigenous musics, but also in my view under-represented here, is the Native Canadian side.  There's William Peaychew's Cree Greeting Song, William Burn Stick's Cree Prisoner' Song, and George Clutesi's Nootka Farewell Song.  I don't know enough about this music to have much that is useful to say about these, but to my ears, they sound undeniably authentic and they are undoubtedly highly evocative.  Clutesi's song is especially haunting and beautiful, and would have made a far more fitting closure to the album than Sandy Stoddard's Moose and Bear Calls (which are exactly that).

Scattered throughout are various other instrumental tracks - there's Arbuckle, Mikkelson and Clifton playing (on fiddle, accordion and piano respectively) a splendid variant of the Heel and Toe Polka, with as much bounce and swing as you could wish for, and a brisk Gay Gordons; there's also similar feet-lifting stuff from Aldor Morin (harmonica), Bob Hill (guitar) and Edgar Morin (jigs - i.e. spoons?).  We are told that since Aldor Morin never mastered the chromatic harmonica, 'he welded together six different diatonic instruments' so that he could effect the required modulation and key changes.  However he managed it, he's hot stuff on this Frankenstein instrument.  The Native Canadian fiddler Lee Cremo is heavily influenced by Carignan, but the notes tell us that his style also incorporates elements of Mi'kmaq fiddling, for which I will have to take their word. 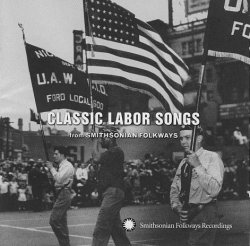 In the USA, the development of the folk revival was inextricably linked with left-wing politics.  Folkways was in the forefront of recording and releasing songs reflecting this relationship and the second of these compilations pulls together twenty-seven such songs, although quite a few derive from sources other than Folkways itself.  It could be argued that this is an album that is less about musical content than the subject matter involved.  Most of these versions of the standards of American agitprop - We Shall Not Be Moved (Joe Glazer, who died in September 2006, aged 88); Roll The Union On (John Handcox); Which Side Are You On? (a short, but muscular unaccompanied version by Florence Reece, spliced into a rather funereal rendition by the Almanac Singers); and Solidarity Forever (also Joe Glazer) - are rousing, stirring and press all the buttons that you would expect them to, but it has to be said that this is a functional role as much as a musical one.

Which is not to say, by any means, that everything here is musically uninteresting - it's the music and the performance as much as the words that makes songs like these work.  Others transcend such considerations - Hazel Dickens's compelling unaccompanied rendition of the coal-mining song Black Lung, for example, is a performance that succeeds on every level, and for me, anyway, so does Larry Penn's poignant truck-driving song, Been Rolling So Long.  The latter perhaps falls more into the category of contemporary Americana than traditional song, but in fact much of what is here has a different set of musical reference points.  There's bluegrass in Joe Uehlein's Hold The Fort and Kenny Winfree's I'm A Union Card, a touch of rockabilly in Joe Glazer's Automation, pounding country-rock in Anne Feeney's We Just Come To Work Here, Tex-Mex in Baldemar Velasquez's De Colores and even a capella doo-wop on Jon Fromer's We Do The Work.  There is also evidence of a continuing tradition of radical songwriting, such as in Elaine Purkey's excellent One Day More.

Many of the great names of radical American music-making in the mid-20th century are represented.  Woody Guthrie sings his own 1913 Massacre (the song from which Bob Dylan nicked the melody for his Song To Woody), and The New Harmony Sisterhood Band sing his Union Maid (for which Guthrie nicked the tune of the old chestnut Red Wing), and they give it a fine Klezmer-style coda into the bargain.  In his inimitable fashion, Paul Robeson sings Joe Hill, surely one of the most moving of all American radical songs, and Utah Philips sings one of Joe Hill's best songs, The Preacher And The Slave.  There are also, of course, miscellaneous Seegers - Pete, Peggy and Mike; the last's version of Cotton Mill Colic is perhaps the most interesting of their contributions, but you could scarcely imagine a selection like this without them.

Both of these compilations are thoroughly annotated and well-presented.  Neither, though, could be recommended without reservation.  Classic Canadian Songs just seems to me to get the mix wrong: to put it simply, not enough of the good stuff.  Classic Labor Songs, by its very nature, must be a partisan choice; it's a collection with a point of view, and however much you might share that point of view, you must acknowledge that, inevitably, it will set limits to its appeal.