It's always a great joy when someone manages to stump-up the BBC's exhorbitant licensing fees and we are able to hear some of the wonderful stuff they collected back in the 1950s.  Sadly limited to once or twice through the tune for the most part, they do provide a real glimpse of how people played and sang as young men and women - 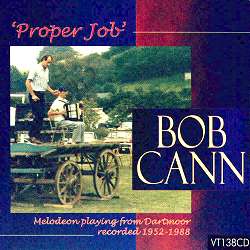 when most of us will only have heard them in their elder years in folk clubs or on commercial recordings.  And Veteran have done just that here, starting this delightful CD with 6 tracks (15 tunes) from the BBC archives.  Further selections from both live and studio recordings trace Bob Cann's musical devlopment through the 1970s, ending with 9 tracks John Howson recorded just two years before Bob's death, aged 74, in 1990.  A total of almost 70 minutes' playing time - and almost every one a winner!

Bob Cann was in his mid-thirties when Peter Kennedy made the earliest of these recordings (1952), and sounds like a completely different sort of player to the man I first heard in the late 1960s.  In fact, by the second lot of Kennedy recordings (1956), he was already sounding different - and not only because he was then playing a different box.  There's a raw energy and dash to his playing in the earlier session,

which has been supplanted by a more steady, a more musically literate style, in the later ones.  It is this style - remaining fairly consistent throughout the rest of the recordings - which the world knows, and loves.  (sound clip - Uncle's Jig).

The ten tunes from 1952 are all local - 'family tunes' as Bob would say, though some have another life with other names in other places (including the oddly titled Seven Step Polka, which is clearly the Seven Steps Schottische - and is played as such.

I assume the former is the name on the label of the BBC 78rpm acetate.  I'd like to include sound clips of all of them, but you'll have to buy the record and be satisfied with just the Scottische Hornpipe for the moment.  (sound clip).

There was a lot of lose talk of Bob having been 'got at by the Society' when I first encountered him.  This is probably complete nonsense - but he must certainly have been influenced by the new people from beyond Dartmoor he met as a result of the BBC records.  How else to account for a radical change of style at the age of around 38, from someone who had been playing the family music since three years old!

I said that his style remained 'fairly' consistent - but we are treated to one glorious example of him reverting to type in an unguarded moment.  At the English Country Muisc Weekend in 1976, Bob and Oscar Woods shared a bedroom in our house - and both had a light-hearted 'go' on each other's boxes.  Oc didn't fare too well with Bob's enormous accordion, but Bob handled the one-row as if he'd grown up with one - as, of course, he had.  I'd completely forgotten the incident, had never heard Neil Wayne's tapes

(despite promises), and had no idea that Bob had played it when the recordings were made.  The result is just wonderful, as you can hear (sound clip - Uncle George's Hornpipe, aka The Cliffe).  Such a pity, in my opinion, that he never played a one-row when he was touring the folk clubs in the '70s and '80s.

Topic's West Country Melodeon LP from '75 and Veteran's own Five Generations cassette of '88 where Bob plays together with his grandson Mark Bazeley (sound clip - Barn Dance).  Good news is that Mark and his musical partner Jason Rice will be recording for Veteran in 2000.

The CD has an extremely handsome cover - all Howson's own work and the best so far, to my eye.  The booklet contains a brief but pretty comprehensive biography, particularly covering the family music-making, and gives both social and technical details of the five sets of recordings from which the selection of tracks was made.  Despite the fact that the record's subtitle is 'Melodeon playing from Dartmoor', I was very surprised that no mention was made of Bob's story-telling or singing.  He was a man of great warmth and charm, and this came across most strongly in his singing - quite and unassuming, yet delivered with great skill - he was able to keep you interested in the story of the most hackneyed of songs (Down in the Fields where the Buttercups all Grow) - and his Nobody Noticed Me was surely a classic of the genre.

An excellent CD in all respects, and especially welcome for the 15 tunes from the hitherto unavailable BBC recordings.