Ask Martin Hayes who the main influences are on his fiddle-playing.  You would expect his father PJ to be amongst them; the other two are others he grew up listening to in East Clare, Junior Crehan and his uncle, Paddy Canny.

Paddy Canny's first solo album comes when the man is in his seventies, although he did share the distinction of playing on the first LP of Irish traditional music, recorded in very simple circumstances in 1959.  The three fiddlers featured on "All Ireland Champions - Violin" were Paddy, PJ Hayes and Peader O'Loughlin.  One of several writers who point out this recording as a real landmark is PJ Curtis who in his "Notes from the Heart" says that it "... captured the pure essence of Irish traditional music at its very best.  Today, almost forty years after its original release, the album remains a much-sought item by collectors and lovers of traditional music alike."  All three were members of the revered Tulla Ceilidh Band at the time of the recording.

Paddy grew up in Glendree, Tulla surrounded by traditional music.  His father, Pat, was a fiddler and the blind fiddler and fiddle teacher Paddy MacNamara lived in their house in the winter.  The three Canny boys all took up the fiddle and Paddy recalls the playing of Martin Nugent as a great influence. 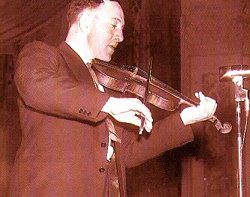 In the last 50-odd years, Paddy has found himself playing everywhere from local house and crossroads dances to major European and American concert halls including the Carnegie Hall in New York, but this quiet unassuming man has largely shunned any limelight that has come his way; he left the Tulla band after 19 years, feeling that it was becoming too much of a full-time job.

This album is well recorded in studios in Galway and Ennis.  Throughout there are subtle, effective yet unobtrusive accompaniments on piano and guitar by Eugene Kelly, leaving the ear to concentrate on the truly remarkable fiddle-playing.  His playing throughout is a revelation.  The first question that comes to mind is, "How could Paddy have played for so many years alongside P Joe Hayes and yet sound stylistically so different from him?"  There is that East Clare quality about the playing of the reels fairly fast, but with a great sense of space and he also shares the feeling of other fiddlers from the Feakle/Tulla area that jigs and hornpipes should be taken a slower pace than the norm, though in Paddy's case this slower tempo seems to be more pronounced than most.  (At a recent set dance workshop, I was told that the Clare set calls for slower hornpipes than the neighbouring Galway or Kerry sets.)   When he plays reels, he sounds as though, like a lot of Irish fiddlers of his generation, he been influenced by the great recordings on 78 rpm of Coleman and the other Sligo/American players, whereas Vincent Griffin, his near neighbour, always sounds as though Scots strathspey & reel players have been part of his listening.

Some say that the wide availability of recorded music to traditional players mean that it a nonsense to continue to talk about regional styles in Ireland.  To a large extent this is true, but it is also the case that a great many players consciously adopt or unconsciously develop the style of the other musicians in their own area.  I have felt that the current overall style of fiddle playing in this great area for traditional musicians is influenced by the fact that they spend so much of their time playing with the likes of Noel Hill, Mary MacNamara and the other great anglo-concertina players.  Thus there is often a feeling of space between each note and a minimal use of slurs, but bags of triplets such as a concertina player would be able to adopt.  Well, this recording knocks such thinking on the head.

Most noticeably, when he is playing jigs and hornpipes, there are the most exaggerated slides and slurs up to notes.  Here's the start of Poll Ha'penny (sound clip) showing a whole range of decoration techniques all executed with fine control.  It gives the music a most exciting and wild feeling and makes him sound as though he is having the time of his life.

There is no doubt in my mind that this album will come to be regarded as one of the all-time classics of Irish traditional music.  The only real puzzle is in why it has been so long in coming.  Perhaps the answer lies in the shy, unassuming diffidence of the man, as described in the album booklet, and in the article on him in Irish Music (December 1997/ January 1998)