If your exposure to Cliff Carlisle has been restricted to the tracks included in CBS/Sony anthologies, you may be accustomed to regarding him as one of a number of Jimmie Rodgers imitators - unquestionably good, perhaps even the best of his kind, but second division more or less by definition.  This CD effectively demonstrates otherwise.  The validity of Rodgers's pre-eminence is endlessly debatable anyway - being country music's first major star is clearly not the same thing as being its first genius - but Cliff Carlisle will stand comparison with any of his great contemporaries.  He developed and refined the blue yodel genre, which Rodgers is commonly credited with inventing, and integrated it into his own style, which was already a model of sophisticated eclecticism. 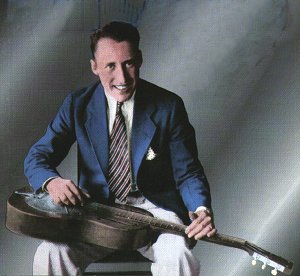 He was a wonderfully relaxed singer, with a highly distinctive voice; a witty and prolific writer, and an excellent guitarist.  Such a combination of abilities was unique among the Rodgers acolytes with whom Carlisle is invariably listed, and is rare enough among musicians of any kind.

His most obvious distinction was that he apparently chose to accompany himself exclusively on lap steel guitar, usually a custom-built National, in a style which was mature by the time he came to record, in 1930.  There has long been a tendency among blues enthusiasts to suppose that steel guitarists like Bill Weldon and Tampa Red had the 'Hawaiian' tag foisted on them by white (and therefore woefully ignorant) record company marketing men.  It is also assumed (and no doubt true in some cases) that white blues players took the slide technique from the black guitarists who influenced them.  Cliff Carlisle presents no such problem: he was modestly forthcoming and articulate about his career, and stated that he had been inspired by the Hawaiian musicians who were popular in his youth, and modelled his own playing on that of Sol Hoopi and Frank Ferera.  It is a matter of record that he presented himself as either 'Hawaiian' or 'Hillbilly' (or 'Cowboy'), depending on where, and to what sort of audience, he was performing.

Although he was perfectly capable of solo performance as necessary (and there are three splendid examples here), he preferred to work with others.  His partnership with Wilbur Ball was six years old when first recorded, and continued for another four.  One of the names under which they broadcast was The Lullaby Larkers, and they may have been, for what such claims are worth, the first yodelling duo.  Ball was replaced in about 1934 by Carlisle's younger brother Bill, a dazzling picker.  He plays on most of the recordings included here, and most of them are, apart from anything else, guitar duets of the highest order.

Cliff Carlisle claimed to have written about 500 songs; judging by his recordings (of which, apparently, there were more than 300), he maintained a high standard.  Many, of course, were variations on successful themes, as is only to be expected of recordings which were issued only two at a time, by various companies, in various relatively small markets.  Favourite themes were farmyard bawdry and domestic strife, both tackled with a charming lightness of touch.  His treatments of sex were not limited to the adventures of Shanghai roosters and ringtailed tomcats, of course; one of his non-zoological metaphors, in That Nasty Swing, concerned the phonograph, and pre-dated Robert Johnson's famous Phonograph Blues.  Like many of Carlisle's saltier offerings, That Nasty Swing was issued under a pseudonym and marketed as 'straight' (i.e. 'black') blues.  Probably the best known of such titles, to British listeners, is his Ash Can Blues, understandably not included here, since it is available again on Sony's 'White Country Blues' set.

Naturally enough, his tunes, too, were often variations on a theme.  His most familiar tune (Rodgers's Blue Yodel) crops up six times, here, and twice more in a truncated form - which is not very often, all things considered.  Lonnie Johnson boasted of having written 200 songs to the same tune.  There's at least as much variety, and a great deal more sheer exuberance, in Cliff Carlisle's potboilers.  Some of his songs are classics of their kind (did you know that Elvis Presley's Just Because was one of his?); and his treatment of traditional songs and standards was equally distinctive and distinguished.  Examples here include Columbus Stockade Blues, Trouble Minded Blues (Trouble In Mind) and Black Jack David (previously available on an early Old Timey anthology).

Given that this is on the Arhoolie/Folklyric label, it would be reasonable to suppose that it's basically a reissue of the two LPs that were released on Chris Strachwitz's Old Timey label.  Were that the case, this CD ought to be high on the shopping lists of those replacing, however reluctantly, their vinyl collections.  As it is, this compilation is more important, and essential, even than that.  Of the 24 tracks here, exactly half appeared on the Old Timey LPs.  The rest include two alternative versions, Hobo Blues and Shanghai Rooster Yodel, both quite different from the previously available recordings.  Incidentally, nothing here is duplicated on White Country Blues, either. The different selection may not be entirely a matter of choice, as the material issued on LP was drawn from Bob Pinson's collection, while these recordings were supplied by Gene Earle.  (There's a trainspotter's soap opera in there, somewhere.)  However, notable omissions this time include Carlisle's lovely version of Uncloudy Day, and all or any of his 'cowboy' titles.  Perhaps the 'cowboy renaissance' of recent years has not overcome the common prejudice against such material, amongst folkies and old-timey enthusiasts.

In any case, there's a great deal more material to be had; if this album sells as well as it ought to, there surely must be another volume to come.  With any luck, it will include much more of his gospel work, and whatever is available of the records he made with his young son, Sonny Boy Tommy.  This set has only one of each.  The Uncloudy Day mentioned above is an example of both; for another, listen to the MT cassette Old Ship Sailing For the Promised Land.  (See our Products page).

In the meantime, this is an endlessly enjoyable collection which should establish Cliff Carlisle's rightful reputation.  The man was a giant.  The CD is a must.