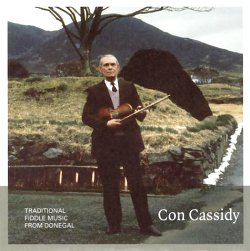 The late fiddler Con Cassidy (1909-1994) from Teelin in southwest Donegal is one of those Irish musicians whose name is far more familiar than his own playing.  Like Martin Wynne, the still not precisely identified Dowd of #9 fame, or the piper William Jackson, tunes attributed to Con have been recorded more than a few times and certainly still feature in sessions in his native county.

Of course, there have been previous recordings of his playing.  He was one of the four featured Donegal fiddlers on the compilation album The Brass Fiddle (Claddagh CC44CD; 1986) - there would have been five, but Danny O'Donnell would only agree to be included if his fiddling was piano-accompanied - and he also featured on the unpublished Topic album Pass the Time (12TS 397; 1979) intended to accompany Feldman and O'Doherty's The Northern Fiddler book, as well as a locally-produced cassette O Bhun Sliabh Liag (Forge Brae FBC 007; undated).  So, unless one happened to be visiting his locale from the 1960s onwards (after he'd returned to Teelin following fifteen years spent working in London) and, boy, would one have loved to have been there on those occasions in the 1970s when Con regularly played with John Doherty when the latter was based in Carrick for a time!

Con was an unusual musician in two ways.  Firstly, he will not instantly sound like a Donegal fiddler to those accustomed to the more robust sound of say the Dohertys,

the Campbells, the Byrne brothers from Kilcar, his cousin Frank Cassidy, or (of more recent vintage) Tommy Peoples or Stephen Campbell.  Secondly, his quieter tone and the innate delicacy of his playing (listen to any of the Highlands for examples - sound clip: Maude Millar's) reflect his own natural diffidence.  In comparison to other local musicians he described himself as 'the worst of them' and 'only a rasper' and regularly announced that others could play a particular tune better than him.

This tremendous CD supplies all the evidence to the contrary of the above second point.  Issued by the Donegal Fiddlers' Association (and available from www.donegalfiddlemusic.ie) - and the first of its releases to focus on the work of one musician; the others were all live recordings from its summer schools in Glencolmcille - the recordings of Con all date from his mid-seventies.  These include music for two RTÉ radio programmes, The Long Note (1983 and 1985) and The Green Groves (1984), as well as recordings made by David Hammond for a film in the TV series Faces of Ulster, and previously unreleased sessions from the time of the aforementioned Brass Fiddle.

The net product reveals a fiddler who, despite his self-deprecation, was completely at one with his music, skilled in all manner of tune forms and played his fiddle with an innate understanding of its and his own capabilities and, above all, a telling wit.  For examples, listen to his joyful version of My Love is But a Lassie Yet or his sheer inventiveness in the playing of The Frost is all Over.  The utter sweetness of his music is to the fore in The Speaking Waltz while the single jig Taibhse Chonaill reveals that even Con's occasional rawer edge is still refined by the dexterity of his fingering.

and three tremendous duets with Dermot McLaughlin, including a dynamic version of Cuffe Street with the octave-different technique of 'reversing' well to the fore.  However, the album reserves probably the best recorded example of Con's playing until the last track.  The reel Seán sa Cheo (played here in G minor, rather than the usual A), via its subtle combination of delicacy and drive, encapsulates all that was great, good and glorious about the music of Con Cassidy. (sound clip)

Featuring a distinctive cover shot of Con taken by Éamonn O'Doherty, the album's liner booklet includes previously unpublished photographs of the fiddler, and a detailed essay on Con's life and music by Dermot McLaughlin who also provides hugely informative notes on the tunes recorded and Con's versions of them.  The production values of the overall package fully reflect the high esteem still held in Ireland for the life-enhancing music of Con Cassidy.