In English, Los Cenzontles are The Mockingbirds, an ensemble of Mexican-American teenagers who "study music, dance, verse composition and instrument building at Los Cenzontles Mexican Arts Center in San Pablo/Richmond, California," to quote from the booklet notes.  This is their first CD under their own name, although they have issued a number of cassettes, and guested on a children's CD by Los Lobos and Lalo Guerrero. 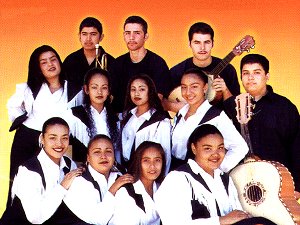 All together, there are 22 Cenzontles, and between them they cover vocals, jarana, guitarrón, vihuela (all members of the guitar family), trumpet, harp, violin, saxes, clarinet and the percussive dance steps of the zapateado.   Various combinations of mockingbirds appear, assisted by 'faculty and friends' of the Arts Center on violin, vihuela, tuba, trombone, trumpet, electric bass, jarana, clarinet, guitarras and guitarrón.   Norteño accordion wizards Santiago Jimenez Jr and Lalo Guerrero make guest appearances, Jimenez on five tracks and Guerrero on a single title.

There's already been some discussion in these electronic pages of what constitutes traditional music, and of the unavoidable impact of the mass media.  I'm not going to get into the detail of that, but I will admit to putting the CD into the player with some apprehension, fearing that I was about to hear either a Mexican-American version of Fame (at least I wasn't so pessimistic as to expect a version of Sir Paul McCartney's Liverpool version of Fame), or a young people's equivalent of those Eastern European folk ensembles with fixed smiles who used to visit London from time to time, peddling curiously zest-free choral arrangements of folk songs.

It turns out, of course, that I should have trusted the good taste of Arhoolie's Chris Strachwitz - and that of Keith Summers, who wrote in his covering letter that Los Cenzontles were "just about the nicest little thing I've heard since Christmas."  The Arts Center where they study evidently aims at the preservation and development of the Mexican-American musical heritage, in a subculture as much under siege as any other by both its own and the majority's pop culture; but it does so by encouraging the youngsters of Los Cenzontles to apply their talent and their enthusiasm, both of which are enormous, to that heritage.  There is no attempt to freeze time by the sterile replication of the past, and this music is lively, supremely well played, and immensely enjoyable.

It's also remarkably varied, although given the lineup of instruments, and the number of possible combinations, that's perhaps not surprising.  The CD begins with a live, unaccompanied Corrido del Maiz Caro, telling in choral style of a famine in the fifties, a performance which simultaneously establishes that the Mockingbirds are aware of their roots, and quite some musicians.  Thereafter, a range of popular Mexican styles is explored: the accompaniments are described as "Banda, Conjunto Norteño, Mariachi y Conjunto Jarocho", and accordingly the instrumental lineups range through brass and reeds, accordion and bass, trumpet and violin, and those wonderful, funky harps, all with the various members of the guitar family tellingly deployed in addition.  The numbers include corridos, rancheras, a couple of sentimental boleros, a canción, and sones from Jarocho and Jalisco.

Occasionally, one is reminded that these are teenagers, and perhaps not always quite up to the emotional demands of the music; they don't, for instance, entirely achieve the passionate sexual disdain required for Que Cobarde (unlike Carmen y Laura's electrifying version on Ideal, which has been reissued by Arhoolie.)  On the other hand, Los Cenzontles' rendition of El Corrido de Cecilia Rios, about a murdered teenager, is heartbreaking.  And when they're having fun, which is most of the time, boy does their enjoyment come across!  For example, Perita en Dulce (Candied Pear), with Santiago Jimenez playing flashy - but decidedly not superficial - accordion, is a breakneck ranchera which seems to indicate that the dueña is a lady of the past: "Quisiera ser dobladillo de tu corta minifalda, pa' rozarme con tus piernas, ay cajeta de Celaya." ("I'd love to be a fold of your short miniskirt, so I could rub against your legs, sweet caramel from Celaya.")  In simlar vein is La Sarna (Scabies), a son jarocho with harps and zapateado, which is really about quite another sort of itch.

This seems a good point at which to point out the one shortcoming of this CD, which is Arhoolie's infuriating habit - here and on other releases - of only transcribing, and where relevant, translating, selected lyrics (here we get only 10 of the 22 tracks).  It's obvious from the tense, pinched, and very successful delivery of La Bruja that the lyrics are significant, and it helps if you know that bruja means 'witch'.  But in the absence of a transcription, non-Spanish speakers are left baffled about the specifics of the song.  Perhaps I could offer the magic words smaller typeface as a possible solution to the problem?