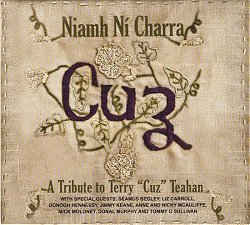 In order to put this delightful CD into its proper context, I'll here quote extensively from Niamh Ní Charra's Introduction:

In 1928, at 23 years of age, Terry 'Cuz' Teahan, concertina player, single-row accordion player and budding composer, emigrated from his home in Cordal, Glountane, Co Kerry to Chicago.  He spent the following six decades becoming one of the most loved and respected musicians of the very strong Irish music community there, playing right up until his death in 1989 at the age of 84.  While he spent three quarters of his life in America, it was the music of Sliabh Luachra, the music he grew up with and was taught by the illustrious Padraig O' Keeffe, among others, that he played and was associated with most.

In 1986, three years prior to his death, he visited Kerry relations on what was probably his last visit to Ireland.  While there, his niece took him to see a local seisiún group performing for the tourists in Killarney, and there he saw a local girl, still in primary school, playing concertina and fiddle.  Very taken with this girl, at the concert's end he approached her and her father and chatted with them both for a couple of minutes ...........

This ten-minute conversation was not the last of the interest Cuz showed in my younger self, however.  On his return to Chicago, he sat down in his kitchen and recorded an hour-long tape of tunes, some of which he learnt from the aforementioned Padraig O' Keeffe, and some of which were his own compositions.  He also talked to me throughout the recording, giving advice and information on the music, and occasionally singing the odd verse of song that went with a tune.  It is over 25 years since that tape was recorded and it is still a prized possession.  It seems that I was not the only recipient of such generosity, but it also seems that other such tapes are all either in private collections or have been lost.

I therefore decided that the best way to thank Cuz for his generosity was to pay tribute to him through an album.  I wanted to introduce Cuz to those that may not be familiar with him and give a glimpse into the roguish character of this man and legend who has lent his name to so many tunes played by musicians all over the Irish Music World, a man whom I met for a mere ten minutes but who took such careful interest in me all those years ago and who continues to talk to me and give advice, years after his passing.  I felt the best way to do this was to include a mixture of his own compositions, many of which are played regularly without the true identity of their composer being known, along with a selection of tunes associated with Cuz which he passed on and in doing so helped preserve.

I also wanted to bring on board musicians who all knew and were influenced by Cuz, and to my delight everyone asked accepted not just graciously but with enthusiasm, as they all felt this tribute and recognition were long overdue.

In her hand-written note to me along with the review copy of the CD, Niamh describes this as a 'labour of love' - and indeed, love shines through the entire work.  And short clips from the abovementioned tape recording - a verse of a song, once through a tune - from Cuz, appear at regular intervals through the record.  It really is a lovely thing, and it's hard to keep an emotional tear from the eye whilst listening to it.

Unless Niamh's selection of tunes is untypical of the Teahan repertoire, the CD also shows quite dramatically how the music played in rural Ireland in the early part of the last century differed from the choices made by musicians in the latter half.  It's all slides, polkas, hornpipes and highlands ... only three reels are found amongst the 35 tunes played here.

The 24-page booklet and 8-face Digipak give a huge amount of information about Terry Teahan and the music on the CD, and the special guests, Seamus Begley, Liz Carroll, Donogh Hennessy, Jimmy Keane, Anne and Micky Mcauliffe, Mick Moloney, Donal Murphy and Tommy 0 Sullivan, who contributed so willingly to this project.  Of Cuz himself, we learn that he got his nickname because, whenever he encountered a newly emigrated Irishman in Chicago, he'd tell them where to find accommodation, work, sessions, friends ... "Tell them I'm your cousin" he'd say!  Similarly, the embroidered CD sleeve is explained by the fact that during and after the Depression, when work was hard to find, Terry took up embroidery and ended up eking out a meagre living by selling his pieces.

OK - so what of the music?  As might be expected, it's all beautifully played and recorded, the accompanyists do just that - but also make a very tight band when required.  Some favourite tracks?  Well, here's a bit of track 1, and a couple of Cuz's own compositions, the slides Dave Kennedy's Gift / Cuz Teahan's Favourite.  On track 7 are the polkas Anne Sheehy McAuliffe's / Mickey Chewing Bubblegum - apparently, not many people realise he wrote the second one.  On track 9 is a barndance not written by Kerry Mills (although he actually did write one) followed by one Cuz wrote for the opening of the Celtic Park in Chicago in 1985, so probably one of his last compositions; Kerry Mills / Gaelic Park.

To make a bit of a change, here's Niamh with a song, Is Ar Éirinn Ni Neosfáinn Cé hí, which was Cuz's mother's favourite song, and one of the few she sang in Irish.  And to make an even more complete change, here's a bit of the final track; some more slides, the first traditional, the second probably a Teahan composition - though he was never quite sure if he'd written it or not!  The Hair Fell Off My Coconut / Minnie Looney's.

As you've just heard, a truly wonderful record, made with love and care by an enthusiast ... who could ask for more?