The fact that Child’s great ballad collection has been out of print for 36 years (the blurb to this edition says ‘over 40’) has hampered both singers and scholars who missed buying the 1965 Dover reprint (although the collection is available on the Web); is this ‘corrected second’ edition going to make good this state of affairs?

Frances James Child was the nineteenth century Harvard scholar who, largely from printed sources, assembled, categorised and numbered 305 of The English and Scottish Popular Ballads, published between 1882 and 1898.  It was a massive and monumental work, for despite the ‘English’ and ‘Scottish’ in the title it was an international piece of research - his references alone include thirty different language sources.  Although there have been arguments about some of the ballads he canonised, very few omissions have come to light (the late David Buchan suggested ‘The Trees They do Grow High’ and its close cousin ‘Young Craigston’ should be ‘Child 306 and 307’ respectively) and the work has proved invaluable to both scholars and singers.  As fashion has swung away from ‘purely literary’ and ‘text-based’ studies to more ‘oral/aural’ and ‘context-based’ research, there has arisen an unfortunate modern tendency to belittle Child’s great achievement, 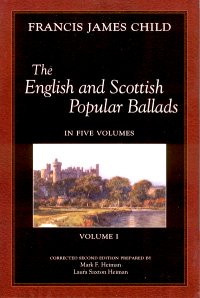 usually by those who themselves display not a tenth of his scholarship, industry and understanding.  Fortunately of late serious scholarly aficionados such as Sigrid Rieuwerts and David Atkinson have ably redressed this state of affairs.

This volume is issued by a Loomis House Press in Northfield, Minnesota, whose website portrays it as ‘Specializing in resources on balladry, traditional music, folklore, and folk-life’, although this appears to be its first such publication.  No information is given about the ‘re-editors’, Mark and Laura Heiman; they would also appear to be new to the field of ballad studies.

What has this brave pair done to justify the words ‘corrected’ and ‘second’ in the title?  One of the problems with the 1880’s original - Child having died before the final parts were published - was that Child’s additions, afterthoughts and corrections were simply tacked on to the end of the volumes as they were issued - over 250 pages of appendages (providing a fair number of pitfalls for those who omitted to check for them); purchasers were left to make their own corrections in the texts.  The Heimans claim to have inserted all these amendments and corrections into the actual ballad sections, as Child would have done had he lived.  On the one hand this gives us most usefully the final presentation he would have wanted; on the other hand, in order to make these amendments, it has led them to abandon the Dover solution of simple facsimile reproduction of the 1880’s originals; they have attempted to produce an edition:

painstakingly converted to digital form, newly typeset, and corrected according to Professor Child's own notes.  All cross-references and index entries have been updated to reflect the new pagination, and the original page numbers are noted in the margins as a reference aid (info@loomishousepress.com).

Even if the editors claim that, apart from ‘slightly regularising’ the punctuation (why do editors have this desperate itch to meddle?), they have made no other changes, this re-setting of the entire text opens the gates to transcription and other errors.  A random check, for example, of The Twa Sisters (Child 10) shows that although in his original Appendix to Volume 1, Child corrected the phrase in verse 10 from 'for a water' into 'for water' this change has not been incorporated into this 'second corrected' edition, which continues to print the mistaken 'for a water'.  This edition may need handling with caution - and checking with the original Child before use.

Comparison with the 1965 Dover edition highlights other problems.  The paperback edition under review is smaller than that facsimile.  The text is too close to the binding and the pages are difficult both to open and to keep open, which is tedious and tiresome; they certainly could not be flattened like the Dover for photocopying without breaking the spine.  In front of me is David Buchan’s set of the Dover - displaying only some slight cracking of the spines after a lifetime of almost daily handling by that thorough scholar; this present volume is going to have a very much shorter life, being too tightly bound for convenient use, which in turn will lead to the spine soon becoming wrenched.  A reference book which can’t be left open at the desired page (or photocopied) - this is thoughtless production.

A true ‘second edition’?  It must be said that the new layout, with more typefaces and styles than in the original, is very much more attractive, and is pleasingly presented, especially as quite frequently the music has been given, either inserting Child’s scores or those of Bronson (although the editors understandably warn that the connection of text and tune may be imperfect).  The new layout has naturally resulted in repagination, but the sites of the original pages are carefully indicated.

As a bonus the editors have incorporated Child’s ‘rarely seen’ popular essay 'Ballad Poetry' which first appeared around 1874 and was recently reproduced in the Journal of Folklore Research 31 (1994), 214-22.  This gives considerable insight into Child’s thinking after he had published his ‘first go’ of English and Scottish Ballads in 1857-9 and was in the process of researching and reconsidering his last great work.  It may not be Child’s ‘final statement’ that we all wish he had lived to make, but it comes close in many ways, and nicely compliments the original Introduction to the 1880’s English and Scottish Popular Ballads made by Child’s successor, George Lyman Kittredge (retained in this volume).

It would have been even better if the opportunity had been taken to add a modern biography and perspective on Child such as Sigrid Rieuwert’s essay ‘In Memoriam: Francis James Child’ from the International Ballad Conference publication Ballads into Books; The Legacies of Francis James Child (Bern: Peter Lang, 1997), or indeed, David Atkinson’s invaluable ‘A Child Ballad Study Guide with Select Bibliography and Discography’ (even including online resources) from the same volume.  Furthermore, much has been recently discovered regarding the nitty-gritty of his research methods, as ably demonstrated, for example, by Mary Ellen Brown in her recent edition of the correspondence between Child and the Scottish ballad authority, William Walker (The Bedesman and the Hodbearer, Aberdeen: Elphinstone Institute, 2001).  Perhaps the final volume in this series will incorporate such essential material.

So is this a genuine ‘second edition’ such as Child himself might have issued?  One answer could be ‘yes’ - and he would certainly have approved the highly attractive presentation, having a great eye for beauty.  But is it really ‘corrected’ to a standard the great man would have achieved?  Very difficult to say, if the faulty transcription/correction of the above randomly selected ballad is at all typical.  Serious scholars may well find they need to check it first against Child’s original publication or the Dover facsimile edition, although singers will find it much more usable than either - especially if they buy the cloth edition (provided it really ‘features a library-quality binding and sewn signatures for years of use’, as the website - loomishousepress.com - claims).

Since this review was published, Mark Heiman has pointed out - and Ian Olson has accepted - that his criticism regarding The Twa Sisters (above) was incorrect, and that a subsequent Child amendment had confirmed that the Heiman version is correct.

Further to this, Loomis House have announced that they intend:

As each volume is completed, we will export the contents into a structured database to allow for complex searches and comparisons, and make this information freely available to the Internet community.  Watch for news about this service after the publication of Volume I.

Once publication of the five-volume set is complete, we hope to make this material available in a searchable CD-ROM format.

Both of which must be seen as admirable sevices to the ballad community - Ed.
Site designed and maintained by Musical Traditions Web Services   Updated: 25.5.02