Describing the background to Folkways Records should scarcely be necessary for anybody who reads Musical Traditions.  Suffice to say that for almost forty years, the label's founder Moses Asch used it to release a wide range of music of various kinds, with a strong emphasis on traditional and ethnic sounds from all over the world, as well as broadly covering the early US folk revival.  Now, it is run by The Smithsonian Institute, and continues to release new recordings in the spirit of the label's legacy.  Just as importantly, the Smithsonian has undertaken to keep the entire vast back catalogue 'in print', in the sense that any record that was ever issued on Folkways can now be bought on CD.  This is a hugely honourable and commendable commitment, which is fulfilled by virtue of 'custom pressings' - i.e.  if you want a copy of any LP from the Folkways catalogue, however obscure, they will produce a one-off CD-R for you.  At the same time, they have reissued many of their best-selling LPs in digital format, and have put together compilations of various kinds - of which these are two - offering listeners samples from the riches of their archives. 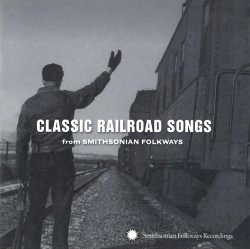 With Classic Railroad Songs, the emphasis is on the songs' content, and the performers are a mixed bag, including both traditional singers and revivalists, as well as some who sit somewhere in between.  In that last category, I might include Cisco Houston, a man who comes with a mighty legend behind him - friend and travelling companion of Woody Guthrie, comrade of Pete Seeger (who is also heard here in a delightful performance of Jay Gould's Daughter), inspiration of Bob Dylan.  Writing as someone who has only ever heard Houston on record, this reputation seems to me hard to square with the almost plummy-sounding baritone to be heard here on a rather stiff rendition of Drill Ye Tarriers.  Guthrie himself, on the other hand, did convey on record quite a lot of the unique charisma that so captivated the young listeners who encountered him.  This version of John Henry, where his vocals - tough, gritty and entirely distinctive - were sweetened slightly by Houston's harmonies, and pushed along by his own uncomplicated guitar strumming, with Sonny Terry's blues harmonica, is a good example.  Nobody else ever made records quite like this.

By contrast, Rosalie Sorrels is almost an archetype of the American 1960s folk revival, with her clear vocals and neat fingerpicked accompaniment, very much of its time.  Also very much of the revival - though reaching, with no little success, for a more authentic sound - were the New Lost City Ramblers, most enjoyable, as is Mike Seeger's solo New Market Wreck.  The other singer still living (although I'm not sure whether he's still performing) is Doc Watson, another mighty traditional musician, both of whose tracks offer fine examples of his authoritative vocals and dazzling guitar work.

The relatively small proportion of African American singers represented is probably a fair reflection of the Folkways catalogue as it was - this is one area where other labels eventually outstripped them - but I have no complaints about Furry Lewis's excellent Kassie Jones, Sonny Terry's train workout, Brownie McGhee's Freight Train Blues and three good numbers from Leadbelly.  And it's a special treat to have Elizabeth Cotton's classic Freight Train (a piece every 1960s folk guitarist had to learn).

The remainder of the tracks are by more obscure, and sometimes quite unlikely, figures, and it's a tribute to Folkways eclectic sweep at the tradition that it picked up people like these.  For example, L M Hilton was a police officer, whose unaccompanied Zack has to be one of the few traditional songs on the subject of Mormon polygamy; Vernon Sutphin was a white harmonica player, but his instrumental Lost Train Blues is black in virtually every respect; Henry Grady Terrell was black, and it's nice to have his individual take on the John Henry legend (recorded as late as 1981), rendered as a worksong, to contrast with the more familiar one offered by Woody Guthrie.  That leaves a handful of stringbands, including a couple from the 1970s, later than most of the rest of the collection, as well as the Stoneman family, veterans of the pre-war commercial record catalogues scene, on a 1950s recording, ironically of rather poor sound quality.

The disc is topped and tailed by recordings of steam engines; this is the sort of thing that I know some people can get very excited about (and it is another aspect of what Folkways covered), but for me they're just right at 24 and 25 seconds long respectively.  That the compiler has had no trouble putting together 27 songs on the subject (no doubt drawing from a very much larger number available to him) is an indication of the historic importance of the railroad in the United States, and the massive impact it had on the lives of the ordinary people who were the original sources of these extraordinary songs - of comparable significance in its time as the internet is in our own, as Jeff Place suggests in his notes. 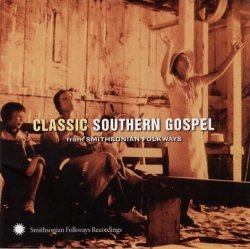 Classic Southern Gospel is a very different kind of compilation.  This is traditional (white) religious music from end to end (and yes, I'm well aware that including bluegrass groups in that description could be problematic).  Every track is an unalloyed delight - beautiful melodies, breathtaking traditional harmonies, powerful singing and outstanding instrumental skills are to be enjoyed time after time, often all at once.  There is so much here, it's difficult to select a few tracks to highlight, but I could mention the too-brief fragment by the Old Harp Singers of Eastern Tennessee, unaccompanied group harmony singing that is haunting and utterly captivating; or the consummate bluegrass briliance of Red Allen's Are You Washed in the Blood; or the Watson Family's The Lost Soul, led by Doc's father in law, Gaither Carlton - achingly beautiful music.

There's a very satisfying coherence about this whole selection, but within the boundaries of white gospel music, there's scope for all sorts of variation, such as the electric guitar (very discreet) in the Poplin family's fine River of Jordan, or the beautiful female harmonies from Hazel Dickens and Alice Gerrard.  There's a duet between two giants of American music - Bill Monroe and Doc Watson - in What Would You Give in Exchange for Your Soul, and there's the sounds of ordinary members of the congregation of the Indian Bottom Association of Regular Baptists (an enthralling, hypnotic example of lining-out - astonishingly, from 1993).  There's classic bluegrass from the Country Gentlemen and an old fashioned husband-and-wife duet from Harry and Jeanie West, the nearest thing here to folk revivalists, as such.  There's deep roots from Ernest Stoneman with his autoharp and from Dock Boggs with his banjo, and there's a more contemporary-sounding (but still very traditionally-based) performance by the Allen Brothers, from 1980.  And there's plenty more that don't particularly need to be expanded on here, but that maintain the high standards and fit perfectly into this company.

Anybody who bought Folkways LPs back in the day will no doubt remember well the heavy covers of thick cardboard, each of which had an additional divider of card inside, creating two sections - one for the disc itself, and one for a specially written booklet that provided background information about the music.  The apparent authority of these booklets was one of the foundation stones of Folkways' considerable reputation.  So it was a huge surprise to read in Sam Charters's autobiographical compilation Walking a Blues Road (Marion Boyers, 2004) that many of these sets of notes were, in fact, written by people with little expertise in the subject.  He himself had written quite a few of them, using random pseudonyms, and in fact he now claims not even to remember which ones.  Does this undermine Folkways's towering status?  Well, maybe, but the fact remains that they released extraordinary amounts of music that most other record companies would never have touched, and in the end that's what really matters.  Nowadays, the authority of the annotators used seems unimpeachable, and as ever both of these discs are attractively presented, with substantial booklets, using evocative design and well-chosen photographs to illustrate supporting information on the music in general and on each individual track.

I've had great pleasure from listening to both of these discs, but if I had to choose between them, there's not the slightest doubt in my mind as to which one I would pick and why.  Folkways Records was pioneering, and like many pioneers, they saw their legacy extended and in some areas overshadowed by those for whom they had beaten the original path.  Subsequent labels penetrated more deeply into some of the areas that Folkways had explored first, and by the mid-1960s, their heyday was pretty well over.  As a result, I can't shake off a sense that some aspects of their work now seem somewhat dated.  I'm aware that the word 'dated' seems an odd description in this context - what I'm getting at is that in retrospect, some of what Folkways recorded in its prime seems specifically redolent of the period in which the label was operating.  For example, the perspective on the blues that centred so much on Leadbelly/McGhee/Terry would not survive long into the 1960s as people like Son House, Skip James and John Hurt were rediscovered and came out of retirement.  I wonder what later audiences would have made of Cisco Houston, if he had lived longer, and there are a few other minor indications.  Maybe I'm responding to something that would be invisible (or inaudible) to most potential buyers of Classic Railroad Songs, and it would be absurd to make too much of it, especially in relation to an anthology that offers us rarities as obscure as the likes of Vernon Sutphin or Henry Grady Terrell.  Either way, I don't feel that way at all about Classic Southern Gospel whose contents seem quite timeless - a beautiful, wonderful selection that I would recommend to anybody.  I doubt if any other label ever surpassed the work Folkways did in recording music like that.