"I can't remember where I heard that Josh White's mother could play autoharp.  My nephew and I visited and recorded her and her grandson playing autoharps while she sang.  She was around 80 at the time and strummed with a clothespin."

These few words I hope give a hint of the delights and surprises in store for anyone picking up this outstanding release. 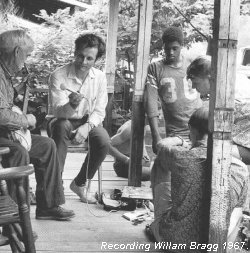 It contains 38 tracks of traditional American musicians, black and white, familiar and obscure, recorded by Mike Seeger between 1952 and 1967 and, though apparently by no means exhaustive, can be fairly termed, by this reviewer at least, as pretty exhausting.

The issue of such collections has recently gathered pace thanks to companies such as Folkways and Rounder, but what sets this volume apart from most others is its focus, admittedly unstated, on links with country music's 'Golden Age' of 78 recordings.  A fair proportion of the artists here either recorded in the Twenties and Thirties or were closely associated with others who did.  And it is surely no coincidence that six of the performers (Ashley, Robertson, Boggs, McGees, Stoneman and the Carter Family) appeared on the ground breaking and vastly influential 'Harry Smith Collection' (recently re-issued by Smithsonian Folkways) which would have seen its initial release at the exact moment that Mike was trying work out how to use his first tape recorder.

No finer example of this thread can be given than the informal recording of Texan fiddler Eck Robertson accompanied by Mike and the New Lost City Ramblers.  In 1922 the Victor Record Company gave Robertson his first opportunity to record (and then become the first American rural musician to do so commercially).  Forty three years later, during the 1965 Newport Folk Festival, Mike Seeger gave him his last.

An even greater star of the Twenties, Ernest Stoneman, was still musically active with his family when in 1962 Mike recorded him in his Maryland home.  An all too brief hymn, accompanied by his wife Hattie's pump organ,

is included here, as is the only known unaccompanied ballad to be recorded by Clarence Tom Ashley, a major and superb performer.  Pretty Fair Damsel (sound clip) is a perfectly paced version of the old British ballad Seven years since I courted.

Mike was also a close friend and musical associate of Maybelle Carter and here we are treated to a warm and relaxed, but eminently satisfying reunion with sister, Sara.  But more yet.  On the flimsiest of leads he manages to track down in New York City one Lesley Riddle, the black guitarist credited by Maybelle as teaching her blues guitar in the Thirties.  His bottlenecked John Henry reveals an outstanding performer.

If he had done nothing else in the field though, Seeger's rediscovery and extensive recording of Dock Boggs of Norton, Va. in 1962 would have secured him the gratitude of all old time music enthusiasts.  Boggs was an exceptional talent -

his singing and banjo playing a powerful cocktail of wild mountain music and deep blues - who is currently undergoing a deserved renaissance.  Here he reprises his classic Sugar Baby (sound clip) from the Harry Smith collection.

But for any musical tradition to survive it must evolve, and two vastly influential musicians from the Thirties get a second bite at the apple. 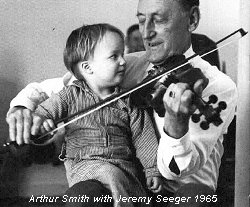 Snuffy Jenkins, accredited with creating the three-finger banjo style developed by Earl Scruggs to become 'the voice of Bluegrass', and Fiddlin' Arthur Smith, whose smooth but driving bow action dominates contest fiddling to this day, both turn in exciting performances.

Not all the musicians here of course had commercial aspirations.  Most were simply content to perform for friends and family and the six tracks by the Sutphin family highlight this aspect of the tradition.  J J Neece, a wonderfully archaic fiddler, his son Cleve Sutphin,

an exciting banjo player and his son Vernon, given his first harmonica by the great Henry Whitter, make fine neighbourhood music both individually and together as here on John Henry  (sound clip).

As I've said, this is a long recording and space prevents a detailed comment on all the tracks, but a few highlights should not go unmentioned.  Fiddle music naturally features strongly and two men stand out.  Sherman Winner, who once recorded with Frank Hutchison, plays a superb tune learnt from the legendary Ed Haley, while Will Adams performs some of the most intense Afro-Irish-American music you're likely to hear.  The great autoharp player Kilby Snow (a full CD soon I hope!) sits alongside Bill and Jean Davis, a dulcimer duet whose slurred notes on John Henry are the result of a strategically placed popsicle stick!  A superb white gospel quartet 'field recorded' from a Sunday afternoon radio broadcast in 1967 contrast with a hilarious monologue, half preaching -

half medicine show, recorded at the Union Grove Fiddlers' Convention the same year.  And just listen to this introduction to a mountain hymn by one Clarence Ferrill.  (sound clip)

Clearly Mike Seeger is no ordinary folk music enthusiast.  Born into an extraordinary family of musicians and musicologists, how many teenages in the Fifties could boast a household domestic the likes of the wonderful Elizabeth Cotten?  Her recording debut as performer and Mike's as collector open this CD.  But reading through the fascinating, occasionally gripping, notes you are reminded exactly how much this man, with his quiet and easy charm, has actually achieved.  This collection is a fitting testimonial to that lifelong commitment.  I trust that it does not end here.