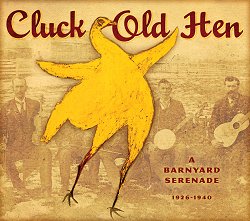 You can put together an anthology about anything.  We've been through the regional, the topical, the historical, the instrumental, and various others that seem logical.  In what is still a comparatively small catalogue, Old Hat Records have previously released discs covering, among other things, string band music from North Carolina (Music From The Lost Provinces, CD 1001); blues fiddle (Violin Sing The Blues For Me, CD 1002); music from the medicine shows (Good For What Ails You, CD 1005) and ... um, songs about barbecued meat (Barbecue Any Old Time, CD 1008).  That last was an interesting notion, and the music the subject offered up had much to recommend it, but Cluck Old Hen has to be one of the most random yet - a selection of songs and tunes, in early recordings, about chickens.  Why?  Well, I suppose, why not?  The producers claim that it's 'America's favourite domestic fowl', which is probably true (I'd have thought that the turkey has a more particular association with America, but these days maybe its role is ceremonial as much as nutritional).  Certainly, chickens have been the subject of plenty of American songs.  I suspect the same isn't true to the same extent, of British and Irish songs, although no doubt we could come up with a list, if required.

A lot of people who made music on records in the USA in the pre-war years came from communities that were rural or semi-rural, or maybe one generation removed from the rural, and so had a more direct relationship with poultry than we do today, when our closest experience of it tends to come either shrink-wrapped in a supermarket, or cooked in sauce on a plate.  Old Hat offer examples from various different genres, including blues, old timey, jazz, comedy, western swing and more (including one French Canadian example, the opening track).  There's no questioning the fact that the selection has been very well thought out - each of these recordings is a little gem in its own right.  And let's also make it clear that the sound quality is astonishingly good - the clarity of what you hear, track after track, speaks of access to the finest copies of the originals, and outstanding skills in extracting the best possible audio from them.

Cliff Carlisle and Casey Bill offer contrasting approaches to the acoustic steel resonator guitar; there's no comparison - despite the apparent similarity of format, they're musically worlds apart.  The Dixieland Jug Blowers' Hen Party Blues illustrates just how thin is the line that divides blues and jazz - not that there really is such a line, other than a discographical one.  If there was one, you'd definitely put the Six Jumping Jacks firmly on the jazz side of it and The Georgia Browns firmly with the blues, even though Who Stole The Lock is no 12-bar.  We could debate for hours about where Teddy Bunn & Spencer Williams sit in that taxonomy, as long as I can spend that time listening to Bunn's gorgeous guitar playing.  The Tune Wranglers' Chicken Reel Stomp is Chicken Reel with a then-contemporary swing to it, but it's still Chicken Reel.  The Leake County Revelers and the Binkley Brothers play traditional dance music with that characteristically wistful air that all the best old timey musicians somehow manage to bring to it.

Walter Rhodes's take on Charley Patton's Banty Rooster Blues eschews the guitarist's rhythmic complexities and declamatory vocal style for a rather plummy delivery, a brisk swing, and a jolly accordion riff.  It's almost disorientating, but in a sense a valuable artifact that somehow manages to be revealing about the song - the modern ear often misses the humour in early blues.  Which brings me to a pretty steady theme that is maintained throughout this selection - one of the reasons why there's a lot of songs about chickens is that for one reason or another, people find them amusing.  Fiddlers have fun trying to mimic their clucking sounds, other players lampoon their ungainly movements, singers tell tales of what chickens get up to, as well as of what happens to people who love eating chicken.  Lyricists of a more imaginative inclination weave surreal images of chickens in balloons or flying to the moon.  And of course, there's the whole double entendre potential of roosters and hens.  The humour leaves a bit of a nasty taste when it has the racist undertones of Honeyboy & Sassafras, but this is history, and I'm certainly not suggesting that it should be suppressed.

If I'm completely honest, for all the excellence of its contents, for all its entertaining potential, an anthology like this will never have the same grip on my imagination as one like In The Pines, Old Hat CD 1006, or Gastonia Gallop, Old Hat 1007, both of which I've reviewed for MT, and whose particularity of selection and contextualised presentation adds value to what I get through my ears.  When all's said and done, this is a selection of songs about chickens, with no real need to be more than the sum of its delightful parts.