Songs of the West Virginia Miners

Drill Man Blues / Going Democratic / The Snitcher (George 'Curley' Sizemore); Bill Green Better Run On / I Can Tell the World What the Union Has Done / I Dont Want to Go Down Yonder (The United Four Quartet); Coal Digging Blues / The Brave and Trembling Motor Man (Jerrel Stanley); A Little Lump of Coal / Its On in Washington; John L Lewis Blues / Union Blues / How Beautiful Union Must Be / The Union Coal Mines in the Sky (Orville O J Jenks); The Battle of CIO / Coal Miners Versus Machine Loaders / Bartley Mine Disaster (The Evening Breezes Sextet); Cheer the Union Travelers / Union in My Heart (The Rising Star Quartet)

In the spring and early summer of 1940, George Korson, a journalist turned folklorist from Pennsylvania, who had already published two books of miners songs

1 based on his collecting activities in his home state, travelled to the South to record and document similar material in West Virginia, Virginia, Kentucky, Alabama and Tennessee. 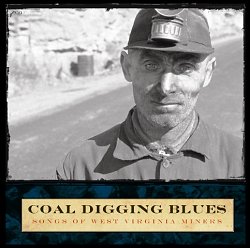 He published the results of his work in a third book

2 and much later there was an LP

3 and ultimately a CD

4 of some of the original recordings.  While the LP and CD drew their content from across the geographical range of Korson’s field work, this present disc focuses on West Virginia and gives more space to each of the singers or groups covered.

Korson played an important role in redefining the limits of folklore to encompass both songs from industrial cultures and songs that were newly composed, and whose authors were often his own first-hand sources.  One example of this would be George ‘Curley’ Sizemore, from Lochgelly, West Virginia, the first singer heard on this disc.  As heard here, Sizemore had a light and pleasant voice, but the fact is that, as he sings in Drill Man Blues, ‘the dust has settled on my lungs and causes me constant pain’, and what we are hearing is likely to be a pale shadow of the voice he had sung with in his younger days.  From the little we know about him, as recounted in the booklet notes, the song is clearly autobiographical; Sizemore suffered from silicosis, brought on by his years in the mines, and given that his condition meant that he had to rest between takes (and his songs here last only 1:35, 1:02 and 1:18 respectively) we can consider ourselves fortunate to be able to hear his work at all.  His second song Going Democratic, is a campaign song in which he urges his fellow union workers to ‘vote for Franklin D.’, while The Snitcher warns them against the influence of anti-union workers.  Sizemore’s songs are all in straightforward language, with clear images based on the miners’ own experience, or on biblical stories that most of them would have been well familiar with.

Jerrell Stanley provides the title track, Coal Digging Blues and the notes suggest that this shows the strong influence of Jimmie Rodgers.  It’s true to some extent, in that he uses - in that song - the familiar blues structure and the short bursts of yodelling between verses, but I reckon there’s much more to Stanley than that.  His ‘high and lonesome’ vocal style and the nervy energy of his guitar accompaniment seem to me to speak of a background with roots in Appalachian tradition, which makes him much more interesting than the standard Rodgers copyists of the day.  For further evidence of this, there’s the intriguing counterpoint set up in The Brave and Trembling Motor Man by the fact that while he plays a nippy 3/4 rhythm on his guitar, the tune is quite definitely in 4/4.  This is not - in my view, anyway - incompetence, but rather more a case of somebody with a distinctive and different musical approach.  Unfortunately, these seem to be the only songs he recorded.

Motor Man was written by another of the singers here, Orville ‘O J’ Jenks, who is in fact the star performer on the disc, with six songs, and he deserves the exposure.  According to the notes, Jenks travelled around the coalfields on the union’s behalf - ‘carrying the union message in ballad form.  His presence assured the success of a union meeting’.  You can see why - there is no side to these performances whatsoever - each song is sung in a uncomplicated manner, with every word plainly articulated, the message always clear and unambiguous, supported by a simple chorded guitar accompaniment, functional enough never to distract from the lyrical content, while still always musical.  Jenks has a haunting, high voice, which in person must have been really quite compelling, and his use of tunes that would have been familiar to his listeners - such as Hungry Hash House for Union Blues and a Gene Autry hit song for The Union Coal Mines in the Sky - would have helped to get his message across.  But even while, in our contemporary context, we can enjoy listening to Jenks, there are jarring reminders of what gave rise to this music in the first place.  It might be pushing it to suggest that the lyrics of the former deliberately encouraged physical attacks against scabs, but they remind us of the violent reality of the industrial disputes faced by these miners trying to improve their working conditions and their financial rewards.

While the white singers used the traditional or popular country song idiom, it’s interesting that the African-American music represented on the disc (and so presumably representative of what Korson collected there) does not reflect a secular style, such as blues, but a sacred one.  It’s true that West Virginia was never one of the great blues states, but this distinction still seems significant, somehow, especially as the ways in which the quartet style is used reflects what is quite a radical secularisation of the idiom.  It should also be said that while the styles used by Sizemore, Stanley and Jenks might be described as already starting to be anachronistic by this date, two of the three quartets included here - The United Four and the Rising Star - are fine examples of the contemporary jubilee genre, and easily the equal of many of the groups that were recording commercially around this time.

In a similar way to the white singers, the groups’ songs adapt lyrical formulae familiar from the gospel repertoire, to the union’s purposes.  It would be interesting to know what the church thought about all this.  While the original jubilee song, You Can Tell The World clearly posits the Christian life as the source of salvation and joy, the variation on it sung here by The United Four, I Can Tell The World What The Union Has Done is quite clearly citing the union as a saviour on earth, every bit as potent as the heavenly one.  Their Bill Green, You Better Run On takes a similar approach; while it would normally be a sinner who had to run from the Lord, here it’s Green (a national union official who was regarded as having betrayed the workers’ interests) who has to run from John L Lewis (the leader of the United Mine Workers of America and one of the key figures in setting up the Congress for Industrial Organisations).  I Don’t Want To Go Down Yonder is certainly about avoiding hell, although not for the usual reasons, but because it’s full of scabs and because ‘Bill Green is down there’.  This last track lasts more than four minutes (a third or so longer than a commercial recording of the time), giving the group ample opportunity to show how they could build up the almost hypnotic excitement that must have thrilled its original audience - an outstanding performance.

The Evening Breezes Sextet is the least adventurous stylistically of the three quartets included (note that these groups were referred to generically as quartets, even when they had more than four members).  They harmonise very effectively and their lead vocalists are excellent, but they use few of the vocal or rhythmic tricks that characterised some of the more successful quartets of the day.  They didn’t need to - their role, on this evidence, was to tell stories and to make a point, and they do that very well.  Their Bartley Mine Disaster is a moving and powerful tribute to the 91 miners who were killed in a disaster that had happened only a few months before the recording was made.  One of the Rising Star Quartet’s songs refers to the same disaster, but with very different musical results.  Their two songs use some of the syncopation and swing effects that would have been known to their listeners from the popular recordings by The Golden Gate Quartet and the Heavenly Gospel Singers.  Union in My Heart works particularly well in that regard, especially the way the lead singer repeats the word ‘Union’ in the chorus - a beautiful and very effective arrangement.

If I might be permitted a small reservation, it’s only to say that I would have liked to have seen the lyrics to each of the songs included in the booklet, given how important they are to the subject.  Otherwise, I can find little to complain about regarding this highly satisfying release, which gives exposure to important voices that have been unheard for almost seven decades (I think it duplicates two tracks with the Rounder CD, but I’d say it was still right to put them in this context).  The sound quality varies a bit, across the disc, but I’d rather hear The Evening Breezes’ The Battle of CIO with a little of that rough noise than not hear it at all, and most of the time, the reproduction is clear and untroublesome.  Mark Allan Jackson’s notes are useful and informative, giving a general introduction to Korson’s project, as well as notes on each song.  Some well-chosen photographs complete a well-designed package.

1.  Songs And Ballads of the Anthracite Miners, 1927; Minstrels of the Mine Patch, University of Pennsylvania Press, 1938.

2.  Coal Dust On The Fiddle: Songs And Stories of the Bituminous Industry, Folklore Associates, 1965 (originally published in 1943).

3.  Songs and Ballads of the Bituminous Miners, Library Of Congress LP AFS L60.

4.  Songs and Ballads of the Bituminous Miners, Rounder CD 1502.